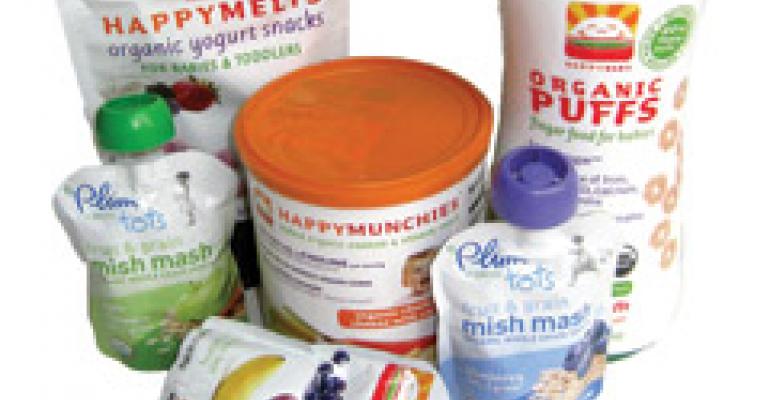 PARENTS OFTEN LAMENT THAT their babies grow up too fast. Time flies. Before Mom and Dad know it, their little bundle of joy is walking out the door on the first day of kindergarten. Retailers feel the loss, too. With significant investments in inventory, space and promotion, they'd love their customers to spend a little more time in the supermarket baby aisle. It's gotten scrunched down, said Duran

PARENTS OFTEN LAMENT THAT their babies grow up too fast. Time flies. Before Mom and Dad know it, their little bundle of joy is walking out the door on the first day of kindergarten.

Retailers feel the loss, too. With significant investments in inventory, space and promotion, they'd love their customers to spend a little more time in the supermarket baby aisle.

“It's gotten scrunched down,” said Duran Taylor, natural and organic grocery buyer for Market of Choice, Eugene, Ore., describing the baby sections in his eight stores. “Right now it's 4 feet, which is not enough room. Ideally we should have at least 8 feet.”

Retailers like Taylor note that the size of the baby aisle is among the more flexible in the supermarket. During times of high birth rates, it can expand to accommodate the extra demand; displays contract during lulls. He thinks that the situation is changing again.

“There wasn't a lot of call for it, though in the last several years it's like we're starting another baby boom,” Taylor said.

Taylor's hunch is correct — to a point. The birthrate in the United States reached an all-time high of 4.3 million in 2007, but the latest statistics from the Centers for Disease Control and Prevention indicate that the number of births declined 4% between 2007 and 2009 — a trend that continued through the first half of 2010.

“Some researchers have linked the recent fertility decline to the economic recession,” CDC researchers stated in their report, “but it is not possible with birth data alone to identify the factors shaping the fertility rate decline.”

The sales peaks and troughs demonstrate just how difficult the baby aisle can be to manage. Managers regularly adjust planograms based on sales activity, yet new product development continues to fill shelves. Interesting flavors and flavor combinations are exciting the palates of tykes, while packaging innovations make nutrition much more portable for busy, young families.

The category is important to retailers. According to Mintel, it was worth $5.7 billion in 2009. Sales have been down, but supermarkets still capture the vast majority of sales. Luckily for retailers, parents with babies aren't keen on shopping multiple stores. The research firm's findings show that supermarkets have been able to maintain their overwhelming share of the baby food and drink category at 81.1% in 2009, which represents a slight drop of 0.8% from the year before.

Figures provided by other market research companies reflect a smaller market, but similar movement. SymphonyIRI Group statistics — covering food/drug/mass, excluding Wal-Mart, for the latest 52 weeks ending March 20 — show sales topping $3.6 billion, down more than 5.5% from the year before. Most of the activity ($2.6B) is aimed at formula and electrolytes, while the remaining sales are devoted to food and beverages ($945M).

Overall, purchases have slid, particularly for formula. The good news for retailers is that sales within the toddler subcategory remain positive, with snack-type foods performing best. Studies analyzing the category's performance note that the shift from formula and infant foods to later stage entrees and snacks reflects the age progression of the children born from the last baby boomlet just prior to the recession.

At Heinen's, Roberts says he's noticed the sales ripple down his sections, which average 6 feet in the independent's 17 stores. Where the emphasis earlier was on baby foods, it's now evolved into products for older tykes.

“We carry all the stages of food, you know, first stage, second stage and a third stage, based on the progression of the child's diet,” he said. “We put in one brand of organic, and that's all dabbled in with age-appropriate snacks and treats, regular and yogurt juices, and entrees.”

Like the little consumers it serves, the baby category can be temperamental. Sales wax and wane with peaks in the birthrate, the economy and related factors. The fickle nature of the department requires managers to expand and contract inventory in a way that maintains adequate sales. Organic is a growing presence in the category, and will likely become a dominant influence in the coming years.

A small number of retailers, such as H.E. Butt Grocery, San Antonio, have secured strong reputations by making their baby sections a destination. It's not an action plan all retailers choose to pursue, according to Jim Hertel, managing partner at Willard Bishop LLC.

“Baby has emerged as one of those categories that retailers define as ‘strategic,’” he said. “A lot of them will look at it as an opportunity to reach emerging families before their purchasing patterns have become fully ingrained.”

Hertel says that operators who invest more deeply in the baby category share a common vision: They look beyond short-term financial performance and instead see the “art” of the aisle, which is a function of strategy.

“If you just ran the numbers, you might have 8 or 10 or 12 feet of baby products, just based on performance,” he said. “When you start to look at strategic intent, however, retailers are investing in 40 feet of floor space, and in inventory dollars. It just goes to show just how far they've bought into this vision about grabbing that emerging consumer.”

Willard Bishop recently completed a study that provided the firm with a total-store view of how supermarkets are shopped. The “Top Shoppers” syndicated study included an examination of the baby section, which led to some insights, Hertel noted.

“The retailers who make a commitment to this category on a strategic basis, are really investing in what I would categorize as pretty valuable space,” he said.

Manufacturers of baby food understand the threat to their shelf space and are constantly reinforcing the aisle with new products. The emphasis on organic toddler foods has been a cornerstone of that effort.

“It's a new and exciting subcategory and there's a lot of innovation that we're seeing in it,” said Shazi Visram, founder and CEO of HappyBaby. “The demand in mass has been there for quite some time.”

The company, based in New York, manufactures a variety of toddler-friendly products, including pouches, puffed grain snacks called Happy Munchies, and handheld meals like salmon fish sticks or macaroni and cheese patties, marketed under the HappyBites label.

“Toddlers love to feel in control at that age, so giving them something that they can use to feed themselves is ideal,” Visram said.

To that end, the pouches have become a best seller for the company, which offers 20 pouch food products for babies and tots. Some flavors include apple & butternut squash; sweet potato, carrot, apple & cinnamon, and spinach, mango & pear.

“They're a great way to get vegetables into a child's diet,” Visram added. “It helps kids develop a taste for vegetables without having to show them what they are — yet.”

At Market of Choice, Taylor agrees that pouches are becoming the preferred unit of sale for consumers.

“They could have fruits or veggies in there, or whatever,” he said. “It doesn't matter. Kids just love to squeeze those pouches.”

Another baby food manufacturer believes toddlers are an underserved market. Plum Organics, New York, has even developed a special term for the little ones: The Independent Eater.

“Toddlers are constantly moving,” said Sangita Forth, Plum's senior brand manager. “They might be seated at a table, but because they're so active they may be eating their snacks while they're running around or at the playground.”

Plum Organics claims it was first-to-market with pouch foods in 2009. According to Forth, the company expects pouch sales to experience a compound annual growth rate of 7.4% over the next 5 years.

“The shift to this kind of packaging reinforces the fact that the consumer's need is changing,” Forth said. “There's a huge focus on the convenience factor, and that's something that's equally important to parents seeking healthier food options.”

Not to be outdone, the Hain Celestial Group's Earth's Best brand of organic baby food recently expanded its investment in pouch products, introducing a line of shelf-stable purees in nine varieties. The line shares features that have made pouches preferred among parents: They're resealable and can be refrigerated after opening.

The packaging is also environmentally friendly. Plum's Forth says one truckload of pouches is equal to nine trucks of glass jars.

“Because of the overall eco-footprint, there's significant benefits not only to the consumer, but also the retailer because they require fewer resources,” she said.

Peach, coconut and salba. Blueberry, oats and quinoa. Combinations like these make it tough to call it baby food. But it is — thanks to innovations in flavor, texture and packaging. Manufacturers are today capable of influencing little taste buds like never before.

Indeed, a look at the company's pouch products reveals ingredients that could tempt adults.

“With things like blueberry and the quinoa, you're talking about foods that have developed a reputation as being superfoods, and are embraced by adults,” noted Jim Hertel, managing partner at Willard Bishop LLC, a consulting firm. “Now children have a chance to get off on the right foot and learn to enjoy these foods at a very early age.”

And what's good for baby is good for Mom and Dad. Shazi Visram, founder and CEO of HappyBaby, New York, says her company has known for some time that adults also use the pouches.

“Because the label is so clean and the ingredients are pure, we'll hear that people drink them after a run, or take them on a long bike ride,” she said.