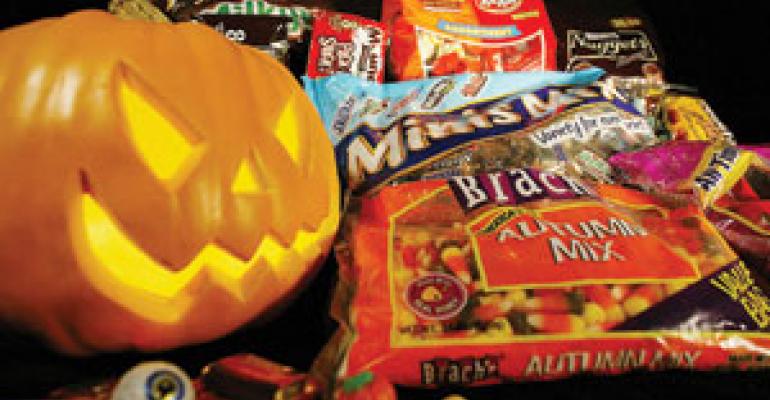 Halloween is the sweetest season of the year for candy marketers. But it's getting scarier for conventional food retailers as they battle drug stores and supercenters for a bigger bag of treats. Although supermarkets do most of the business for confectionary, the unsettling news is that they're not really growing, said Jenn Ellek, spokeswoman for the National Confectioners Association, Vienna, Va.

Halloween is the sweetest season of the year for candy marketers. But it's getting scarier for conventional food retailers as they battle drug stores and supercenters for a bigger bag of treats.

“Although supermarkets do most of the business for confectionary, the unsettling news is that they're not really growing,” said Jenn Ellek, spokeswoman for the National Confectioners Association, Vienna, Va. Meanwhile, “confectionary sales are going through the roof at the supercenters and drug stores.”

Although supermarkets are the most popular destination for Halloween candy, members of the channel haven't seen any growth in fourth-quarter candy sales in three of the last four years, according to data from Chicago-based Information Resources Inc.

Supercenters get higher rings, since they sell larger bags of candy at higher retail prices than supermarkets, Ellek said. Consumers like to buy candy at drug stores because they often find better variety than what's available at the supermarkets.

Halloween is the No. 1 holiday for the $28.90 billion candy industry. This year should be sweeter than 2006, with sales of Halloween treats expected to reach $2.18 billion, up from last year's $2.15 billion. The projected increase is attributed to the marketable days there are in the season and the fact that Halloween will fall on a Wednesday, the NCA noted.

Retailers are gearing up to prepare for the demand.

“Overall, candy sales peak the week of Halloween, making it the highest-selling week of the year,” said Michael Overschmidt, category manager of candy for Roundy's Supermarkets, the privately held chain of 154 stores operated by Chicago-based Willis Stein & Partners. After Halloween, Valentine's Day, Christmas and Easter are the other major candy holidays.

To keep up with the competition, supermarket chains make sure that their Halloween candy assortment is extensive. Long before there's any frost on pumpkins, loads of Halloween candy begin to arrive at supermarkets. In recent years, some stores have begun merchandising Halloween displays soon after Labor Day.

Hand-stacked displays are put up near the store entrances where customers can't help but notice them. The large assortment includes several different candies from 19 vendors. They also include salty snacks, in small portion-controlled packs with Halloween images, aimed at trick-or-treaters or for school or home parties, said Lynn Tingle, grocery buyer for Mars.

To compete with mass merchants, the stores usually mark down the prices on their best-selling products, such as the Hershey snack-size packs.

To sell through the candy inventory, associates will transport candy out of stores where movement is slow and merchandise it instead at higher-volume stores, Tingle said. Mars operates 18 locations.

While other retailers may offer a handful of candy varieties, Mars stores believe shoppers appreciate being able to choose from a wide assortment of sweets, Tingle said. She thinks the broad selection sets stores apart from competitors.

At family-owned Big G Foods, it's not unusual to see candy sales triple in the days leading up to Halloween, said Brian Grafft, who is responsible for operations at the 25,000-square-foot store in Marengo, Iowa. This year, Grafft's goal is to avoid running out of the most popular brands of candy, a problem that's cropped up in previous years. Brach's Mellowcreme Pumpkins and Candy Corn are among the favorites with Grafft's customers, he said.

“We're trying to be more efficient,” he said. In past years, “we felt we missed so many sales; we could have growth by upping the quantities.”

Also key is making sure product displays are visible. Grafft said the store normally sets up candy displays in more than one location.

“I believe strongly in multiple locations to maximize impulse sales,” he said. For Halloween, shoppers can find candy in five or more locations in a typical store, including displays near the checkout lanes, as well as unexpected places such as the dairy and fresh produce departments, he said.

What are the best tricks for building Halloween sales? Overschmidt thinks it's crucial to have several organized displays of candy. They should be kept looking neat and uncluttered, he said. It's also essential to keep top-selling merchandise in stock throughout the season.

Candy manufacturers have been getting ready for the holiday through innovation. Nearly one-third of all candy sales within the last two years was attributed to new products, Ellek said. For Halloween, candies will be in disguise, much like the school children going out trick-or-treating. Consumers will find popular candies shaped like pumpkins and bats, as well as old favorites wrapped in packaging that's “tricked-out” for Halloween, Ellek said.

On their websites, manufacturers are giving consumers ideas for baking with candy, as if snacking wasn't enough. Recipes for brownies, witches' brew, spooktacular chocolate cupcakes, Jack-o'-lantern cakes and monster feet cookies include candy in the ingredients.

The sites also encourage visitors to get into the spirit of the holiday by providing links to online party invitation makers, and tips for holiday costumes and pumpkin decorating. One site even features creepy music.

“Halloween is something we always put a lot of marketing muscle behind,” said Ryan Bowling, a spokesman for Mars Snack Food U.S., McClean, Va. “It's always a very competitive time period for us and the industry.”

At the stores, retailers see interest in tried-and-true items. Bags of individually wrapped candies in smaller sizes are the holiday's bread and butter, Overschmidt said.

“We'll significantly increase the assortment of larger bags” for Halloween, he said. “The trend across the industry seems to be larger-size bags, often with an assortment of flavors or bars in the same bag.”

Halloween is still a source of sugar highs for shoppers. While everyday demand for sugar-free candies is growing, along with product variety, those items are not sought out for Halloween, according to the retailers SN interviewed.

“Day in and day out, the number of sugar-free SKUs has doubled,” Grafft said. “Much more assortment has come out. But I haven't seen much offered around Halloween time.”

Although it's a growing niche, organic candy hasn't made a splash for Halloween yet either. “It's not in our market yet,” Grafft said.

Chocolate is a perennial favorite. Consumers like to stock up on bags of candies and bars for Halloween, including Reese's Peanut Butter Cups, Hershey's bars, Snickers and 3 Musketeers. Grafft and Tingle said those items are among the most sought-after at the stores.

In addition, dark chocolate has caught on with shoppers who like the slightly bitter flavor. Some studies have linked dark chocolate to health benefits not found in milk chocolate. For instance, studies have shown that consuming flavonoid-rich dark chocolate may lower blood pressure and cholesterol and improve the body's processing of sugar.

“Consumers are making the choice to go with dark chocolate vs. the milk,” Ellek said. “It's been growing for the last couple of years.”

Some shoppers are not willing to take a chance on new products. For example, consumers at the Mars and Big G stores buy items that are familiar to them, such as Brach's candy corn and other old favorites.

“We do try to have some new things,” Tingle said. “But the old candies that we have do very well.

When it comes to growing candy sales, supercenters, drug stores and convenience stores leave supermarkets in the dust.

The other retail formats have posted growth in candy sales at the expense of supermarkets, according to the National Confectioners Association and sales trend data from Information Resources Inc.

Having studied the best strategies for building sales, the NCA encourages food retailers to tweak their candy aisles. It's worth it, NCA spokeswoman Jenn Ellek said, since gross profit margins on candy range from 20% to 30%, depending on the product.

The NCA offers the following tips to retailers:

“We did a lot of research,” she said. “We polled moms. Their biggest [complaint] was that it's hard to find the candy they're looking for — everything runs together and you can't tell what's where.”
— L.M.