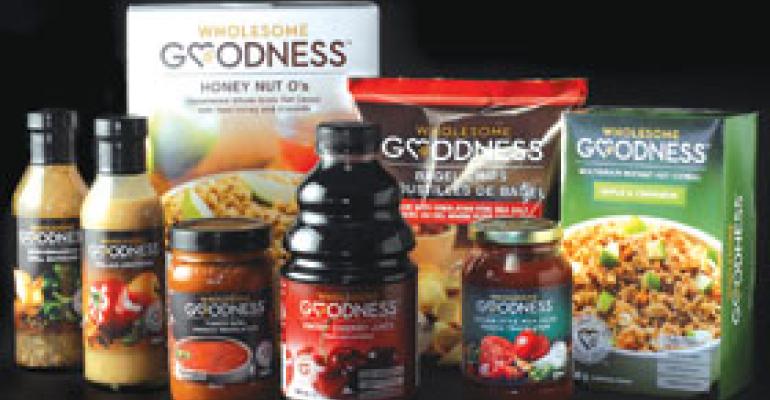 As reported, the 85-stockkeeping-unit line started rolling out this month in Wal-Mart Stores' Canadian supercenters. The assortment is comprised of dry groceries, including pasta sauce, salty snacks, juice and cereal — all priced about 30% less than national-brand equivalents.

The tagline is, “Bringing delicious and nutritious together like never before.”

Each item contains only natural ingredients, and has limited sodium, sugar and fat. Wherever possible, beneficial nutrients like fiber and antioxidants are emphasized.

Perimeter and nonfood items are under development, though Walmart Canada has not committed to them yet, according to Seelert.

Though Wholesome Goodness LLC owns the brand, it acts as a Wal-Mart private label since Wal-Mart is the only Canadian retailer to carry it. Because of this, it's poised to compete against better-for-you store brands from other retailers, including Blue Menu from Loblaw Cos.

“This is Wal-Mart's intelligent answer to the category,” said Seelert.

The brand caters to those who want to eat healthier but have not acted on it. That could be because of confusion about better-for-you foods. Some consumers still don't understand the difference between natural and organic, while others are overwhelmed by the vast number of research studies and shelf-edge nutrition guidance programs, Seelert said.

Consumers are also unclear about what makes one brand different from another. That could be because many better-for-you products look the same in terms of packaging color and wording.

“They all look and feel the same,” he said.

At the same time, the wording on the front of packaging of many wellness brands is similarly stark and uninviting, Seelert added.

“The language is uninventive and controlled,” he said. “It's almost pharmaceutical.”

Another reason consumers don't purchase wellness foods is because they fear they won't taste good. Despite advancements in taste, flavor and texture, people often remember the time they tried a healthy item and didn't like it.

“The history of bad-tasting food stays in their mind,” he said.

Wholesome Goodness was designed to create a warmer, more approachable brand. Packaging photography shows the beauty of the food, while wording is bright and inviting, Seelert said.

The result is a brand that assures consumers they won't sacrifice anything — either money or taste — by eating better, Seelert said.

“We saw a gap in this marketplace given what was out there,” he said.

“It took time, but we created a better barbecue sauce with simple ingredients,” Seelert said.

Wholesome Goodness LLC hopes to bring the brand to other Wal-Mart stores in Canada, and eventually to the U.S. on a channel- and market-exclusive basis.