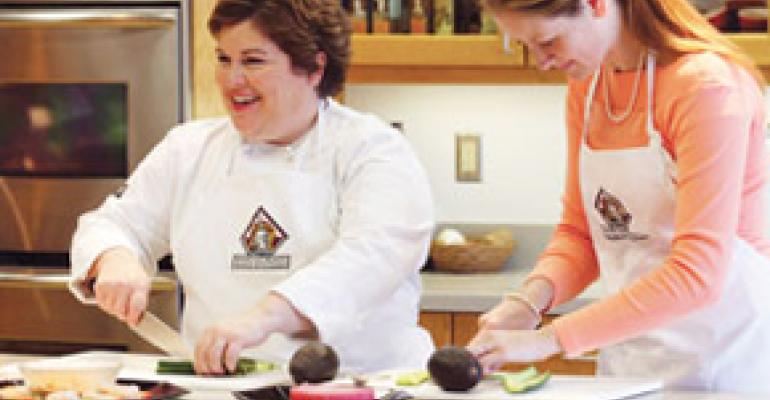 The aromas of restaurant favorites like Cheesecake Factory's Cajun Jambalaya Pasta and P.F. Chang's Salt and Pepper Calamari evoke memories of freer discretionary spending for some, but for students at Dorothy Lane Market's Restaurant Replica cooking class, the scents signify another addition to their recipe box. The classes, and recipe distribution programs like it, are welcome relief for generations

The aromas of restaurant favorites like Cheesecake Factory's Cajun Jambalaya Pasta and P.F. Chang's Salt and Pepper Calamari evoke memories of freer discretionary spending for some, but for students at Dorothy Lane Market's Restaurant Replica cooking class, the scents signify another addition to their recipe box.

The classes, and recipe distribution programs like it, are welcome relief for generations of consumers with gourmet tastes, little spending money and even less cooking experience. They also serve as an opportunity for retailers to demystify specialty ingredients.

Although Americans are willing to dust off their kitchen appliances to help manage costs, many are finding they're ill equipped to produce the quality and flavors to which they've grown accustomed.

“We've become a nation of food snobs,” said Marcia Mogelonsky, senior research analyst at Mintel, Chicago. “We like to have a lot of flavor and a lot of quality, and now, because of the economy, we're looking for ways to replicate those tastes at home.”

The trend is alive and well at upscale DLM, where shoppers ranging from college students to widowed seniors and those who've been newly divorced quickly fill up cooking classes that focus on everything from producing comfort foods to preparing inexpensive cuts of beef.

“We have waiting lists for our basic classes,” said Carrie Walters, corporate chef at the three-store Dayton, Ohio-based chain.

In addition to creating and teaching new recipes to students, Walters is charged with coming up with DLM's private-label concoctions, so wherever possible, she includes store-brand specialty ingredients — such as DLM's extra virgin olive oil — in recipe lists that are distributed to students. Classes are held next to DLM's Washington Square location in Dayton, so participants usually shop there for meal components when they're ready to make a dish at home. Class costs range from $35 per person to $135 per couple, depending on the topic and the length of the class. Walters helps students get the most bang for their buck.

“We also spend time creating tips for how to use things like black olive tapenade when you've bought a 16-ounce bottle for a recipe that only required one tablespoon,” she said.

Retailers who likewise fulfill shoppers' desire to get better acquainted with specialty foods stand to benefit from the higher premiums often attached to these items.

The National Association for the Specialty Food Trades' 2008 consumer study, performed by Mintel, revealed that there is a market for specialty ingredients, at least among consumers of specialty foods. For the study's purposes, they were defined as those who had purchased specialty foods within the past six months. More than half of respondents (56%) said they had.

Conventional shoppers also seem to be giving branded varieties of specialty foods a chance. Though financial pressures prevent Americans from dining out as often, many consumers reason that specialty food items are affordable luxuries that contribute to the savings realized by eating at home.

“People are thinking, ‘I can take the family out [to eat] for $35, or I can go to the store and make something special,’” said Ron Tanner, vice president of communication and education for the NASFT, New York.

Mogelonsky concurred. “This is the one thing that will help save the specialty food industry from taking a huge nosedive,” she added.

Although she foresees certain areas of the segment slowing, food types linked to dietary restrictions, such as gluten intolerance, may build momentum.

Carrie Taylor, dietitian at Big Y, Springfield, Mass., is teaching shoppers how to prepare treats like Glorious Gluten Free Granola Bars as part of a month-old video feature on the Living Well, Eating Smart section of the retailer's website. The videos are being promoted on three interstate highway billboards, and in-store with window clings and bag stuffers.

Filmed in the kitchen of a local public television station, the recipe segments feature restaurant-quality foods that take all levels of dietary needs and culinary experience into account.

With recipes like these, Big Y seems to be hitting a sweet spot, according to a recent poll of primary purchasers of gluten-free foods for their households. It revealed that the level of dissatisfaction with the taste of packaged gluten-free foods is so pronounced that 70% of respondents believe they can do a better job baking these products than manufacturers and retailers.

The study, which was commissioned by the Gluten Intolerance Group of North America and tasteslikerealfood.com, also found that 71% of respondents agreed that “It's hard to find good-tasting gluten-free foods,” and 79% admitted “I have wasted a lot of money on gluten-free foods that didn't taste good.”

Homemade foods that are free of gluten also seem like a welcome option, since some products cost two to three times what their conventional counterparts sell for.

“Making these kinds of notations for shoppers could be very helpful, and it shows a level of awareness of allergen issues,” she said.

Allowing shoppers to taste recipes also helps eliminate any sort of apprehension they might have about specialty ingredients.

Mogelonsky applauds Rochester, N.Y.-based Wegmans Food Markets for the success it's had with its chef-staffed meal stations. Shoppers are invited to engage with the chefs, taste recipes, add ingredients to their carts or purchase premade versions nearby.

Lately the retailer has incorporated a wide variety of mushrooms into its meals, Mogelonsky observed.

“People are pretty used to portabella, but hen of the woods can scare a lot of people away,” she said. “It's one weird-looking mushroom, but here the expert is manipulating the product and he demystifies it, so he's got a line of people enjoying free samples.”

Wegmans sometimes expands on this concept with chainwide events that focus on several sampling stations throughout the store. Its latest was a four-hour Get Back on Track event scheduled for Saturday. It was to feature simple recipes for meals like Salmon Lettuce Wraps made with Wegmans Spicy Thai Ginger & Rice Soup, and Super Parfaits, including ingredients like Wegmans' Organic Food You Feel Good About Yogurt.

Store-brand offerings like these are appealing to both mainstream and strictly natural and organic shoppers.

According to Matthew Saline, chief executive officer of Mambo Sprouts, a cultivatable audience for natural and organic meal ingredients lies within the segments' existing shoppers.

More than six in 10 natural and organic consumers are cooking more meals at home, while close to half (49%) buy private-label organic products.

“Demand for premium foods is definitely on the increase, as consumers are economizing by dining out less to offset rising costs,” he said.

DLM is updating its recipes as part of an effort that could help drive specialty sales. Online recipes, and those distributed in-store, are part of the initiative.

“Someone might say, ‘What can I do if I buy this Meyer Lemon Infused Olive Oil,’ and the store associate will help find a recipe for them,” said Walters. “So if I'm looking confused, they might say, ‘I have a recipe right here for you.’”

Retailers adapt to meet demand for household supplies
May 19, 2020