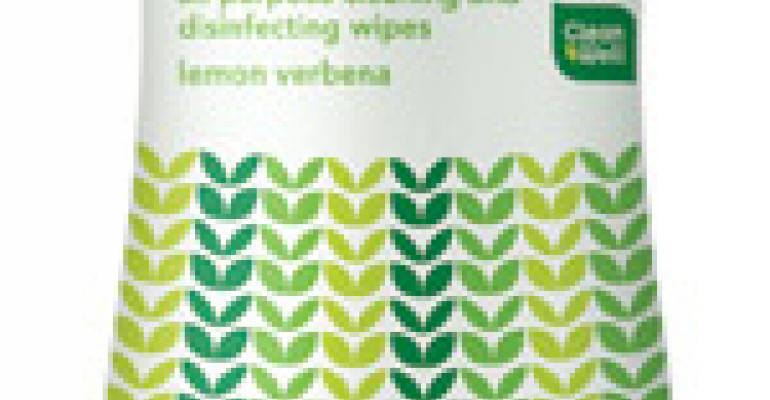 They are all-pervasive as a part of our household and personal care routines. Retail sales of wipes have been robust across many product categories and demand is expected to pick up with a more robust economy.

Real growth, however, is expected to come in wipes that have a halo effect in their positioning as healthy, eco-friendly products. Retailers and manufacturers are heeding the public's environmental concerns for products that are good for the earth yet effective as well.

Consider this about wipes.

While those moisture-filled towelettes represent a small percentage of the overall household paper products market — about 10% of combined sales in mass retail outlets of toilet paper, napkins, paper towels and disposable towelettes — the wipe segment is the fastest growing with sales up 54.1% over the last five years, according to a 2010 report from Mintel International, a research company.

Moist towelettes alone, including baby wipes, but not household, personal care or specialty wipes, sold 233 million units or $769 million at food, drug and mass merchandiser channels for the 52-weeks ending Dec. 26, 2010, according to SymphonyIRI Group, Chicago, which does not track sales from Wal-Mart Stores, club stores or fuel/convenience stores.

Consumers' obsession with cleanliness, health and convenience has given rise to the rapid growth of household and personal care cleaning wipes that have grown ubiquitously across many product categories, including digital electronics.

Mintel interestingly pointed out all non-white ethnic groups were more likely than whites to report using moist towelettes instead of tissues.

Disposable wipe usage, however, is widespread among the general population, according to a consumer cleaning survey by the American Cleaning Institute, formerly the Soap and Detergent Association.

The ACI's 2008 cleaning survey that polled consumers on wipe usage revealed that 71% of just over 1,000 consumers surveyed reported using cleaning, disinfecting or antibacterial wipes. That was up from 66% during a 2004 survey.

“Cleaning wipes have become part of the American fabric, so to speak,” said Brian Sansoni, a spokesman for the ACI.

As such, these throwaway products raise environmental concerns.

To put it in perspective, about 20 billion square feet of nonwoven substrate, the material used to make wipes, are produced in the United States each year, according to one manufacturer source. Much of that material is made of polyethylene or polyesters — synthetic plastics that are not biodegradable. That translates into plastic sitting in garbage dumps.

“If someone were to load all of the disposable wipes purchased by consumers in North America last year [2008] onto 18-wheel semis, the caravan would number 9,000 trucks and stretch for 68 miles. And it would be carrying 83,000 tons of these seemingly ephemeral cloths — which are anything but fleeting,” according to a well-publicized media quote attributed to Karen Klages, a Chicago Tribune reporter.

The accuracy of the above statistic is not clear, but the Freedonia Group, Cleveland, a research organization that studies the wipe sector, claims disposable wipes contribute just 0.1% to the nation's landfills, which includes baby wipes, industrial wipes and home-use wipes, both pre-moistened and dry.

“These wipes are safe for disposal in consumer trash, as U.S. landfills are well-engineered and permitted facilities, designed to deal with a variety of chemicals, metals and other materials. They are not considered a hazardous waste,” the U.S. Environmental Protection Agency told SN.

Municipalities report such products can wreak havoc on sewers, septic and waste-water treatment systems. Then there is the issue of water contamination concerns in the products' life cycle.

In its most recent report, which forecast a 4.3% annual growth of both consumer and industrial wipes to total $2.3 billion by 2014, The Freedonia Group said: “Since wipes are generally disposable after a minimal number of uses they are also impacted by environmental concerns about the consequences of the disposability. When their useful life is over, wipes often end up in a landfill, or are flushed or burned. As a result, longer life, biodegradability and recyclability of their nonwoven materials are likely to become more important issues over time as the consumer wipes market expands.”

In a report run for SN on new products in the wipe sector, Tom Vierhile, director, Product Launch Analytics, Canandaigua, N.Y., said, “It appears that the smaller brands are most likely to be talking about being biodegradable, which is the top green claim for wipes. Larger brands really aren't pushing this yet.”

He added that manufacturers are not talking about the construction of the wipes themselves. “This suggests there may be an opportunity to talk about just how the wipes are made and from what materials they are using.” For example, those using biodegradable bamboo material may be worth playing up as an innovation, Vierhile suggested.

Sansoni of the ACI said the challenge for manufacturers is to balance product effectiveness and quality with biodegradability.

“You don't want to make a product were the consumer has to use more than one wipe. That's not environmentally friendly,” he said.

“It will be R&D and innovation in coming years that will allow this category to be more environmentally friendly. The category will continue to be popular because these products do get rid of a lot of dirt, germs and you can dispose of them easily.”

Drummond Lawson, director of sustainability for Method — the San Francisco-based supplier that first began selling its eco-friendly line at Molly Stone's Markets and then landed on Target shelves before expanding to big food retailers like Whole Foods, Kroger and Wegmans — said the manufacturer has seven SKUs of wipes it markets with retails that range from $3.99 for its all-purpose wipes to $5.49 for its specialty wipes for granite, stainless steel, leather and wood surfaces. Method also sells a flushable bathroom wipe and last year came out with a thyme-based antibacterial wipe that kills 99.9% of household bacteria.

Except for the antibacterial wipe, Method's wipes are recognized with the EPA's Design for the Environment (DfE) label for meeting stringent criteria for human and environmental health. It means that the wipes are compatible with compost systems, said Lawson. The EPA does not give an environmental certification to antibacterial products, he added.

“We acknowledge the demand for convenience cleaning wipes. But there has to be a better environmental benefit designed into the materials as well. For us that means finding renewable cellulose-based nonwoven substrates such as wood fiber or bamboo that are biodegradable.”

Wipes made of cellulose substrate can still have 1%-2% polyethylene and still pass the biodegradable test even though they may leave a fraction of poly in the compost pile, he said.

In selling Method at retail, Lawson said the biggest hurdle was to get consumers to understand the brand, see the product and try it. He said repeat sales were strong after trial and that is where Method's growth continues to come from.

Lawson acknowledged that in some cases price points tend to be higher on eco-friendly products. For the antibac wipe, which retails for $2.99-$3.99 for a 35-count canister, the botanical ingredients are more costly to formulate than a bleach-based wipe.

Retailers have rolled out their own natural cleaner lines such as Safeway with Bright Green, Publix with GreenWise and Wal-Mart with GreenLine in Canada.

Among moist towelettes sold last year, private label represented about 34% of the baby wipe segment and a quarter of moist towelette sales, according to SymphonyIRI Group's latest figures.

Last year Wal-Mart brought in Seventh Generation's wipes as part of its move to embrace sustainability, and vowed to vigorously promote the products and educate consumers on their benefits.