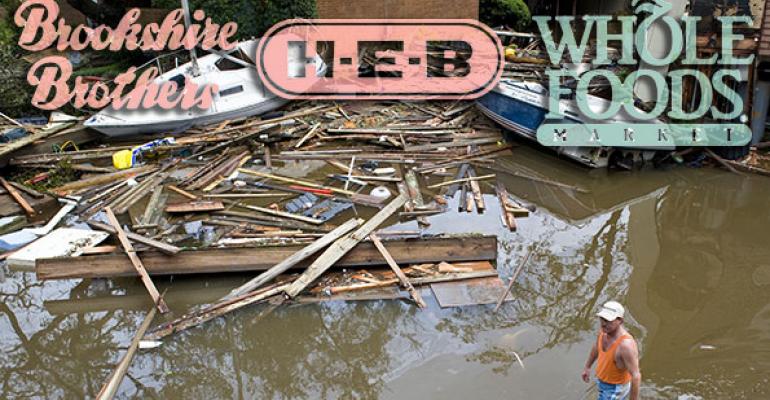 H-E-B also handed out hot meals in San Marcos via its Mobile Kitchen, and provided the American Red Cross with hot meals for its delivery service.

Whole Foods announced it would provide $1 million in zero-interest loans to businesses in the Shoal Creek flood area. In 1981, the retailer’s original store was damaged by flooding.

"Whole Foods Market understands the tragedy of floods. And we also understand the power and positive impact of love in business,” John Mackey, Whole Foods’ co-founder and co-CEO, said in a press release. “We ONLY survived in 1981 because of the outpouring of love and support from local businesses, customers, neighbors, supplier partners and dedicated team members. Now, 34 years and 419 stores later, we are able to return the favor to Austin and pay it forward to help the current generation of local businesses hurt by recent flooding."

The retailer said stores in Austin would collect monetary donations at checkout to benefit the American Red Cross of Central Texas.

In Austin and Houston, customers of Texas-based Safeway banner Randalls can make donations at checkout to benefit the American Red Cross Central Texas and Texas Gulf Coast chapters. Since Tuesday, the campaigns have raised $11,000. Randalls said it would match contributions up to $100,000.

On Thursday, Walmart and the Walmart Foundation announced a donation of $500,000 to local disaster relief organizations in the form of cash, food, water, cleaning supplies, baby and personal care products. The retailer said it gave out 75,000 bottles of water earlier in the week to affected residents in San Marcos and Henderson, as well as cleaning products, diapers, work gloves and other supplies to support flood relief efforts and supply shelters in Houston, Wimberley and San Marcos.

The Walmart Foundation pledged an additional $80,000 to the American Red Cross earlier this month.

”We are committed to helping families throughout Texas and Oklahoma impacted by the flooding this week. Because those affected include our own store associates and customers, many associates in these communities immediately jumped into action to help others when the flooding began,” Dan Bartlett, SVP of corporate affairs for Walmart, said in a press release. “Having been raised in Texas, my thoughts and prayers are with the local communities, our customers and our associates."

This article has been updated to include information about Randalls and Walmart.