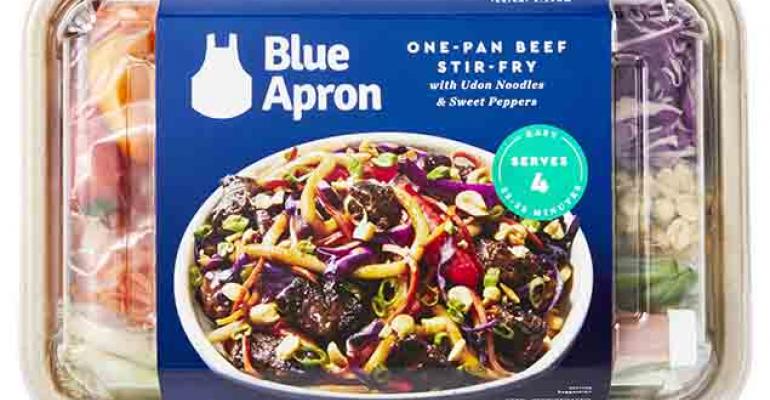 The test kicked off April 28 at 15 Costco warehouse clubs in the Pacific Northwest and three in the San Francisco Bay area.

Initial recipes for the pilot include One Pan Beef Stir Fry and Southwestern Chicken Tacos. Meals are priced at $24.99 and serve four people, and selections will be rotated every three to four weeks. Costco currently is the only retailer carrying those two meal kits, a Blue Apron spokeswoman said.

Blue Apron announced the pilot with Costco on Thursday in reporting 2018 first-quarter results. The company has worked with Costco on a gift card program since the fall of 2016.

“For now, it’s a test. We have it in limited locations, in the Bay Area and the Northwest,” Nelson said in an interview. “We’re carrying a couple of SKUs that are unique to us. The cost per serving is about $6 — $6.25 — so it’s a high value.

He added, “It’s is a nice brand that people recognize, and we’ll see how it sells.”

Dickerson noted in the conference call that the meal kit pilot with Costco will expose the Blue Apron to new groups of consumers.

“In the months ahead, we will continue to launch new partnerships with different products and price points to further broaden our geographic reach, introduce the Blue Apron brand to new consumer segments and expand our total addressable market,” Dickerson said. “In our view, we have only scratched the surface of how the Blue Apron Meal experience can engage with consumers.”

The recipes being sold at Costco were created in tandem with the retailer, according to Tim Smith, senior vice president and general manager of consumer products at Blue Apron.

“We have aligned on a couple of recipes that everybody is excited about,” Smith said in the call, “and we see a continued opportunity to continue to refine with them to ensure that we are meeting needs of the customers Costco has in their current membership base.

“We do think that product will be slightly different, given the needs of our customer in-store relative to our direct model,” he explained, adding that Costco “brought a lot to the table” in working with Blue Apron to develop the in-store offering. “So we are pleased about Costco as an initial partner and moving into an on-demand space.”

Blue Apron also won’t be the only meal kit brand in the Costco stores, according to Dickerson. “Costco already does have other meal kits in some of their stores. So there wouldn't be an expectation for exclusivity from our perspective right now in our pilot,” he said. “If we perform, things will just take care of themselves. We actually are excited about going up against competition in-store relative to the strength of our brand, the strength of our culinary team, and the strength of our operations and logistics to get the product from our customer centers to the locations. So I'm really excited about the opportunity to show up on the retail floor.”

In another move to boost awareness of its brand, Blue Apron in the next several weeks plans to launch a series of “experiential brand activations” in cities nationwide that show strong growth potential, Dickerson told analysts.

“This initiative will include a short-term retail pop-up location in New York City. Our goal of these activations is to create physical experiences where we can celebrate our customers, giving them the opportunity to interact with our brands and explore new products including our on-demand offerings,” he said. “I look forward to the insights gained from these brand-building activations as we pursue strategic initiatives that elevate the Blue Apron experience to consumers.”

For the first quarter ended March, Blue Apron saw sales decline 20% year over year to $196.7 million. The company noted, however, that revenue grew 5% quarter to quarter, which it attributed to stepped-up marketing efforts and advanced product merchandising capabilities. The customer order count and number of customers fell versus a year ago but showed growth since the end of 2017, as did orders per customer and average revenue per customer.