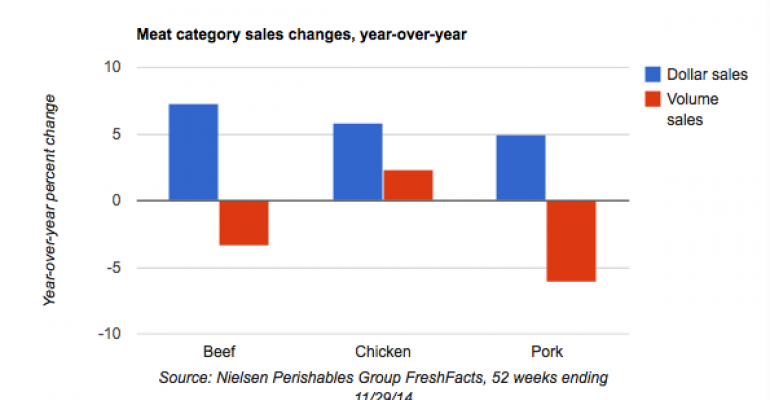 Although some retailers have reported strong pork sales, overall the category has not fared as well as other proteins in the past year, according to data from Nielsen Perishables Group.

The high price of beef may have meant that supermarkets sold a lot less of it, but it also drove up dollar sales in a big way. In contrast, the drop in pork volume sales was greater than the rise in dollar sales. Chicken benefited from the increased prices of beef and pork with dollar and volume sales gains.

Among the pork subcategories, consumers bought a lot less of some of the most popular cuts, such as shoulder butt, picnic shoulder and loin. As they have done with beef, many consumers switched to ground pork, one of the few subcategories to gain both dollar and volume sales. While “other pork” — which includes items like stew meat and cube steak — saw a big jump in dollar and volume sales, it accounts for a small percentage of total category sales.

However, pork's fortunes are primed for a huge turnaround in 2015. According to the latest forecast from USDA, pork production will total 23.9 billion pounds this year, an increase of 4.6% over 2014 and an all-time high.