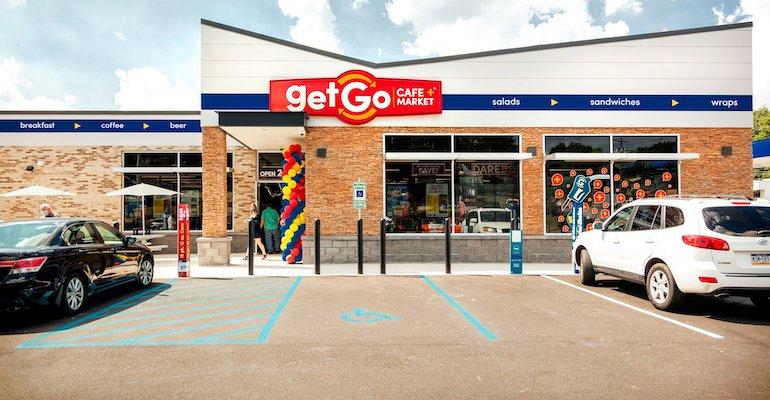 GetGo
Convenience/fuel stores are serving up a widening array of prepared foods and specialty beverages to on-the-go consumers, who see these outlets as on par with quick-serve restaurants, Bluedot's survey found.
Issues & Trends>Consumer Trends

Convenience stores get customers’ attention when it comes to food

Convenience stores are winning over U.S. consumers looking for their next fast-food meal, according to new research from Bluedot.

Bluedot’s wide-ranging Convenience Experience Report finds that American consumers are putting c-stores on par with quick-serve restaurants (QSRs). Nearly six in 10 consumers consider purchasing a meal from a convenience store when stopping for fast food, and one in three consumers do in fact visit c-stores for fast food.

Among those that do enter the store, 27% buy grab-and-go refrigerated food, 25% hot food such as hot dogs and pizza, and 21% made-to-order items like custom sandwiches. Also, 61% of consumers report they would visit a c-store more often if mobile ordering, drive-thru and curbside pickup were available. 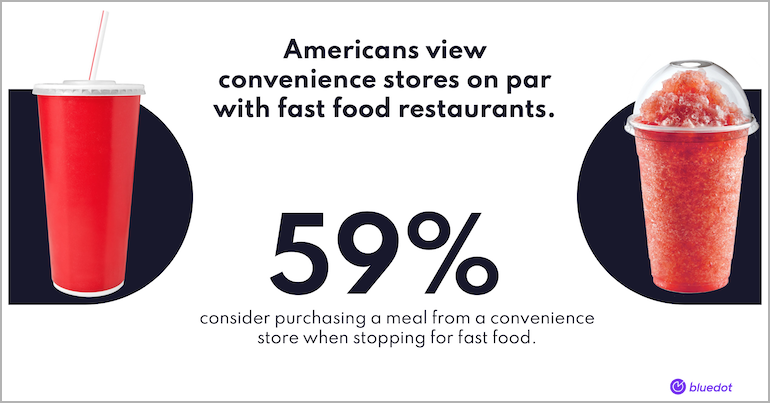 “The data supports what industry leaders have been saying for some time: C-stores are now competing head-to-head with QSRs. Clearly, the investments c-store brands have been making into foodservice initiatives are paying off,” according to Emil Davityan, Bluedot co-founder and CEO. “The data also strongly signals that there’s an opportunity for gas and c-store brands to do much more with loyalty programs and mobile strategies to boost retention, especially if discounts are determining consumer preferences and habits. It’s another page out of the restaurant industry’s playbook that could really level the playing field.”

The report reveals how c-stores and gas stations are losing customers to short lines. Nearly half of those surveyed say they will walk out of a c-store if one or two people are in line at the register, and one-third will drive away if there’s just one car ahead of them at the pump. C-store brands might keep customers in stores longer by adding EV charging stations — the report found that most EV owners (74%) want to charge next to convenience stores.

Nearly nine in 10 consumers say price is the deciding factor as to where they get their gasoline, and discounts ranked as the top reason why consumers would use c-store and gas station apps. However, the study shows a major gap between consumers who join loyalty programs for gas discounts (74%) and loyalty members who actually receive discounted gas (44%). 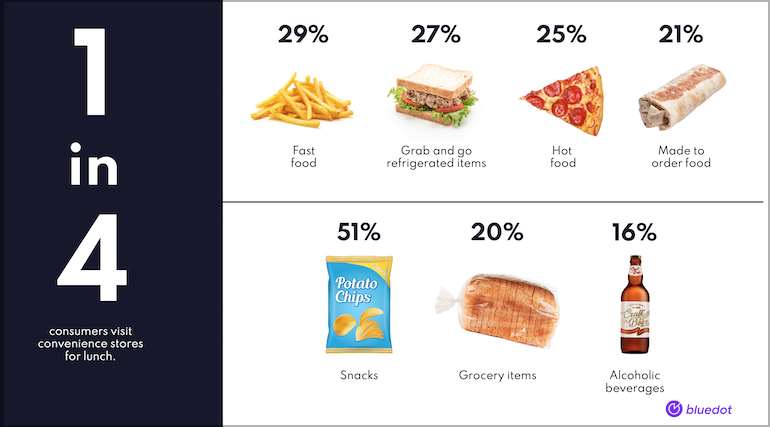 Other report highlights regarding convenience customers included the following:

• 70% enter the convenience store when they’re pumping gas. Of those, 77% enter sometimes while 23% enter every time. 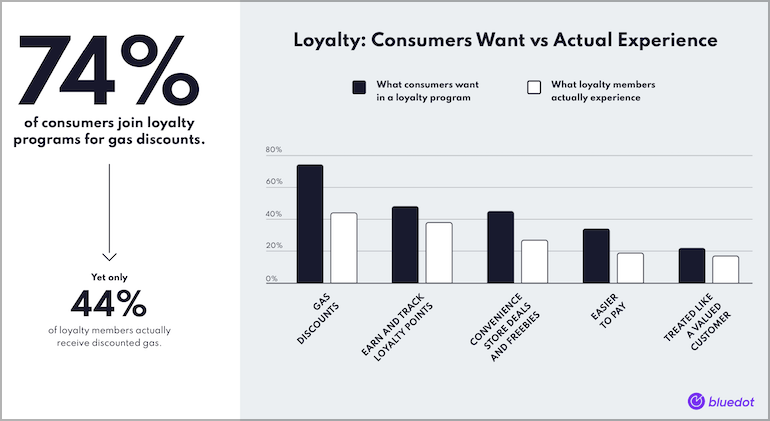 And at the pump, Bluedot’s research revealed these findings:

• Gas loyalty members said their experience includes gas discounts (44%), ability to see how many loyalty points they have (38%), convenience store deals and freebies (27%), easy payment (19%) and thanked for being a loyalty member (17%).

• Consumers would become a loyalty member if they were offered gas discounts (74%), didn’t have to open a credit card (58%), ability to see how many loyalty points are available (48%), c-store deals and freebies (45%) and easy payment (34%).

• Nearly half of consumers (48%) are not willing to pay more than another 5 cents per gallon for gas if it means earning loyalty points, while 25% favor loyalty points over price.

• Most consumers prefer not to insert their credit card when paying at the pump; 83% are concerned with credit card fraud. As a result, 38% examine the card reader, 34% would prefer to store the payment in the gas station's mobile app, 28% use one-tap payments with their credit card, and 23% use Apple Pay, Google Pay or Samsung Pay.

• On digital screens, consumers want to see c-store deals (37%), loyalty points and levels (37%), news and entertainment (30%), featured food items in the store (27%) and the ability to use secure payment already stored in the gas station’s mobile app (25%).