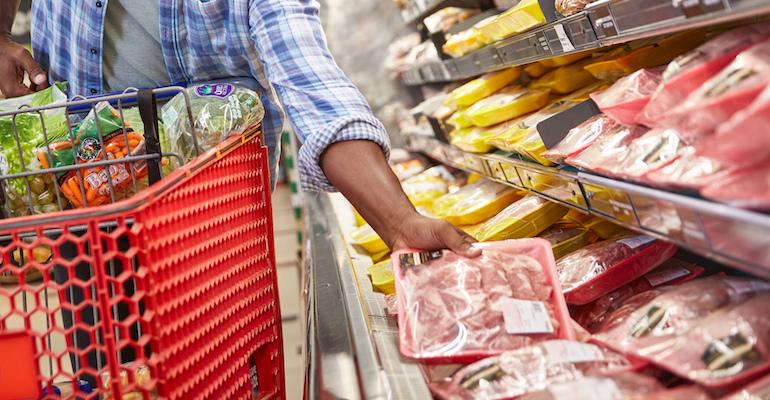 Save A Lot
Total sales for perishables climbed 6.8% in June, yet 59% of consumers are seeing fewer of the items they want on sale, the International Dairy Deli Bakery Association reported, citing IRI research.
Issues & Trends>Consumer Trends

For grocery shoppers lately, the case has been no different in fresh foods than other store departments: Prices are high.

In its June marketplace report, the International Dairy Deli Bakery Association (IDDBA) cited an IRI survey finding that 96% of primary shoppers say they are paying somewhat or a lot more for groceries than they did last year. Respondents, too, listed examples of increased pricing across nearly every store department.

Related: Sales at grocery stores edge up again in June

“A number of deli, dairy and bakery categories are among the most frequently mentioned items when shoppers reflect on inflation,” Jonna Parker, team lead for fresh at IRI, said in the IDDBA report. “Bakery and dairy have a very high trip frequency, making consumers ultra-aware of the price increases.”

Customers are hunting for savings in fresh foods but not always finding it. IDDBA’s June report said, according to IRI research, 59% of consumers are seeing fewer of the items they want on sale, and 43% said items aren’t discounted as much as they used to be. About half of shoppers, 51%, are stocking up on certain items more than usual, 18% out of fear they won’t be available next time and 26% out of concern that prices may rise further.

“All this points to great power of relevant, targeted promotions if supply chain conditions allow for it,” explained Heather Prach, director of education for IDDBA. “It could be a cross-promotion, happy-hour sale, one-day or three-day promotion, but try to keep relevant promotions front and center to retain a greater share of primary shoppers instead of them cherry-picking competitors’ deals and losing a vital part of the total store basket.”

IRI’s monthly research revealed that 93% of all grocery customers are concerned about inflation, the highest percentage yet in its survey. Eighty-one percent of shoppers said they changed what and where they made purchases in June, up from 50% in fall 2021. Those changes include seeking sales specials (54%), skipping non-essentials (45%), finding coupons (33%), and buying more private or other low-cost brands (29%). And even amid high gas prices, 17% of respondents said they cherry-pick specials across retailers, and 16% now do some grocery shopping at lower-cost retailers.

“While consumer options for money-saving options when buying groceries are plentiful, it is important to note that it is not a ‘race to the bottom’ to the cheapest choice nor a complete abandoning of restaurant visits,” Parker noted. “However, the 40-year high inflation does mean consumers are much more strategic about their grocery and restaurant trips.”