Overall, fresh foods thrived during the past 12 months. A full 81% of respondents say that sales in perimeter categories increased during that time, no doubt much of that tied to the early grocery sales boom in March and April of last year.

For those retailers whose sales have increased, two-thirds reported increases ranging from 1% to 15%, with the largest number (18%) saying sales have risen from 10% to 12%.

Looking forward, nearly half of retailers surveyed say they expect sales in perimeter categories to increase in the next 12 months.

Of retailers expecting to see sales increases in fresh categories in the next 12 months, 42% expect those increases to be in the 4% to 6% range.

Of those retailers who expect to see perimeter sales decrease in the next 12 months, nearly one-third anticipate drops in the 4% to 6% range.

Sixty percent of retailers say they plan to change their perimeter assortment in the next 12 months. Many retailers say they will focus on grab-and-go, ready-to-heat/eat and other convenient packaged fresh meal options; new products; and new flavors and ingredients in prepared foods.

During the past year, retailers reported sales margins improved or stayed steady in every category except one — floral, which saw improvement for only 26% of retailers compared to staying steady for 51% and decreasing for 23%. Meat/seafood and produce sales margins improved the most at 66% and 65%, respectively, with dairy (52%) and prepared foods (51%) both improved for more than half of the respondents.

Big-box retailers (including Walmart) are overwhelmingly the biggest competitor to grocers’ fresh food departments, noted by 45% of respondents. Online retailers are a distant second (13%), perhaps because so many retailers now offer their own online programs.

Price was cited as the leading advantage of competitors by 50% of supermarket retailers, with selection (38%) and convenience (30%) ranking second and third.

In the prepared foods category, this past year there was new competition — COVID-spurred cooking from home, which 43% of retailers cited as the biggest challenge to prepared foods. Another 20% said fast casual restaurants (e.g., Chipotle) and 11% quick-service restaurants.

While nearly half of retailers (46%) said that convenience was the biggest advantage that competitors had over supermarkets’ prepared food programs, this year a new response was also cited by 26% of respondents — COVID safety measures.

To fight the competition for prepared foods sales, retailers are turning to grab-and-go (65%), promotions and specials (46%) and home delivery/click-and-collect (37%).

Grab-and-go cases and deli counters are prevalent in most supermarkets that offer prepared food now, at 87% and 78%, respectively.

Of those retailers planning to add any prepared food offerings or services in the next 12 months, grab-and-go cases are the top response, with 31%. Fast casual stations (21%), self-service bars (19%) and the deli counter (18%) will also be making a comeback for some retailers.

Most retailers are keeping the same amount of space for fresh foods, although some categories have seen more space allotted — namely produce and meat — while floral is the only category seeing a notable loss of space.

Retailers are fairly evenly split on whether any increase in space for fresh will come at the expense of center store space.

More than two-thirds of retailers said any changes they made to the perishables department in the past 12 months were COVID-related.

Fresh departments are still considered the main draw of the supermarket, despite the growth of center store and frozen over the past year. When it comes to signature departments, produce (38%), meat (29%) and deli/prepared foods (24%) lead the pack with retailers.

When asked their greatest fear for the perimeter, attracting/training qualified employees was the top issue for 31% of retailer respondents. “Due to the enhanced unemployment benefits early on in the pandemic, it was hard to hire qualified staff,” one retailer noted. “Getting help and keeping help has been a challenge due to the wages being paid by other jobs,” another voiced.

The growth of online grocery now extends to fresh departments, long thought to be challenged by the lack of “sensory experience.” More than two-thirds of retailers now offer online ordering and curbside pickup (67%) and online ordering and delivery (65%) for fresh foods.

When asked “What is most important to your shoppers in the perimeter?,” qualilty/freshness was overwhelmingly the top response from retailers at 62%. Convenience (10%) and cost (9%) were a distant second and third, with organic/natural and sustainability/sourcing both singled out by 4% of respondents. 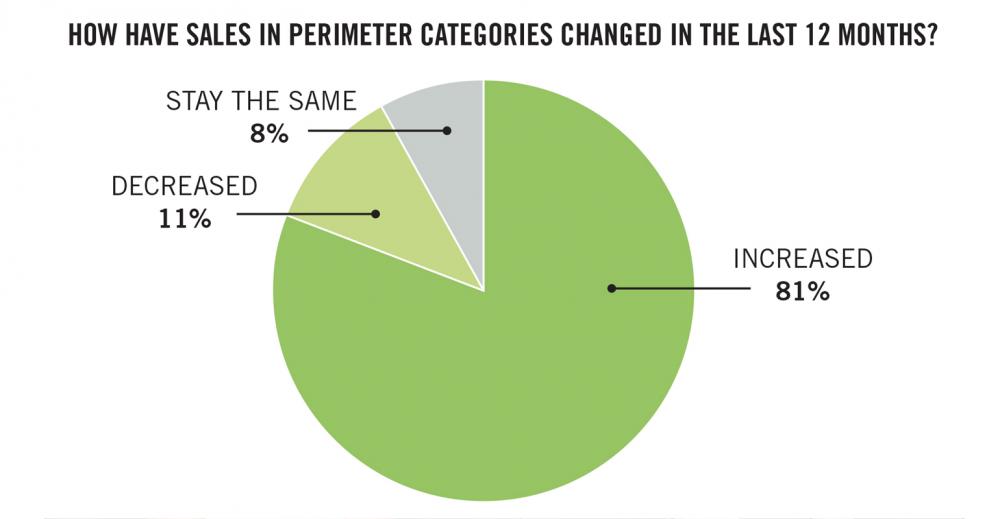 Next Up
Organic produce sales up, units down in Q3
Start Slideshow ›