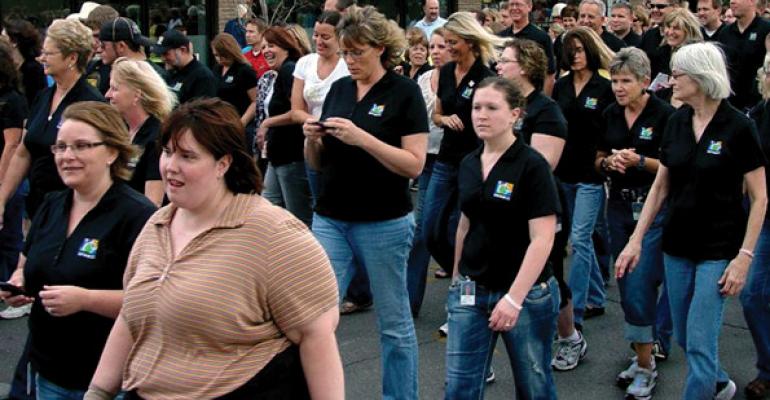 Having recently lost 50 pounds, Iowa Grocery Industry Association President Jerry Fleagle knows firsthand the benefits of comprehensive lifestyle change. So when he was asked to rally Iowa’s supermarket chains and independent operators to help transform the state into the healthiest in the nation by 2016, there was no hesitation. “It didn’t take but a nanosecond to decide to get involved,” Fleagle told SN. 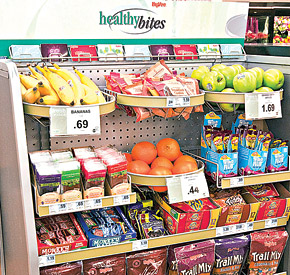 Hy-Vee is adding fresh produce and healthy snacks to checkstands.

In the months since, Fleagle has convinced retailers of all sizes to lend support to the Healthiest State Initiative — a privately led, publicly endorsed campaign that encourages individuals, businesses, organizations and communities to work together to improve Iowans’ overall health and well-being as measured by the Gallup-Healthways Well-Being Index. The scale takes into account physical and emotional health, healthy behaviors, work environment and basic access to things like health insurance, safe places to exercise and affordable fruits and vegetables. But the plan isn’t just about feeling good.

“Addressing public health in Iowa also means addressing the economic well-being of our state,” said Gov. Terry Brandstad at an Iowa Board of Health meeting, according to The Des Moines Register.

In fact, statewide health improvements could allow Iowa to redirect $16 billion to economic development over the next five years, according to the World Economic Forum. Even maintaining 2009 obesity rates could save the state as much as $1.6 billion by 2018, according to the “F as in Fat” report by Trust for America’s Health and the Robert Wood Johnson Foundation.

Boding well for the effort is the support of Ric Jurgens, chief executive officer of Hy-Vee Food Stores, who is spearheading the Healthiest State Initiative with business leaders from Wellmark Blue Cross and Blue Shield of Iowa, the Iowa Sports Foundation and insurance brokerage Holmes Murphy & Associates. Jurgens is so passionate about the plan he’s committed to stay involved even after his retirement from Hy-Vee on June 1.

Given the lower health care costs, higher productivity and increased economic viability projected to result from the Healthiest State Initiative, getting involved has been a no-brainer for IGIA’s food retailing members. It’s the subsequent steps that require a bit of thinking.

Although the IGIA is working to develop guidelines for promoting healthy foods in ads, retailers aren’t handed a cookie-cutter approach to enhancing quality of life within their respective towns. Rather, they’re asked to pioneer inventive ways to do-it-themselves.

“This is not a top down program, but one that we wanted to develop from the grass roots within the community. The best ideas always percolate from the store level,” said Fleagle.

Buy in from independent retailers is helping bring the Healthiest State Initiative to smaller cities and towns.

Foodland Supermarket, an independent in Missouri Valley, decided to incent participation in the 1-kilometer Start Somewhere Walk — the October kickoff to the Healthiest State Initiative — with $1 off a healthy food purchase. Food retailers donated bottled water and healthy snacks to the 2,300 group walks that drew 291,000 Iowans — enough to set a world record.

Many of the individual walks were organized by so-called Blue Zones ambassadors — store directors and other representatives from Hy-Vee and Fareway Stores, responsible for mobilizing their communities. In the future, ambassadors will coordinate stops made by the Healthiest State wellness tour bus Hy-Vee plans to put on the road.

“We reach out through these ambassadors on a fairly regular basis to keep them in the loop with the things we have going on,” said Helen Eddy, assistant vice president for health and wellness at Hy-Vee.

A centerpiece of the Healthiest State Initiative is the Blue Zones Project, a well-being movement based on the findings of author and researcher Dan Buettner who’s studied the places in the world where inhabitants live the longest, healthiest lives.

Ten Iowa communities will be transformed into Blue Zones as part of a collaboration of Wellmark who will underwrite the effort with $25 million over five years, and Healthways, a well-being improvement organization focused on physical, social and emotional health.

The project will apply Blue Zones principles with the assistance of national experts to add things like nutritious menus to restaurants, bike lanes to main thoroughfares and ways to add purpose to residents’ lives.

Although Blue Zones projects are privately funded, public capital may come into play. Experts will analyze communities and give each a list of possible interventions. If a community chooses to make their streets more walkable, for instance, the city will foot the bill.

In the Blue Zones

Eighty-four towns and cities across Iowa submitted statements of interest to become Blue Zones communities, and 58 made it through to the second round. Of those making it through, 40 have a Hy-Vee store — mainly since the chain’s store directors have rallied local groups and residents.

“They’re very active on the Chamber of Commerce and involved in Rotary Clubs, so they brought [Blue Zones Project] to their attention and help fire up their communities,” noted Eddy.

The ability to assemble citizens is among the Blue Zones Project selection criteria, as is buy in from businesses interested in transforming the health of employees, noted Calhoun. “The success of the transformation will absolutely be predicated on community involvement,” she said.

Hy-Vee will lend its dietitians to Blue Zones transformations by having them teach residents how to turn their kitchens into Blue Zones. This can be achieved with small steps like removing TVs from eating environments and portioning snacks like pretzels into small bags to avoid overeating.

Towns not selected as demonstration sites may still become Blue Zones. Healthways will open a Blue Zones Learning Institute this summer to educate business and community leaders how to make the transformation.

Hy-Vee also plans to bring lessons learned in Blue Zones operating areas to all Iowans. “Our goal is to make all of Iowa a Blue Zone,” said Eddy.

Hy-Vee has experience in this area. As part of a separate project, the chain’s Albert Lea, Minn., store got involved with the AARP/Blue Zones Vitality Project by replacing sugary snacks with soy nuts, apples, oranges and other foods consumed in Blue Zones, in a single checkout aisle.

The collective health of Iowans is not dissimilar to that of a yo-yo dieter.

Ranked No. 7 in the nation for physical, social, emotional health and other measures gauged by the 2009 Gallup-Healthways Well-Being Index, it slipped to No. 19 in 2010, and finished a respectable ninth midyear 2011.

The Hawkeye State may be be doing better than average, but it isn’t exactly the picture of health with two in three Iowans tipping the scales as overweight or obese.

“If you look at the measurements of well-being in Iowa they’re pretty high in some areas, but others, such as work environment and healthy behaviors, are in one of the lower quantiles. A healthier workforce with higher well-being has lower medical costs and lower absenteeism.”

Iowa hopes to take the top spot on a scale that gauges physical and emotional health, healthy behaviors, work environment and basic access to things like health insurance, safe places to exercise and affordable fruits and vegetables. The biggest competition comes from the following states: