STATE COLLEGE, Pa. — A research project quantifying shopper behavior in supermarkets using video cameras to track customer movements has begun to illustrate how shoppers act with regard to certain categories in the stores.

Preliminary data from the research, which is being conducted by VideoMining Corp. here, show the performance of certain product categories relative to Center Store overall by measuring share of traffic, shopper engagement within the category — measured by the customer stopping — and sales relative to traffic and engagement.

For example, the preliminary data show that while beer indexed even higher than carbonated beverages for exposure (188 vs. 131, respectively), carbonated beverages performed better on exposure unit response (499 vs. 337). Both categories did well on engagement response, implying that once customers stop, they are likely to buy, according to Tom Sullivan, president of VideoMining.

On the other hand, both soup and laundry under-indexed for exposure, but performed better than average on exposure response. However, soup under-indexed in dollar response to engagement, implying that it did not generate enough sales per category shopper, Sullivan explained. 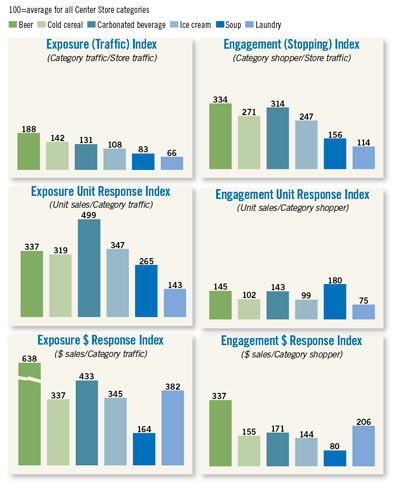