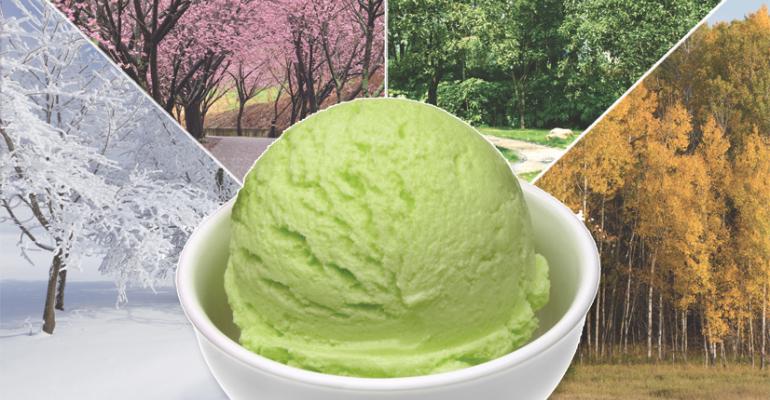 Ice Cream: A Dessert for All Seasons

A cold, creamy ice cream cone is welcome relief on a hot day. And while summer is the category’s highest consumption period, seasonal flavors, new packaging and other innovations help position the frozen dessert as a year-round staple.

Seasonal products like Turkey Hill’s Egg Nog and Breyers’ Apple Cinnamon are some of the fun, and occasionally unusual, flavors. Since they are made in small batches, they only last for a limited time.

The majority of IDFA’s members are involved in limited runs to some degree, according to Armstrong.

Along with creating excitement, limited editions offer a way for companies to introduce new flavors without fully committing to them.

“They can try it out and see what kind of feedback they get,” Armstrong said.

For the holidays this year, there are products like Dreyer’s/Edy’s Slow Churned Peppermint Ice Cream, packed with peppermint candy pieces. 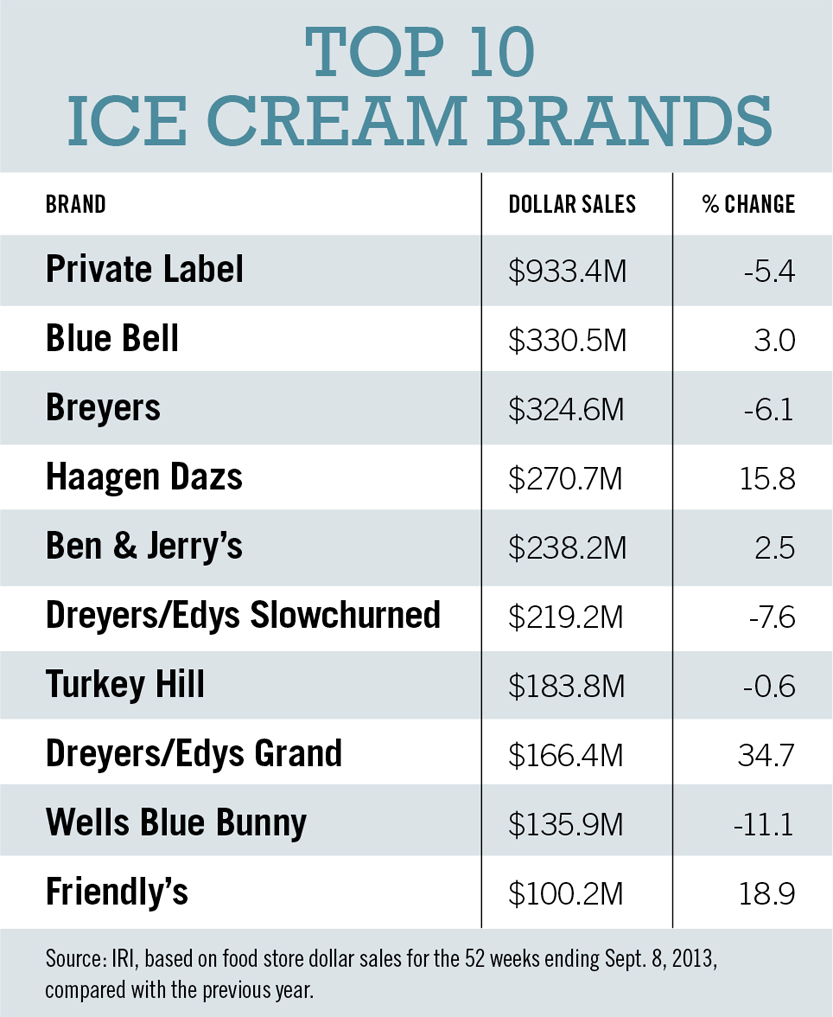 The company started releasing limited batches a few years ago as an answer to consumer requests. Every year, it releases about four to five new full-time pint flavors.

“What we were finding was that fans were looking to us for new flavors year-round. So limited batches were a way to bring more new flavors to fans,” said Ben & Jerry’s spokeswoman Liz Stewart.

Ben & Jerry’s limited batches generally stay on shelves for about three to four months. When one completely sells out, the next one appears.

By the end of 2013, Unilever will have offered seven limited-edition ice cream frozen novelty varieties — two from Breyers and five from Good Humor. Among them: Breyers Strawberry Shortcake, vanilla ice cream with a strawberry swirl and cake pieces, available in March.

And for the fall and winter months, it just introduced Breyers Apple Cinnamon Crumble, which features apple flavor with an apple cinnamon swirl and pie crust pieces.

By offering desserts in shapes tied to specific holidays, Unilever gives customers a fun, new way to enjoy their favorite treats while celebrating the seasons.

Similar to offerings in other snacking categories, limited-edition flavors help to drive impulse purchases, according to Unilever.

The company’s limited-edition Breyers and Good Humor varieties are seasonal offerings and are usually available between two to four months, unless they are tied to a specific holiday, like Easter or Halloween.

Private labels are equally as involved in the limited-edition trend. Weis Markets, Sunbury, Pa., for instance, ran a contest last spring to let a consumer create its next private-label ice cream flavor.

Under the Facebook promo, contestants could enter their submissions by “liking” the Weis Facebook page and completing an entry form. Weis’ Facebook fans voted on their favorite through March 8. The winning flavor: Chocolate Covered Strawberry Ice Cream.

And H-E-B and the Houston Texans football team partnered to co-brand a new private-label ice cream under H-E-B’s “Creamy Creations” premium ice cream brand. Called “Texans Tackle Crackle,” it is made vanilla ice cream and laced with creamy chocolate swirl and candy crunch. The ice cream will be available at all Houston-area H-E-Bs throughout this football season.

Another way marketers are generating excitement is by incorporating well-known cookie and candy brands into ice cream.

Breyers does just that with Breyers Blasts! The brand combines Breyers ice cream with popular cookie and candy brands, like Snickers, Reese’s and Oreo.

Breyers Blasts was named one of IRI’s 2012 New Product Pacesetters, which are top-selling brands, by generating $147.3 million in year-one sales, according to IRI.

Ice cream marketers are also capitalizing on the popularity of Greek yogurt. About 50% of IDFA members said they are seeing increased demand for frozen yogurt, according to the IDFA survey.

Turkey Hill Dairy added to its limited-edition ice cream flavors by introducing its first Greek frozen yogurt with baklava. The limited edition flavor contains vanilla Greek frozen yogurt with crunchy baklava pieces and a honey cinnamon swirl. Along with new flavors and ingredients, packaging innovations are helping to extend ice cream beyond the peak season. Single-serve Edy’s and Häagen-Dazs market single-serve cups that retail for about $1.50 each. The Häagen-Dazs cups are 3.6 ounces; Edy’s, 5.8 ounces. They each contain about 250 calories. Each comes in a variety of flavors. The Häagen-Dazs cups even come with a spoon.

MONTVALE, N.J. — Along with seasonal ice creams, another type of frozen dessert is generating consumer excitement at A&P.

It’s called “The Smoogy.” Sold exclusively at A&P and its stores, the “Smoogy” is the first creation from the reality show “Supermarket Superstar” to launch at A&P.

The “Smoogy,” a cookie sandwich with frozen chocolate-fudge or lemon cheesecake filling, is available in the frozen food section for $3.99 for a 4-ounce box.

The treat is the brainchild of Tekisha Collins, an Indianapolis resident who lost her corporate job due to downsizing and entered the competition in hopes of turning a family recipe into a business.

“Supermarket Superstar Season 1 Winner” is printed on the front of the package.

The Lifetime cable network show features a competition between home cooks to get their products into production as a brand to be launched in A&P stores. Tom Dahlen, a buyer for A&P, and Sam Martin, A&P’s chief executive officer, are judges.

The winner also gets a $10,000 prize and $100,000 worth of product development from Dine Marketing and Mattson. Other judges include celebrity chef Michael Chiarello; Debbi Fields of Mrs. Fields Cookies; and branding expert Chris Cornyn of Dine Marketing.

The top three flavors are vanilla, chocolate and butter pecan, respectively, with coffee, Neapolitan and Rocky Road tied for fourth place, according to the survey, based on responses by IICA member companies, which make and distribute an estimated 85% of the ice cream and frozen dessert products consumed in the United States.