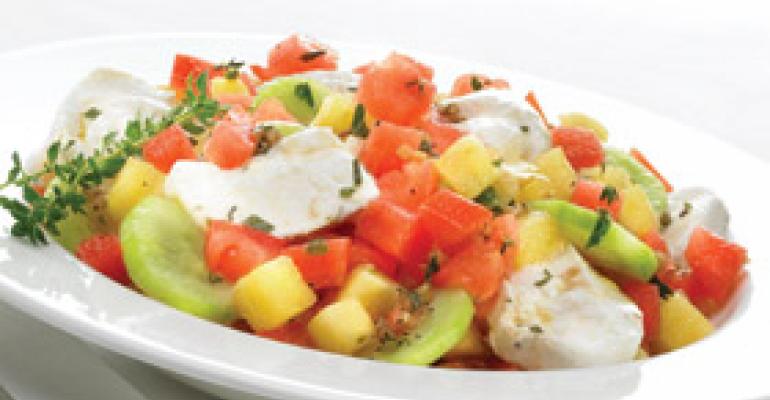 AUSTIN, Texas — As the weather turns warmer this summer, retailers will be offering customers plenty of fresh summer cheeses that pair well with summer produce and grilled dishes.

“For us in Texas, it starts getting really hot, and spring into summer is really a lot of fresh goat milk cheeses,” said Kelly Sheehan, shop manager at Antonelli's Cheese Shop here.

Sheehan, who is also an official conference cheesemonger for the American Cheese Society's conference and competition this summer in Montréal, said goat cheeses are fun and versatile because they can be put in salads, eaten with bread, grilled with, or put on hamburgers.

David Mader, cheese specialist at Dorothy Lane Market based in Dayton, Ohio, said that cooking cheeses, such as Halloumi sheep's milk cheese and Juustoleipa cheese are also good for this time of year, since they hold their form when grilled or sautéed.

“These are cheeses which are nice at this time of the year because people are starting to think about grilling outside,” said Mader. “These are cheeses which you can throw on the grill like you would other things that you're cooking, whether they're meats or vegetables. People are grilling a lot of things now besides just the traditional hot dogs and hamburgers and chops.”

Both Mader and Sheehan also mentioned blue cheese as a good addition to summer dishes such as burgers, chops or salads.

And, Sheehan said summer is also a perfect time for fresh mozzarella with tomatoes.

In fact, many retailers noted that fresh mozzarella, an adaptable ingredient for salads, continues to grow in popularity each year.

Of the mozzarella varieties Marsh offers, Farrar said the BelGioioso branded ‘unwrap and roll’ cheese is very popular. Customers can unroll the cheese and fill it with fresh basil, thinly sliced tomatoes and a vinaigrette, roll it and slice it for a quick appetizer.

“For us the mozzarella category, the fresh category, is the driver for summer time. We do a lot of promotional activity all summer long.”

“It's a huge category for us. And we cross-merchandise it, it's in produce, it's in dairy,” said Boyle.

And, retailers could do even more to cross-merchandise summer cheeses, or hand out recipe cards to give people simple recipe ideas, suggested Marilyn Wilkinson, director of national product communications at the Wisconsin Milk Marketing Board.

“Feta and watermelon salads are quite popular in restaurants during the summer, and those kinds of things usually filter down into home kitchens when they're easy enough,” said Wilkinson.

Wilkinson said the availability and variety of specialty cheeses have continued to grow. Customers are becoming more familiar with fresh cheeses such as queso blanco, queso fresco and feta, which is one of the fastest growing specialty cheeses produced in Wisconsin.

The retailer's Greyhound Pass location in Westfield, Ind., will kick off the summer with a return to cutting specialty cheeses and wrapping them in-store. Cheeses such as Jarlsberg, French bries, and mango ginger Stilton will be available in different sizes.

“The nice thing with that is, when you cut and wrap, you can let them taste anything they want. It gives you more one-on-one contact with the customer,” said Farrar.

Dairy case catering to those who miss daily treats
Sep 30, 2020