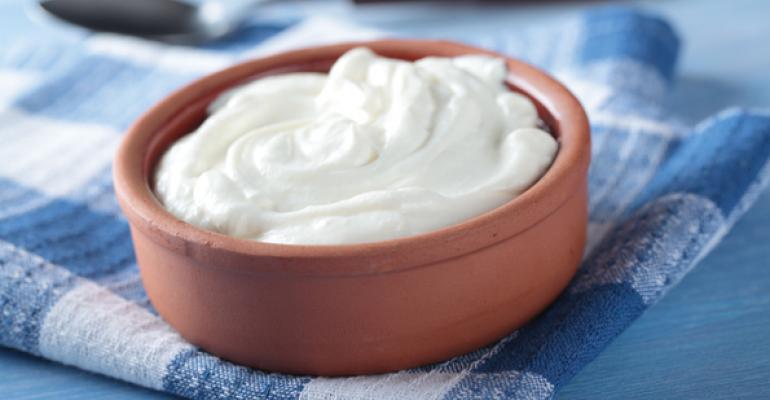 Yogurt: It’s All Greek to Them

At Brigido’s Fresh Market in Slatersville, R.I., dairy and frozen food manager Peter Augustyn has noticed the dairy case looks a bit different than it did a few years ago: The yogurt section is now split almost half and half between Greek products and more traditional varieties.

Other retailers similarly have seen a jump in Greek yogurt sales as consumers make the switch from traditional varieties and suppliers adjust their product lines to meet the growing demand.

Gaining steam over the past couple of years, Greek yogurt is now achieving widespread popularity in diverse markets.

“We got in the Greek yogurt business probably a year ago to a year and a half ago,” said Doug Pitt, category manager at Associated Food Stores, Salt Lake City. “And since then it’s grown to about 25% of my business.”

“It’s probably the fastest growing item that I’ve seen in the yogurt category,” he added. 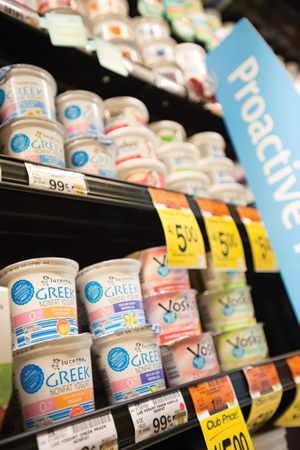 These retailers’ observations match explosive growth in the sector. Whereas Greek yogurt represented 3% of the market three years ago and 16% last year, it now accounts for 33% of total yogurt sales, according to a report by UBS Investment Research, New York.

The booming popularity of Greek yogurt is one of the driving forces in a sales surge across the category in recent years. Overall yogurt sales increased steadily from $4.88 billion in 2007 to $6.4 billion in 2011, according to data from Chicago research firms Mintel and SymphonyIRI Group.

“I think yogurt’s in a good place because it’s perceived as healthy and people are looking for things that are healthy,” said Mintel analyst John N. Frank. “It’s also in a good space because people are snacking more, eating on the go more, and it’s portable.”

A survey conducted by Mintel found that consumers are now eating yogurt at breakfast, lunch and dinner and as a snack, which has helped increase sales.

“And people seem to like the taste,” said Frank.

Greek yogurt in particular fits in with all of these positive qualities. Barely on the radar for the general population just a few years ago, this richer, creamier version has gained a following thanks to its health benefits — double the protein of traditional yogurt and generally low-fat or fat-free — and unique flavors.

Respondents to a Mintel survey ranked taste as the No. 1 factor in why they purchase Greek yogurt, followed by the perception that it’s healthier than regular yogurt and the fact that it’s high in protein.

Similar analysis from UBS and the NPD Group, Chicago, found people are 76% more likely to replace a meal with Greek yogurt than with a traditional variety.

“It’s sort of a little bit indulgent without going totally off the wagon,” she said.

According to UBS, the most popular Greek yogurt brand remains Chobani, which now accounts for 53% of Greek yogurt sales, but Dannon’s Oikos label and smaller brands like Hain Celestial’s Greek Gods are gaining ground.

“Five years ago if I said the word Chobani, you wouldn’t have had a clue what it was,” Jon Wendel, executive vice president, supply chain and marketing at Hy-Vee, West Des Moines, Iowa, told SN in an earlier interview. “Now we sell as much Chobani as we do Yoplait or Dannon — major name players.”

Associated Food Stores recently found Chobani to be so popular it was unable to place more orders to restock its stores and so offered other brands instead.

“The shelves are empty on Chobani and so people are moving over into the Oikos,” said Pitt.

With Greek yogurt’s popularity continuously on the rise, UBS predicts traditional yogurt sales will suffer, a trend that is already taking place at some supermarkets.

“As Greeks are growing, I notice that some of the regular product lines are slowly fading away,” said Augustyn of Brigido’s. “Flavors are not coming in as much. All the new stuff, it’s mainly Greek or something different.”

The rise of Greek yogurt has been matched by an influx of new products in the marketplace. All of the major brands now produce Greek yogurt varieties, and new brands, flavors and types of products continuously make their way to supermarket shelves.

According to Mintel’s new product database, there were 130 new Greek yogurt products introduced in the U.S. in the first half of 2012. The third quarter has seen an additional 59 new products so far.

“It’s not slowing down,” said Frank. “There’s going to be a lot more Greek yogurt.”

And not all of those products will be the refrigerated containers that are now so prevalent. There are some frozen Greek yogurts already on the market and Frank expects more to debut in the coming year, followed by other products that fall farther from the dairy case.

“I would assume that other food categories will want to get in on the Greek yogurt party and will try to find ways to co-brand with popular Greek yogurts,” said Frank. He suggested salad dressings and baked goods made with Greek yogurt as two possible examples.

UBS also sees potential for Greek yogurt products specifically geared toward children, a segment of the population that currently accounts for the consumption of 35% of traditional but only 10% of Greek yogurt.

While Greek yogurt may be the buzz-worthy food item of the moment, it’s not likely to push other products out of the market completely. Just because consumers aren’t gushing over traditional yogurts the way they do over Greek varieties, “that doesn’t mean they don’t still have it in their refrigerators,” said Demeritt of Hartman Group.

Although sales of traditional yogurt are down 20% at Associated Food Stores, customers retain loyalty to certain types.

“Of course Yoplait is always popular,” said Pitt. “I mean, that’s probably half of my sales still.”

The high price of Greek yogurts — about 90% more expensive than traditional varieties, according to UBS, though the cost is falling — also is likely to keep some consumers from making the switch for the time being.

Brigido’s Fresh Market regularly offers discounts for different brands — for example, a Dannon sale one week, Chobani the next — which ultimately may be the biggest factor for most customers when making a yogurt purchase, Augustyn said.

“There are some that still buy the Greek yogurt regardless of the price, because it is more expensive,” said Augustyn. However, he added, “Most customers are out there buying whatever’s on sale.”

Frozen yogurt shops may be a dime a dozen, but two brands are betting on consumer interest in dairy treats of the non-frozen variety. Dannon and Chobani opened standalone restaurants in New York City this summer offering artisanal-style, made-to-order yogurt concoctions topped with fresh ingredients.

Dannon’s Yogurt Culture Company set up shop in Midtown Manhattan, with an emphasis on traditional and Greek yogurts served with fruit, nut and syrup toppings.

“It’d kind of like if Willy Wonka had a yogurt bar, this is what it would be like,” said Dannon spokesperson Michael Neuwirth. “Without the floating, flying stuff. But it really is. You choose it however you imagine it and that elicits a terrific positive reaction from guests.” 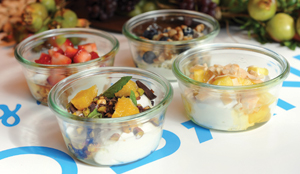 So far, about 80% of customers have opted for Greek over traditional yogurt, Neuwirth said. Yogurt prices are $5.49 for cups and smoothie drinks and $5.99 for parfaits. The Yogurt Culture Company gets its traditional yogurt from a Dannon manufacturer in Westchester, N.Y., while the Greek yogurt comes from a contractor in Shroudsburg, Pa.

“We’ve been basically jam-packed busy every day since we opened,” said Dar Vasseghi, Chobani’s director of retail concepts. “It’s almost like every other customer stops and says, ‘Oh my God, Chobani has a store.’”

Cups come in two sizes, small and large, which cost $3.75 and $4.75, respectively. The store sources all of its yogurt from Chobani’s plant in central New York.

Photo by Diane Bondareff/Invision for Chobani.