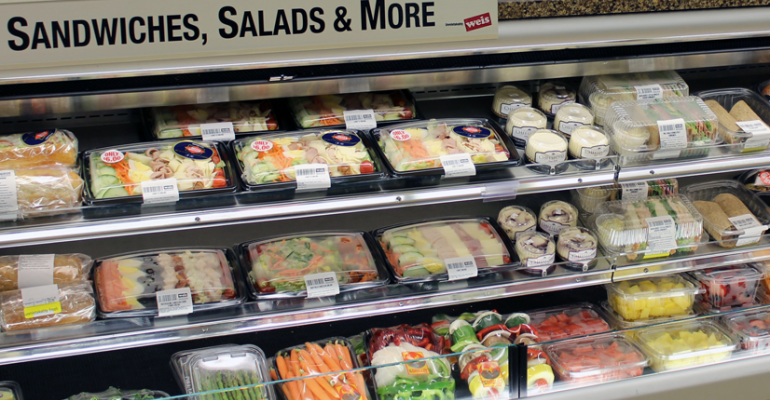 SUNBURY, Pa. — Keeping comfort food as its hallmark, Weis Markets recently has pushed the development of its foodservice program to new heights.

Once limited to pizza and fried and rotisserie chicken, the chain’s prepared foods now include a new bistro sandwich program; plated meals; leafy green salads; house-made pizza; an expanded rotisserie chicken program; and, in one new location, a self-service buffet.

“Our foodservice program has been evolving for nearly 20 years, and in the past four, we’ve expanded it, and improved its overall quality,” Geoffrey Wexler, the 165-unit chain’s director of deli and prepared foods, told SN.

“Whenever we’ve built new stores or remodeled existing units over the past two decades, we’ve devoted more space to foodservice or improved our ability to offer it.” 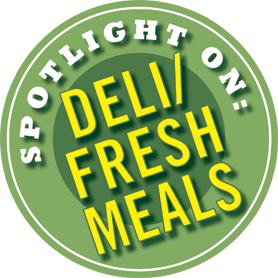 New stores dedicate more space for prepared foods, and in some existing stores, the traditional deli has been consolidated, allowing 15% to 20% more space for foodservice items, Wexler said. A little more than half of foodservice menu items are prepared in-store. Others are sourced from a commissary that turns out food made to Weis’ specifications — such as the popular bacon and mushroom meatloaf.

Several of Weis Markets’ new concepts have had their debut quite recently.

Leading up to individual meals launch, the department’s attention had been focused on improving the quality of the chain’s store-made pizza.

A bistro sandwich  program introduced chainwide this month features piled-high, shaved deli meats on bread, accompanied by condiments with a proprietary twist. A side of potato or macaroni salad is packed with the new sandwiches, and the retail is $4.99.

Improved, leafy green salads with a protein, also retailing for $5 or $6, and featured in the self-service case, have shown the quickest sales growth. 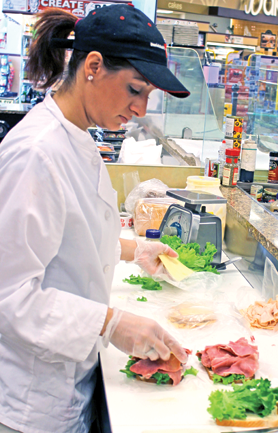 “That category has  really blown up. We’ve had overwhelming customer response,” Wexler said.

“With everything, we’ve concentrated on freshness and variety and quality to make us as attractive as a restaurant.”

As a result, Weis Markets’ foodservice sales have grown steadily, even following 2008, when the faltering economy compromised sales for many.

Actually, Wexler attributes some of the sales growth after 2008 to the fact that people were not eating in restaurants as often.

Some stores even added seating.

Even though the service deli daily dishes up some chilled favorites like stuffed shells, chicken pot pie, eggplant rollatini, and store-made deli salads, more than 90% of sales are from self-service cases.

A run of 24 feet of chilled, grab & go items, in most stores, located near the service deli, displays personal meals in at least 10 varieties, leafy green salads, some topped with grilled chicken, store-made pizzas, and overstuffed deli sandwiches.

“We’ve found that while customers do want food made or assembled in-store because it shows freshness, they want to buy those items ready to go,” Wexler said. “More and more our customers prefer ready-to-go, rather than full service.”

Weis’ successful rotisserie chicken program illustrates that well. With improvements added earlier this year, that category is going strong, and it gives Weis an edge over its competitors, Wexler said.

“We re-invented our rotisserie program. We got a new supplier that provides us with larger, more consistent chickens, and we’ve added unique flavors,” some of which are exclusive to Weis, such as Memphis barbecue, Wexler explained.

“Memphis barbecue is not like off-the-shelf barbecue sauce. It’s vinegary but has a little bit of sweetness. It adds another layer of flavor, a complexity, that makes it different.”

While the chicken flavors and the pizza toppings introduced in February get kudos across the chain, some products are tailored to particular regions.

“We have stores in five states, and 30 zones of  regionality,” Wexler pointed out. “For instance, in central Pennsylvania, potato salad and macaroni salad are sweeter. That’s the regional taste, but near Philadelphia, potato salad is more like New York’s.”

In one of Weis’ newest stores — opened in March, in Baltimore, Md. — the retailer added a hot, self-service buffet. It sits right in front of the deli service counter, where associates can easily replenish and maintain product. There, Weis is trying out theme nights such as Italian night with corresponding dishes.

“That is our first hot bar, and it’s an experiment,” Wexler said, pointing out that it’s too early to evaluate its success.

Next up will be hot sides such as mashed sweet potatoes and creamed spinach merchandised alongside rotisserie chicken, fried chicken, roasted pork loin, and battered haddock, all of which are prepared in-store.

“The growth of our program mirrors the changes we continue to see in our customers’ busy lives.”

Wexler sees opportunity spreading out well into the future. The demand is there, and Weis is catching up, he said.

“Even with all the changes and improvements we’ve made, I think we’re just seeing the tip of the  iceberg.”