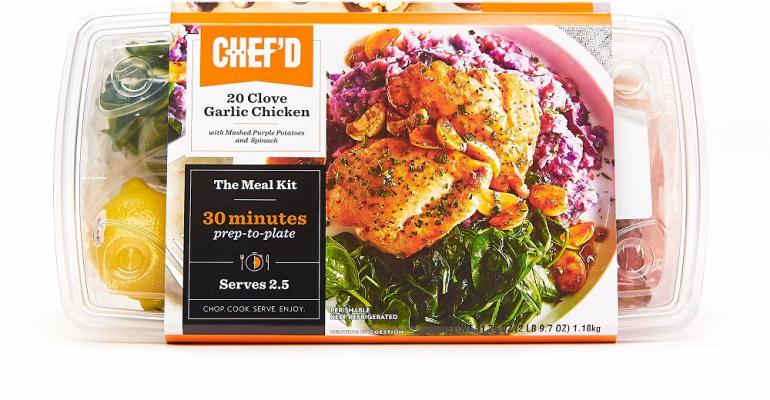 The Los Angeles-based company, in tandem with retail distribution partner Smithfield Foods, has rolled out a selection of three meal kits to 30 Walgreens and Duane Reade stores in the metropolitan New York area.

In the pilot program, the Chef’d meal kits are displayed in open refrigerated cases for on-the-go pickup at Walgreens and Duane Reade locations in the New York boroughs of Manhattan (22 stores), Brooklyn (four stores) and Queens (one store), as well as at one store each in Yonkers, N.Y.; Jersey City, N.J.; and Hoboken, N.J. The Walgreens and Duane Reade chains are part of Walgreens Boots Alliance Inc., the largest U.S. drugstore operator. “Retailers are fully aware that consumers desire the convenience of meal kits,” Rick Stein, vice president, fresh foods at the Food Marketing Institute, told SN. “They will continue to develop their own meal kit initiatives or develop partnerships as fast as possible to meet the growing demand.

A spokeswoman for Chef’d said the company believes it’s the first meal kit provider to have retail distribution at drugstores.

“Since its launch as the only nonsubscription meal kit company, Chef’d has been dedicated to providing customers with more quality meal kit offerings in more locations,” Chief Executive Officer Kyle Ransford said in a statement. “Through our expansion into New York-area Walgreens stores in partnership with Smithfield Foods, we are able to extend meal kits to new audiences and occasions.”

Priced at $15.99 apiece, the meal kits serve two or more people. Each kit contains ready-to-cook, pre-portioned ingredients, including fresh herbs, leafy greens, and USDA Choice proteins. Chef’d said its kits have total preparation-to-plate times of 10 to 30 minutes and a one- or two-pan cleanup.

Chef’d, which launched in 2015, serves up thousands of meal kit recipes for next-day delivery via its core online service. The company entered the retail arena in early May with the distribution of meal kits to more than a dozen grocery retailers in 27 states, including Costco, Harris Teeter, Tops Markets, Hy-Vee, Weis Markets and Gelson’s Markets.

Drugstores mark a new retail opportunity for the burgeoning meal kit sector, where companies have focused their retail efforts largely on supermarkets.

Albertsons Cos. and merger partner Rite Aid Corp. are upbeat about the possibilities for meal kits at drug stores. In an investor presentation last month, company executives said meal kits from Plated — acquired by Albertsons in September 2017 — could be sold at Rite Aid stores, and future Plated offerings could include diet-specific meal kits for pharmacy or clinic patients with chronic health conditions. Albertsons has said it plans to have Plated meal kits in more than 650 of its grocery stores by the end of fiscal 2018.