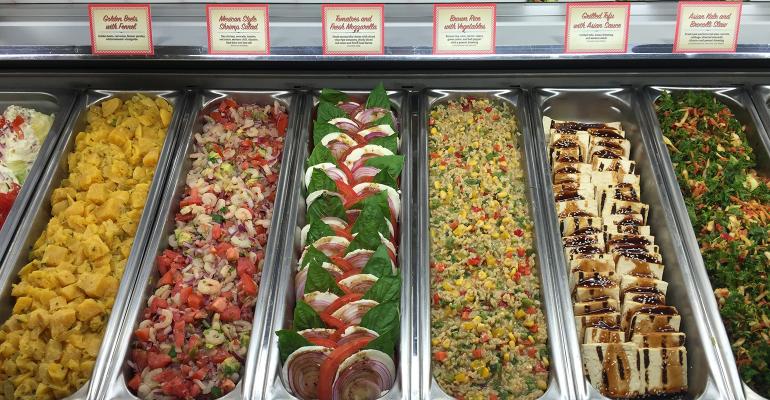 From an initial test in a handful of stores in late 2015, expanded deli offerings have now been installed in 55 stores — 32 existing locations and 23 new stores — executives said during a recent call with investors.

“These enhancements continue to be well received by our customers and enhance our position as a ready-to-eat destination,” said Sprouts CEO Amin Maredia.

Analysts and industry observers that SN spoke to said Sprouts’ foray into deli was a logical step for a retailer that built its name on great produce that could compete on price with other natural retailers and conventional supermarkets.

“We continue to see a number of different chains expand their prepared foods area. I mean the margins are certainly very nice there compared to some of the center of the aisle. And there are more and more consumers that are putting supermarket prepared foods area, deli areas in their consideration for lunch and dinner,” said Brian Darr, managing director of Chicago-based research firm Datassential.

“So it makes complete sense, and especially given kind of the demographics of their shopper. They tend to have that little bit more affluent shopper, similar to other types of stores like that that are that fresher format.”

Experts agreed the quality of prepared food items at Sprouts was likely to be high, given existing standards for fresh departments.

“And they’re primed to do it [expand the deli], because they have all the best ingredients. They already have great produce. They have great meats,” said Marcia Schurer, president and founder of Chicago-based retail consulting firm Culinary Connections.

Similarly, Jacobowitz said Sprouts was “starting at a fairly high level” in terms of product quality.

He added Sprouts’ deli offerings would likely have “a cleaner ingredient standard than your typical traditional, conventional supermarket would have in its deli.”

“That is not to say that organic drives the prepared foods menu. I think it does not, and Whole Foods has said as much. But natural likely does drive it.”

Due to the size of many of its existing stores, Sprouts has said it will not be able to add the new deli offerings to all locations.

“The newer stores are a little bit larger to accommodate a more built out and prominent deli, and the retrofitting into the older stores that have larger footprints that can accommodate it, so they’re not robbing Peter to pay Paul, taking away too much in the smaller boxes,” said Jacobowitz.

Sprouts’ President and COO Jim Nielsen said 30,000 square feet was the “sweet spot” for stores going forward, which is slightly bigger than a traditional location. The larger footprint allows for an expanded deli as well as additional SKUs in grocery, alongside the produce and organic items the retailer is know for, he said. It’s also “a very operational efficient box for our team members.”

For the deli initiative, Sprouts’ first priority probably is to keep current customers from shopping elsewhere, said Jacobowitz, while “the bonus is we’ll broaden our appeal to another echelon of customers.”

Executives said they are happy with initial reactions from shoppers.

“And we are seeing great feedback from customers and while it's early, we're extremely pleased with the performance and the loyalty build that's coming out of those investments,” said Brad Lukow, the retailer’s CFO and treasurer.

However, Schurer was surprised there wasn’t more of a push to inform customers about the deli upgrades, at least in the digital space. She noted Sprouts’ website and social media have very limited information on deli.

“In this day and age, that’s not sufficient in marketing and selling. It may work, but you’re certainly not going to build and grow your business that way, or get new customers to come in, or try you out if you’re not helping to see it and explain it.”

Though Sprouts’ new deli offering is strong, competitors probably shouldn’t be too worried yet, experts said.

“I don’t think this creates an existential threat for any competitors,” said Jacobowitz, noting that Sprouts’ signature remains “high quality produce priced competitively with all players.”

“Bolstering the deli behind that is just filling in any gaps,” he said. “It was probably a shortcoming of the model. It was a necessary tradeoff in the smaller boxes.”

Sprouts executives said it was a little too soon to tell how the deli upgrades have impacted the bottom line. Nielsen said the retailer’s deli and private label initiatives could give sales a boost in the upcoming fourth quarter.

The industry will certainly be watching.

“I think the numbers will kind of tell, since they’re a publicly traded company,” said Darr, “and we want to certainly keep an eye on their financials to kind of see how these are performing.”