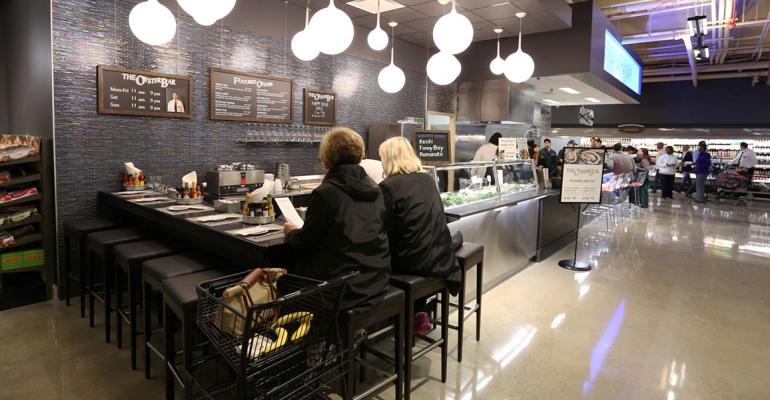 <p>More supermarkets are adding amenities like seating, such as at this oyster bar in a Mariano&#39;s store. (Photo courtesy of Mariano&#39;s)</p>
Product Categories>Deli

As supermarket prepared food departments have become more robust, they have added more trained staff and extra amenities while decreasing the number of offerings, according to the results of a new FMI study.

Conducted in partnership with Technomic, “The Sophistication of Supermarket Fresh Prepared Foods” surveyed retail executives from 28 banners representing over 8,000 stores. FMI and Technomic detailed the top results of the study in an industry webinar on Thursday.

One find from the survey was the proliferation of trained chefs. Nearly 90% of banners now employ a corporate executive chef, respondents said. In addition, 60% of banners employ chefs in at least some of their stores, such as high performing stores, high traffic stores or newly redesigned stores.

“Acclaimed chefs are moving in record numbers from the traditional foodservice side, the restaurant side of the business, over to the retail side,” said Wade Hanson, principal, Technomic.

Supermarkets are also attracting people from the business side of restaurants and foodservice.

“And ultimately what that’s doing is helping far more banners today achieve some level of profitability than what we’ve seen in the past,” said Hanson.

At the store level, supermarkets have also upped the amenities in prepared foods departments. For example, 96% of supermarket banners are offering in-store seating in at least some of their stores.

“This suggests heavy investment into the seating areas. It’s the direction that supermarkets are looking to go. And that seating is not an afterthought. You can think of it as Panera-like, fast casual-like,” said Hanson.

Additionally, 89% of banners offer beer and wine tasting in at least some store, 86% provide free Wi-Fi, and 72% include a beer or wine bar, among other amenities.

“When you have that restaurant quality food, you also need the environment to go along with that. Consumers will push back if that environment’s not there,” said Hanson.

At the same time, supermarkets overall have cut back on the number of offerings in the prepared foods department as success metrics have become more advanced. More than half of respondents to FMI’s survey said they offer fewer than 50 items in prepared foods.

In the past, many prepared foods departments tried to offer as many items as possible, which led to “pretty significant shrink,” said Hanson.

On a positive note for retailers, cutting back on offerings has not resulted in complaints from customers about lack of variety, because the increasing number of made-to-order stations mean shoppers can customize their orders.

“So they may not have as many choices sitting in front of them, but they have the ability to tweak what is there to their specific likes and dislikes,” said Hanson.

The full study is available for purchase on the FMI website. Additional webinars that take a deeper dive into some of the study’s findings are scheduled for March 16 and May 12.