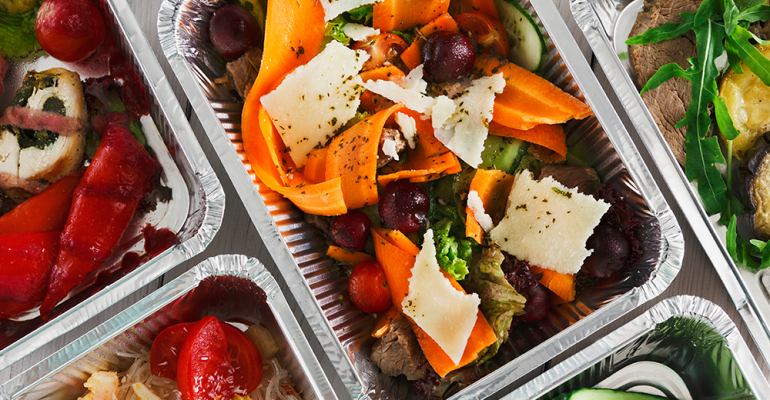 As supermarkets have upgraded their prepared foods programs to become viable competitors to traditional restaurants, they have been slow to marry their ready-to-eat foodservice capabilities with their burgeoning delivery and click-and-collect operations.

Instead, food retailers are investing more effort in promoting partially prepared meals, such as take-and-bake pizzas and cold chicken wings, and other prepared items that are not necessarily for immediate consumption, such as deli salads and premade sandwiches. Some retailers are seeking to expand their foodservice offerings, however.

Grand Rapids, Mich.-based SpartanNash, which offers both click-and-collect and home delivery through its Fast Lane service, has made a limited assortment of hot prepared foods available, including chicken dinners at some locations, but is exploring the opportunity to expand its selection.

“Our selection is currently limited, but this is a work in progress,” said Brian Holt, VP of marketing for the retailer/wholesaler. “Enabling our customers with the ability to customize meals and order from our full prepared-item menu is one of our top priorities. We are looking forward to rolling this out to our customers.” 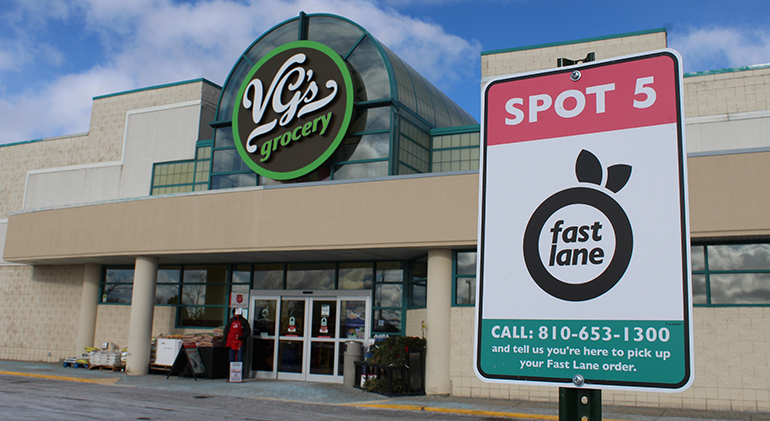 SpartanNash’s Fast Lane pickup has made a limited assortment of hot prepared foods available and is exploring the opportunity to expand its selection.

The company’s plans call for the rollout of configurable deli trays and ready-to-eat meals from the deli, including items from its new Betty Kaye’s Smokehouse barbecue offerings, Holt said. The ability to order customizable, made-to-order desserts such as cakes from the bakery department is also in the works, he said.

Holt said data accuracy in ordering prepared foods online is one of the company’s biggest challenges, especially when it comes to the ability to configure custom orders.

“It is important to make sure our customers are able to order from our menu as if they were in one of our stores,” he said.” This means they should be able choose from a main dish, as well as sides and beverages for dinner from our deli or design a custom cake from our bakery for an upcoming birthday party.”

St. Cloud, Minn.-based Coborn’s, which was one of the pioneers of grocery e-commerce with its Coborn’s Delivers service, also currently makes a limited assortment of its prepared foods available online. It offers some hot prepared foods for store pickup, but not through its warehouse-based Coborn’s Delivers service in the Twin Cities, said Kevin Hurd, a spokesman for the chain. 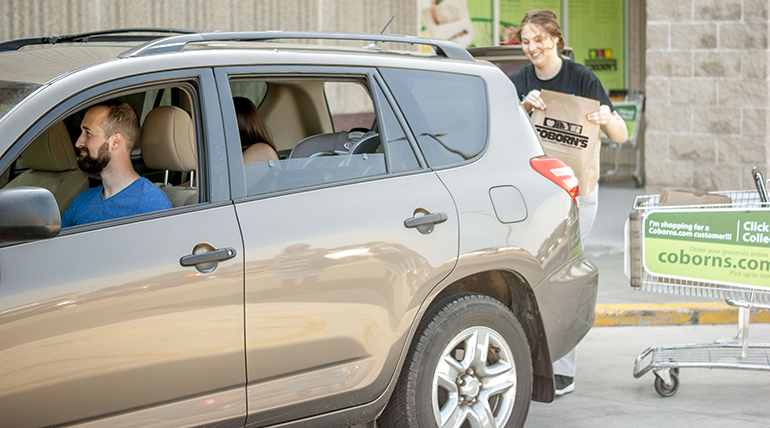 Through its click-and-collect service, Coborn’s offers the ability to order a few hot items at some stores during certain hours.

“It’s not set up for on-demand consumption like a pizza delivery business would be,” he said.

Through its click-and-collect service, Coborn’s does offer the ability to order a few hot items, such as Chester’s Fried Chicken at some stores during certain hours (from noon to 8 p.m., for example).

“We have a little bit more flexibility with the curbside pickup, so we can offer some of those hot prepared foods,” said Hurd.

Among the cold prepared foods available for delivery are deli salads and heat-and-eat pizzas, as well as bakery items such as cupcakes and pies. Such items fit in with the marketing message that supports the delivery service as a time-saver for shoppers, he said, because they eliminate the at-home prep work.

“I think people are still getting used to ordering prepared foods online,” said Hurd. “We do emphasize the grab-and-go type offerings and meal solutions. We want to cater to that guest who doesn’t know what they want to cook for dinner that night, but keeping in mind that there are people who are using this type of service for their regular grocery shopping as well.”

As click-and-collect expands to an increasing number of food retail locations, Bill Bishop, chief architect at consulting firm Brick Meets Click, said there may be opportunities for supermarkets to creatively promote prepared foods at the point of pickup.

“Can you imagine if there was some kind of foodservice promoted right there where they did the pickup for the click-and-collect that made it easy to add that to the order? Then you have an opportunity to increase the average ticket size, and leverage what you have to your advantage,” he said. “I think that would be easier than trying to build it into the routine online ordering.”

“Since people are making decisions about what to have for dinner or what to have for lunch, then someone who is banging away for every meal is probably going to be in a stronger position,” said Bishop.

Supermarkets with strong ready-to-eat prepared-foods programs appear to be in a good position to build that aspect of their business into their online ordering capabilities.

Research from The NPD Group released earlier this year shows that consumers are increasingly creating “blended meals” that include both traditional grocery items and ready-to-eat prepared foods, and the trend is expected to continue to gain traction for the next five years.

“Whether you’re a foodservice operator or a supermarket retailer who has a prepared foods division, what you need to be thinking about is a meal solution approach,” David Portalatin, an NPD analyst told SN.

Food retailers are increasingly working with third-party delivery firms, which train their staff to handle hot prepared foods as necessary, although the bulk of their prepared foods delivery appears to be cold items from the deli.

Instacart, the fast-growing grocery-delivery specialist, works with its supermarket partners to incorporate ready-to-eat and heat-and-eat foods at the retailers’ discretion, according to a spokesperson for the delivery firm. Items are often included in a dedicated “prepared meals” category on the shopping page.

These pages tend to focus on cold prepared foods such as deli salads, premade sandwiches or heat-and-eat entrees, according to an examination of the Instacart ordering sites for several retailers.

Instacart also works closely with its retail partners to determine product placement, promote deals and to adapt the shopping page to reflect their goals. For example, the first several items on the prepared foods page for Wegmans Food Markets recently featured fresh sushi, fresh chicken wings and fresh meatballs, while the first 11 items on a prepared-foods page for Safeway were all Lunchables meal kits, “a likely reaction to the back-to-school rush,” the Instacart spokesperson said. 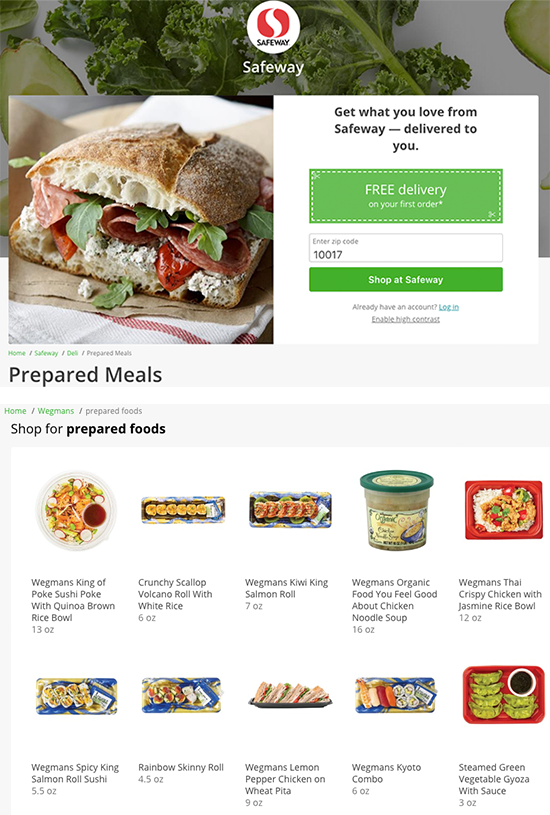 Retailers such as Safeway and Wegmans have partnered with Instacart for grocery delivery that includes prepared foods and meals.

The selection of which offerings to feature and promote online for delivery has become more and more insights-driven, based on data from both the stores themselves and from Instacart, the spokesperson added.

A spokeswoman for Shipt, the delivery service acquired last year by Target Corp., said delivery of hot and cold prepared foods is a part of the services offered, but she declined to disclose any data about sales of ready-to-eat foods.

“Shipt’s primary goal is to provide our members with the household products, fresh produce and mealtime staples they need, when they need them — and that includes prepared foods,” said Julie Coop, the Shipt spokeswoman. “Shipt shoppers are knowledgeable on how to carefully deliver everything from deli sandwiches to sushi to hot-bar chicken tenders.”

To ensure hot and cold items are correctly packed for delivery, Shipt shoppers store these items in separate insulated bags both during the shop and during delivery, she said.