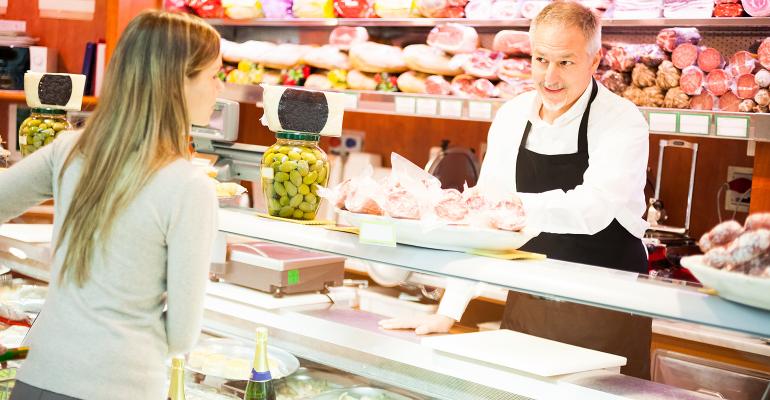 For most food retailers, the recipes have been analyzed, the calories have been counted and the final preparations have been made.

On May 5, when new menu labeling rules are scheduled to take effect nationwide, consumers across the country will be able to see for themselves exactly how many calories are in that fried chicken tender sandwich from their local supermarket deli.

“We are planning on being ready for the deadline,” said Susan Durfee, director of deli and prepared foods at Williamsville, N.Y.-based Tops Friendly Markets. “Certainly it’s great to have that information available for our customers, but it has been very difficult to make sure we have all the information in time for the deadline, which came quickly, even though it seemed like it was a long way away before.”

The requirement that supermarkets operating 20 or more locations post the calorie counts of each of their “restaurant-style” prepared-food offerings was included in the Affordable Care Act of 2010. Food retailers have balked at the new requirements for several reasons, notably that the rules were originally designed for restaurants, which tend to use more consistent recipes and ingredients across their chains.

Durfee said Tops has struggled to resolve some of the details around implementation, but she feels confident that the chain is doing all it can to be in compliance with the law. In fact, Tops’ new menu boards containing calorie counts are being printed this week.

The question she has is: How often will those menu boards need to be updated?

“If I change the bread in our sub rolls next month, and it changes the calorie information, that will be a very big expense to make the correct changes,” said Durfee.

Even the technology Tops uses to generate printed labels containing nutritional information has proven to be a challenge. The company is having to manually adjust some of its scales to support the extra information required for the labels, she explained.

Hundreds of dollars per item

Like many retailers, Tops gathered nutritional information from its vendors, then handed it over to a third party, along with Tops’ recipes, to tabulate the calorie counts.

That process can cost hundreds of dollars per item — one independent retailer was quoted a price of $750 per item, according to the National Grocers Association (NGA) —  and many retailers have 100 or more items that need to be analyzed. Tops Friendly Markets officials "are planning on being ready" for the May 5 deadline. (Photo: Tops)

Melissa Musiker, director, food and nutrition, at consulting firm APCO Worldwide, who has been following the menu labeling issue, said she expects that most large retailers will be ready to comply.

“They may not like it, and there are definitely quirks in the way the regulations are written that make it a bit challenging, but at the end of the day, I think it is just another operating cost, and you have to get past it,” she said.

Retail groups, including the NGA and Food Marketing Institute, are supporting legislation introduced earlier this year known as the Common Sense Nutrition Disclosure Act that would ease some of the burdens of the menu labeling requirements and clarify some of the confusion retailers have.

“This law, as originally passed by Congress, was intended to cover chain restaurants with standard menu items, and while supermarkets are not seeking an exemption, we are seeking clarity and commonsense changes to the regulation so that chain supermarkets and other non-restaurant entities can comply,” said Greg Ferrara, senior VP, government relations and public affairs, NGA.

The measure supported by retailers, H.R. 772/S. 261, was introduced by Reps. Cathy McMorris Rodgers, R-Wash., and Tony Cárdenas, D-Calif., and Sens. Roy Blunt, R-Mo., and Angus King, I-Maine. It is similar to legislation that passed with broad support in the House last year and would provide retailers some relief from certain aspects of the labeling requirements, such as prohibiting private lawsuits for mislabeling items and exempting unique local items sold only at a few stores from mandatory calorie counts.

Posting calorie counts for menu items appears to have so much momentum, however, that even retailers with fewer than 20 stores and thus exempt from the law are adopting the practice.

“We’re not legally bound to do it, but we are going to do it just because it’s a convenience for the customer,” he said. “It will cost our company a little bit of money, but it’s the right thing to do.”

In addition, he said, competitive pressures will likely force his hand anyway.

“If the store across the street does it, and our store doesn’t, well, the customer doesn’t know there’s a 20-store minimum,” Erdogan said.

“I think this is going to be the new norm — there’s an expectation of transparency with this kind of information,” she said, noting that many companies will likely see it as a competitive advantage to label menus with nutritional data.

And even though the legislation was enacted as part of the Affordable Care Act, which is under constant threat of repeal, Musiker said the menu labeling provisions of the bill would likely live on.

“A lot of companies have already invested a lot of money in doing this, and it’s in consumers’ interest,” she said. “I think it will largely remain intact.”

It remains to be seen, however, whether menu labeling has the desired effect of helping consumers make healthier food choices.

“It’s a really big national experiment that has been going on for a while, but it is going to go live May 5,” said Musiker. “Only time will tell what impact this has on behavior, and then ultimately on health.”