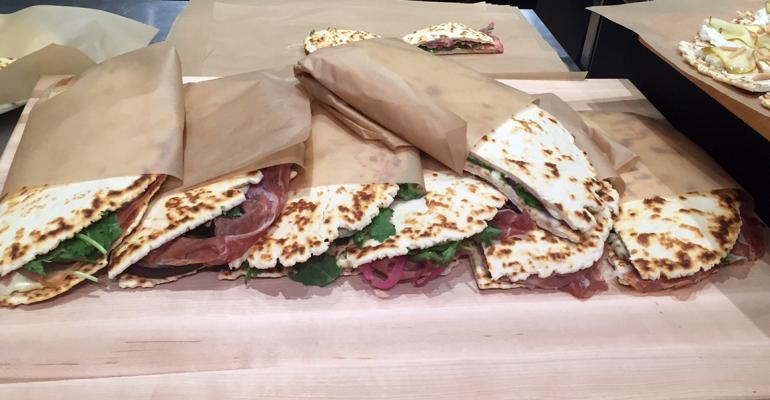 The latest location of Eataly, an Italian supermarket, food hall and restaurant complex, is opening August 11 on the third floor of Tower 4 of New York City’s World Trade Center.

Unlike its sister location in the city’s Flatiron district, the new Eataly will focus heavily on breakfast to cater to the morning Wall Street crowd, and will also have a “Gastronomia” section of prepared dishes for guests to take home after work.

Breakfast features include egg panini sandwiches and focaccia similar to what’s available at the Flatiron location, as well as a new juice bar, and a full-service breakfast space called Orto e Mare.

Additionally, the new space will focus more heavily on its bread program. Partner Joe Bastianich said that the space, overlooking the National September 11 Memorial, has a symbolic meaning for New Yorkers, and that since bread is part of the cuisine of cultures across the world, it acts as a sort of universal peace offering.

The downtown Eataly will make its own bread, focaccia and pizza in wood-burning ovens onsite, but it also will feature the baked goods of other bread experts. Those offerings will rotate monthly, starting with bagels from Kossar’s Bialys, a culinary landmark on Manhattan’s Lower East Side.

Also following the theme of peace, the space’s high-end restaurant, focusing on the cuisine of southern Italy, is called Osteria della Pace, or “peace restaurant.”

The space also features a curated selection of meat raised on GMO-free feed without hormones or antibiotics; sustainable seafood from around the world; specialty cheeses; 100 varieties of Italian olive oil and house-made mozzarella; gelato; pasta; and pastries.

One of the space’s two espresso bars will be transformed into a wine bar for afternoon and evening service.

The new Eataly is also introducing an Italian flatbread sandwich called the piadina to New Yorkers. This specialty of seaside towns in the Italian region of Emilia-Romagna features greens, meats and cheeses prepared to order.

As at other locations, this Eataly also offers the services of a vegetable “butcher” who will clean and chop guests’ vegetables to their specifications at no extra charge.

This is Eataly’s third location in the United States — there is also one in Chicago — and CEO Nicola Farinetti said plans are underway to open locations in Boston and Los Angeles. There are also 13 locations in Italy as well as additional Eataly units in Brazil, Monaco, Turkey, Dubai, South Korea and Japan.

“Every country shops differently,” Farinetti said, noting that in the U.S. Eataly locations that 50% to 55% of sales are at full-service restaurants, 15% at the limited-service stations, and 30% to 35% at retail.

Retails sales are higher in Italy, he said.

Farinetti said that the appeal of Eataly is that it offers something for everyone, from $1.80 focaccia to $100 meals.

“We’re very quality focused and people are very aware of what they put in their bodies,” he said. “So you should rethink your priority for your investment for your money.”

Additionally, he said, “People are rethinking how they invest their time. And Eataly is fun; it’s an experience. We make our focaccia, pasta and mozzarella right in front of you. It’s an engagement, from a customer’s point of view.”