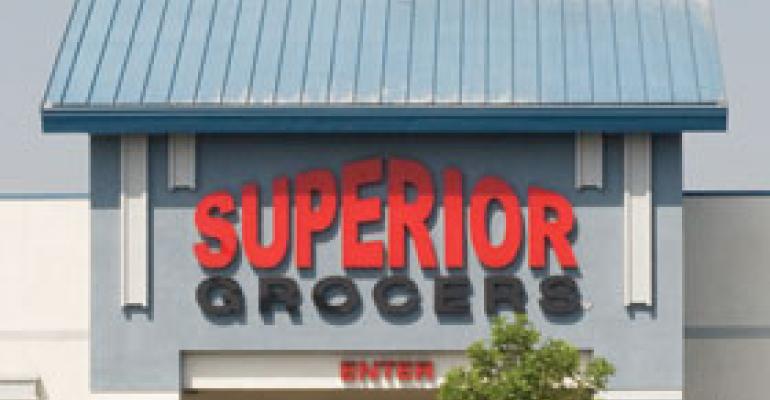 In Southern California, regional chains vie for the Hispanic market

A group of independent chains in Southern California is ignoring mainstream competition and waging a battle among themselves for the more than $5 billion worth of business from Hispanics in the area.

“The Hispanic chains are killing each other for the same dollars,” one retail observer told SN.

At least eight chains operate approximately 300 stores that are serving the Hispanic population of Southern California, and about 100 of those stores are owned by first- or second-generation Hispanic families.

Recently some have grown through acquisition, and some have bolstered their management ranks with industry veterans to help them expand and better compete. 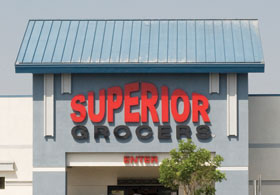 “What separates these companies from the general market is how good they are in meat, produce, hot foods, deli and other specialty departments,” the retail observer said. “They all offer the same amenities around the perimeter, so they all pretty much mirror each other.”

According to Phil Gentile, senior vice president, grocery and marketing for K.V. Mart, Carson, Calif., “We used to compete with only one other Hispanic-oriented chain, but that's all changed in the last 15 years — as increasing populations have increased the need for Hispanic supermarkets and as some of what were once small companies grew and have continued to grow into major operators.

“Today we have any one of three other operators — or sometimes all three — within a mile-and-a-half radius of each of our stores.”

That's part of what separates the chains catering to Hispanics from their mainstream competitors, the retail observer pointed out.

“The [conventional] chains don't know how to do Hispanic. They don't have the passion for it, nor do they understand the finesse of the product assortment. And even if they did, it would be difficult for them to offer the kind of freshness Hispanics demand, given the chains' mind-set.”

Freshness is the key word, he said.

“Hispanic stores are all about foodservice and freshness,” he explained. “Just like the rest of the population, Hispanic people are trying to eat healthy, and they want fresh. Fresh is part of their culture. Cooking from scratch using fresh ingredients is important to Hispanics, regardless of which generation you're talking about.”

Gentile said his stores compete with Ralphs, Vons and Albertsons as well as Hispanic operators, “but the mainstream chains are really not focused on Hispanics. In some stores, they carry some of the packaged products Hispanics like, but the overall approach of the shopping experience is mainstream.”

Aside from offering similar perishables around the stores' perimeter, one factor that makes the Hispanic-centric chains so competitive with each other is that they all buy from the same wholesaler — Unified Grocers, the Los Angeles-based member-owned cooperative — “so they all carry the same private-label assortments, and the same items are on sale to all of them at the same time,” the retail observer pointed out.

One local observer said the most significant evolution among Hispanic operators in Southern California over the last 10 years has been the escalating level of expertise they have acquired — the ability to attract world-class financing and go-to-market strategies on a par with any of the general-market chains.

Part of the reason for the evolution is critical mass, he explained, “and with that mass comes the ability to hire more expertise in operations, procurement and information technology rather than relying on gut instincts.” 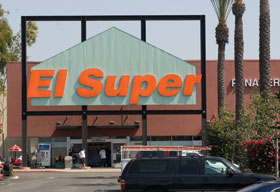 “So everything has improved, including store cleanliness, employee training, customer service, marketing strategies and itemization — and they don't make many mistakes.

“Most of the Hispanic retailers operate on a par with Gelson's Markets — with stores that are well-stocked; with friendly, helpful, knowledgeable employees in uniforms and with product that is fresh and attractively displayed.”

Although large Hispanic populations exist all over the country, California claims the largest concentration — 14 million — with 8 million in Southern California alone, compared with 9.5 million Hispanics across all of Texas; 4.2 million in Florida; and 3.4 million in New York, according to U.S. census data.

“The only place with more Mexicans than the Greater Los Angeles area is Mexico City,” Gentile pointed out. “So Southern California is the largest single area of the country for Hispanics.”

“With the larger number of Hispanics in the marketplace, more operators in Southern California have been able to expand their businesses and become powerful chain operators, with the result that they ultimately compete against each other more than Hispanic operators do in any other parts of the U.S.,” he said.

According to Hugo Enciso, national sales manager for Azteca America, a national network of Spanish-language TV stations based in Glendale, Calif., “There are so many successful Hispanic chains in Southern California because it's easy to find strategic locations with high Hispanic population densities.

“The Hispanic population in Los Angeles is more than 50%, whereas in other, smaller cities it's closer to 20% or 30%. So there are more opportunities for companies to grow their businesses in Southern California.

“And because Hispanic populations tend to be concentrated, there will certainly be opportunities elsewhere for similar chains to develop, given the rate of growth among that population.”

Gentile said he sees tremendous growth opportunities in Southern California “as the Hispanic population continues to spread out and as the chains vacate more low-income areas. Los Angeles is already pretty congested, and it's likely to become even more so over the next few years.”

However, there are sill plenty of opportunities for growth, he said — north of the city in the San Fernando Valley and Ventura, south to San Diego and east to Las Vegas.

Going forward, Gentile said he expects to see more diversity among Hispanic operators in terms of how stores are laid out and the products and services they offer. “As the Hispanic population becomes more acculturated, we will probably see some upscale formats developing to serve a higher-income shopper,” he said.

As with mainstream chains, K.V. Mart adapts each location to the neighborhood, Gentile pointed out, with some stores offering a product mix that appeals to a middle-income customer while others are more downscale.

Several Hispanic chains are also adapting to the use of new social media to go after a younger shopper, he said. “We're beginning to branch out to supplement the traditional weekly flyers with ads on Facebook and Twitter,” he noted.

According to Rosenblum, one issue the established Hispanic retailers can't afford to lose sight of is competition from the bodegas. “Just as the Hispanic chains claim they are more in touch with the needs of the Hispanic shopper than the general-market chains, the small independents or mom-and-pop bodegas claim to be in even closer touch 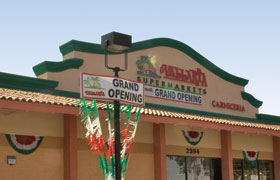 “They may stake their business on fresh meats or a more focused grocery selection, and they offer some shoppers a place to go to find comfort in a more relaxed environment.”

Observers differed on the likelihood of consolidation among the existing Hispanic players in Southern California.

“I don't see these companies consolidating with each other,” the industry observer told SN. “All of them have relatively young management teams — people who want to continue to pursue growth opportunities beyond where they are today.

“And there is certainly room for them to grow — maybe even with a move south of the border into Mexico, as H-E-B has done.”

According to the retail observer, “There's enough business for all of them to continue on their own for years to come — though it's possible a smaller company like Numero Uno [with eight stores] could be sold by its investors when the time comes for them to cash out; and it's also possible Superior Grocers could someday sell its business because its stores' size would fit nicely into another chain's operations.”

“Given the competitive pressures of the marketplace among the mainstream players, it's probably inevitable that some of these Hispanic retailers will have no choice but to figure out how to get more sales — and consolidation may be the way they do it,” he said.

Some consolidation has already taken place in the region, with El Super acquiring seven Gigante stores in 2008 when the Mexico-based retailer failed to catch on in the U.S. and subsequently acquiring 11 Fiesta Mexicana stores in the San Bernardino area last year; and with Vallarta adding four stores in central California in 2010 when Pro's Ranch Markets left the state to concentrate on expansion elsewhere.

Besides going after real estate, several Hispanic-centric companies have gone after industry expertise from mainstream companies and from each other as they have matured, observers said.

For example, Northgate Gonzalez Markets hired Tom Herman, who had been a regional vice president for Supervalu, to boost its abilities in procurement and best practices; and Cardenas Markets hired Rick Fry away from Northgate, where he was chief merchant, and named him president and chief operating officer.

As for whether any of the existing chains will someday seek to broaden their appeal beyond their Hispanic niche, the industry observer said it's hard to say. “A lot of acculturation has taken place among second- and third-generation Hispanic consumers, so it's difficult to know what fourth-generation Hispanics will look for in a supermarket,” he said.

“However, it's very possible some of these niche players could expand to the point where they become general-market operators someday.”

Enciso said he believes it's possible some of today's Hispanic chains could try to pick up sales by broadening their appeal to a wider customer base. “But though they will reach out to the general population, they are not going to change the way they market to their core audience,” he pointed out.

Rosenblum said he thinks it unlikely these operators will ever go after the general population. “It's true they may attract a broader customer base right now, when people are very value-driven and don't care where they shop to get the right product at a great price,” he explained.

“But what these guys have realized is their points of differentiation are what appeals to the Hispanic consumer, so to give that up and try to outdo Ralphs at being Ralphs would be like sticking their head in a lion's mouth.

“These chains will grow and expand only by sticking to the niche they serve. If they tried to become too much of a traditional supermarket, they would lose their competitive point of differentiation.”

According to Rosenblum, there are three major points of differentiation for Hispanic operators: price and promotion; assortment; and merchandising.

“For Superior Grocers, merchandising is a passion,” he explained. “It makes huge statements with end displays that may be 8 feet wide and stacked to the ceiling, and it also offers low prices as a major draw.

“Northgate Gonzalez Markets has phenomenal perishables, and it's really an event to see the meat and seafood counters at its stores. Northgate tried to be more promotional at one point, but its niche is to appeal to a more upscale, higher-end Hispanic shopper.

“El Super, on the other hand, has less assortment than Northgate, but it drives home a price message that sets it apart; while Cardenas Markets is more like a Northgate in terms of its wide variety.”

In reaching out to Hispanic shoppers, sampling is a key ingredient, Enciso pointed out. “One thing Hispanics like is in-store sampling. That's a huge factor for them. If supermarkets want to attract that consumer, they must partner with vendors, particularly companies that offer Hispanic products those consumers recognize.

“And parking-lot events, which the general markets tend not to do, are also popular among Hispanic operators. Those draw a lot of people to a store.”

Many of the Hispanic-centric chains also build loyalty by offering shuttle service to customers who come in on foot to shop and need transportation home, Enciso pointed out.