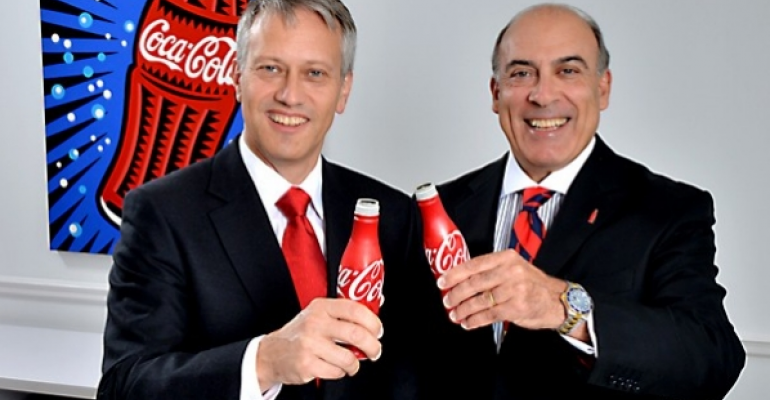 While the timing of Coca-Cola’s top-level succession announcement is a bit of a surprise, the move isn’t entirely unforeseen, said Howard Telford, senior beverage analyst for Euromonitor International, Friday.

The Coca-Cola Co. Friday announced a restructuring under which James Quincey, president and COO, will succeed Muhtar Kent as CEO, effective May 1, 2017. Kent will continue his role as chairman.

“The transition in leadership at the company in 2017 will conclude a busy period of transition in Coca-Cola’s overall business,” Telford said in a statement. “The company is working towards a 100% refranchised bottling model in North America while refranchising to key anchor bottlers internationally as well, as it seeks to become a more nimble, profitable and less capital intensive operation.”

Kent recommended that Quincey be his successor, and Coca-Cola’s Board unanimously approved.

“Managing The Coca-Cola Company to ensure our long-term growth requires a thoughtful and orderly succession planning process,” said Kent in a statement. “I have been engaged with our Management Development Committee and the full Board on talent development and succession discussions throughout my tenure as CEO. We are certain that James Quincey is prepared for these new responsibilities and is the absolute right choice to lead our company and system into the future.”

Quincey was named Coca-Cola’s president and COO in August 2015. Prior to this role, he served as president of The Coca-Cola Co.’s Europe Group. Under his leadership, the Europe Group was the company’s most profitable operating group as it strategically expanded its brand portfolio and improved execution across the geography, according to Coca-Cola.

Quincey served as president of the Northwest Europe & Nordics Business Unit (NWEN) from 2008 to 2012. He led the group during the acquisition of innocent juice in 2009, which is well on its way to becoming one of the company’s billion-dollar brands, according to Coca-Cola.

From 2005 to 2008, Quincey was president of the Mexico Division where he grew market share for brand Coca-Cola and expanded the company’s portfolio with the relaunch of Coca-Cola Zero and the acquisition of Jugos de Valle, one of the company’s 20 brands that generates more than $1 billion in annual revenues.

Quincey joined Coca-Cola in 1996 as Director, Learning Strategy for the Latin America Group, and went on to serve in a series of operational roles in Latin America, leading to his appointment as President of the South Latin Division in 2003.

“I am truly honored and humbled to lead this great company into the future,” Quincey said in a statement. “Muhtar has been a catalyst for change at The Coca-Cola Company — driving the transformation of our global bottling system, expanding our product portfolio and making sustainability a business imperative. I am committed to continuing my strong partnership with Muhtar, our talented management team and associates, and our valued bottling partners to continue this momentum and capture the enormous opportunities in front of us.”

Telford noted that Coca-Cola has made substantial investments in growing its still beverage brands and healthier options in the last several years as it recognized the need to respond to declining soda consumption in key markets.

“The challenge for the next leadership team at the company will be ensuring continued sales growth in this new consumer environment, impacting both developed and developing markets, via higher value transactions, adjustments to price/package and targeted brand acquisitions in new, high value categories,” Telford said.