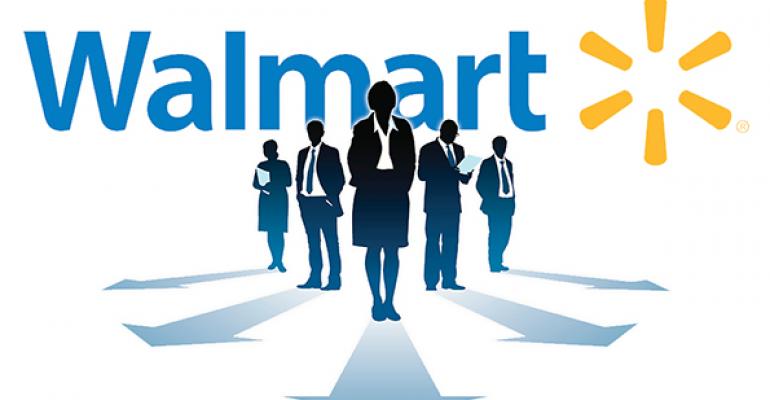 Wal-Mart Stores has named new EVPs for its Neighborhood Market and Supercenter divisions as part of a flurry of new leadership appointments and a new operations structure under U.S. COO Judith McKenna. The changes include the trimming of EVP roles for Walmart East and Walmart West and Walmart Realty in what was described by McKenna in a memo as a means of simplifying its leadership structure.

McKenna was named U.S. COO in December as part of a new leadership under U.S. CEO Greg Foran.

Mike Moore, who previously served as EVP of Walmart’s Neighborhood Markets division has been named EVP of Supercenters for Walmart, while Julie Murphy, formerly the EVP of Walmart West, assumes Moore’s role as EVP for Neighborhood Markets. “Mike and Julie are outstanding leaders whose long-term experience within Walmart operations has equipped them to take on these expanded roles,” McKenna said in a memo.

Joaquin Gonzalez Varela, EVP-Walmart East, is retiring and his role will not be filled, the retailer said. Varela, a 25-year employee of Walmart, has served in that role since 2008 and will retire effective June 15.

“A culture champion and passionate leader whose enthusiasm has inspired associates across our company, Joaquin has been a role model for several of our current and future leaders,” McKenna said. “We want to thank him for his long service and contributions to our company.”

In addition, the Bentonville, Ark., company is restructuring its central operations team, naming current SVP for innovations Mark Ibboton to a new role as EVP-central operations U.S., where he will take on the additional responsibilities of asset protection and partnering with global e-commerce to implement grocery home shopping within operations, McKenna said.

“Centralizing these activities within one team will further align and simplify efforts that affect our stores,” McKenna said. “Under Mark’s leadership, we’ll continue our tremendous progress with our focus on the customer.”

Walmart also said that Pam Kohn, EVP-Walmart Realty, was leaving the company effective June 2. Her departure will allow the retailer to align its U.S. realty team to report to McKenna. JP Suarez, currently SVP of real estate strategy, design and construction, has been named SVP-Walmart Realty. In his current role, Suarez has led real estate growth strategy and has identified efficiencies in the area, McKenna said.