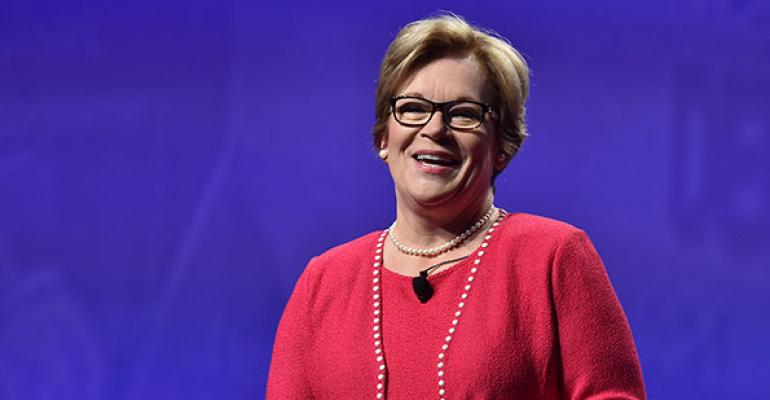 If retailers commit to selling one more meal at home per family per week, it could increase weekly industry revenues by more than $500 million, Leslie Sarasin, president and CEO of Food Marketing Institute, said at FMI Connect in Chicago.

“That’s a compelling business case for this [family meals] venture,” she said during the keynote session titled FMI Speaks: The Noble (and Ever-Evolving) Work of Feeding Families.

According to Sarasin, research indicates consumers are eating 158 million dinners alone or away from home — “all missed opportunities we could be seizing. And if we multiply 158 million by the four people in a typical household, that’s 682 million servings a week that are not going into the basket.

“Further, if just half of the 47 million households with children joined with us to commit to one more meal at home a week, it would translate into 94 million more servings per week. And if each serving were priced at a meager $6 per dinner per person, it would result in increased revenues of $564 million per week for the food retail industry.

“Clearly, there is real money there.”

In a recent SN interview, Sarasin emphasized that research shows many benefits to families eating meals together. These include lower rates of teen alcoholism, drug abuse and truancy. She also said at-home meals are often more economical and healthier.

Sarasin said during the Speaks presentation that the industry has “a thousand tactics we can utilize to help customers achieve a goal of another family meal together each week.

“We’re not asking you to conform to any one approach or formula but to build on the strategy that best aligns with your brand’s prescriptions and your corporate values.”

One approach retailers could take, Sarasin suggested, would be to make a stronger effort to reduce the number of meals skipped or eaten outside the home.

Out of a total of 5.1 billion adult meals possible each week, 890 million, or 17%, are skipped, usually breakfast, while another 1.1 billion meals (25%) are consumed away from home, she noted.

Based on research FMI is scheduled to release this summer, Sarasin said 53% of the 5,000 shoppers interviewed said they eat dinners out for convenience, 32% for variety and another 32% for social factors, with only 6% citing health, “and clearly food retail dominates the competition on taste, cost and health,” she pointed out.

“So if we can help make ready-to-eat family meals more convenient and more socially conducive for the preparer and also diversify our offerings, the question, ‘do we eat in or out?’ won’t even be up for discussion.”

She also cited statistics indicating 1.3 billion meals are eaten at home alone, of which 42% are breakfasts, “so if we’re going to successfully help families achieve the goal of eating at least one more meal together than they currently do, we will need to literally put all meal possibilities on the table, including breakfast.

“That means helping them with easy structures so breakfast becomes a meal not to be skipped, eaten out or eaten alone.”