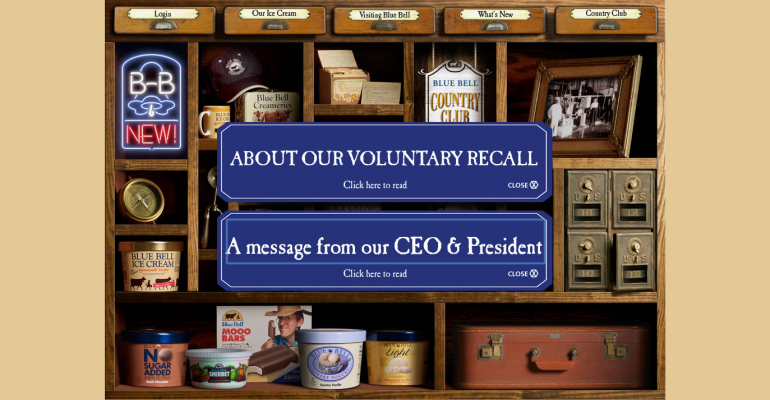 Blue Bell Ice Cream, based in Brenham, Texas, announced last night that it is voluntarily recalling all of its products due to a risk of contamination with Listeria monocytogenes. The recall extends to ice cream, frozen yogurt, sherbert and frozen snacks.

The company has undergone several rounds of recalls this spring due to the link between Blue Bell products and the Listeria outbreaks. After the earlier recall in April some retailers preemptively removed all Blue Bell products from their shelves, including Kroger, H-E-B and Sam's Club, according to the Associated Press.

In the Centers for Disease Control's last update on April 8, the products were thought to be linked to eight hospitalizations and three deaths in Kansas and Texas.

"We’re committed to doing the 100 percent right thing, and the best way to do that is to take all of our products off the market until we are confident that they are all safe. At every step, we have made decisions in the best interest of our customers based on the evidence we had available at the time," said Blue Bell CEO and president Paul Kruse, in a prepared statement.

"We have brought in one of the world’s most respected food safety microbiologists to inspect our plants and systems to help us get to the bottom of this issue."

Blue Bell said the company initially thought the contamination was isolated to one machine in its Oklahoma facility, but found evidence of contamination in its Texas facility as well.

Going forward, Blue Bell said it will move to a "test and hold" procedure for the products it manufacturers, only distributing products that have passed food safety tests.

In addition, Blue Bell pledged expand its daily cleaning and sanitizing, expand its swabbing and testing system by 800% for more surfaces, send daily samples to labs for testing and give employees more training.