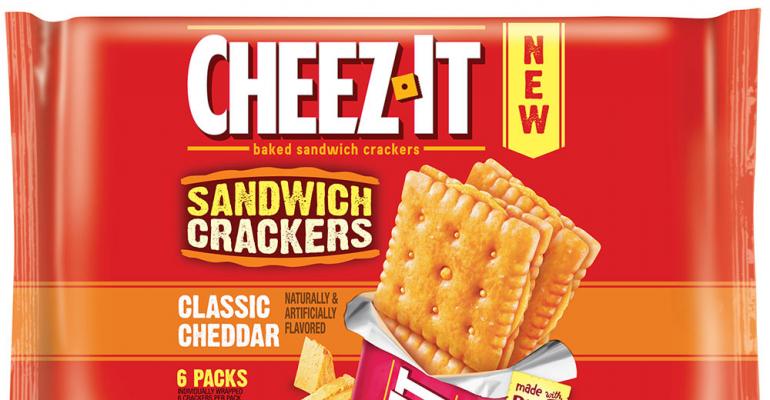 “There’s no playbook for what we’ve just done.”

Kellogg Co. has completed the wind down of direct-store delivery for its snacks division — a move that will result in a smaller but more profitable business while freeing up resources to devote to online growth, Deanie Elsner, Kellogg’s U.S. snacks president, said in a presentation this week.

Kellogg’s said it would do away with DSD in February and competed the transition of items like Cheez-It crackers and Keebler snacks from route-based salespeople to retailer warehouses late last month, Elsner said. August, she acknowledged, was an “ugly period” for the transition, as many customers had yet to make adjustments to the new shelf setup in stores.

She argued however that the time had come to make the move, noting that Kellogg’s products didn’t have the shelf velocity or the fragility to require special handling, and that the more sophisticated warehousing, pricing and shelving capabilities retailers use today made DSD more of a challenge than a help to them. But the most important reason, she said, was that DSD for all its costs did little to address that fact that consumers were increasingly buying items online.

“The way [our customer] shops today, she is fragmenting her purchases across channels, and many channels that she is going to, we don't service with DSD,” Elsner said. “So, for us, to unlock those resources, to refocus against our brands, was one of the most important things we could to transform this business.”

John Bryant, Kellogg’s CEO, in the same presentation noted that the company’s U.S. e-commerce sales grew by 70% in its most recent quarter and that experience in overseas markets suggests the company can command a greater share of its categories in click-and-collect than in stores.

“We recognize that e-commerce is going to transform the retail environment over the next decade. We're seeing it around the world,” Bryant said. “We're rapidly approaching the situation where over half our sales in China are direct to consumer. We have markets in Europe with over 10% of our sales going to click-and-collect-type programs or buy online, pick-up-in-store programs. And while e-commerce in the U.S. is only around 2% of the food industry, it is growing significantly.”

The move out of DSD included rounds of negotiations with retailers, a reduction in the number of SKUs and higher prices for items that remain, Elsner said. While acknowledging “there’s no playbook for what we’ve just done,” she said she expected to see faster growing and more profitable sales by the middle of next year.

“Ultimately, what that gets us to is a less complex portfolio that is actually more focused and more scaled on primary displays,” she said. “We'll have higher moving velocity SKUs that will drive more top-line sales, that will be more profitable, and drive stronger shares.”

In other matters, Kellogg’s reiterated expectations of around a 3% sales decline in the fiscal year with most growth in emerging markets and snacks. It is refocusing Special K, which has required a new marketing message as consumer health and wellness preferences shifted.

“Across the 2000s, we saw tremendous growth from Special K behind a weight-management positioning supported by low-fat, low-calorie foods,” Bryant said. “Unfortunately, consumers don't want to count calories anymore and fat is no longer as negative as it once was. So, we had to change the positioning of Special K from weight management to inner strength.”

Products under the brand have changed as well, he said, noting the launch of Special K Nourish and the decline of items like Special K cracker chips.