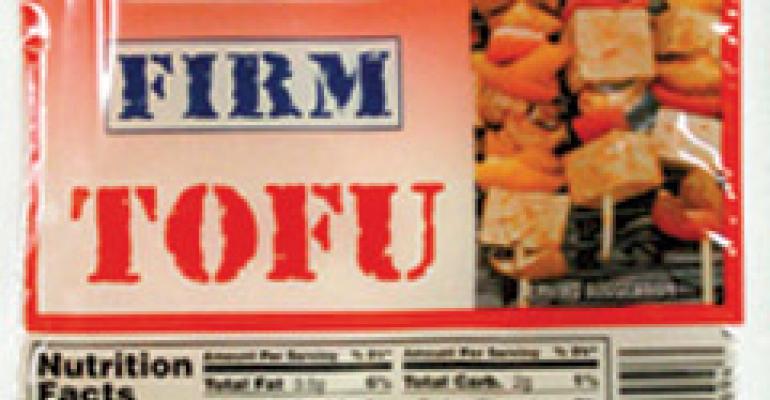 Despite many health claims, sales of meat-free proteins just can't seem to catch on

SOY HAS BEEN CULTIVATED FOR CENTURIES IN ASIA, and since 1765 in the United States. Yet, Americans remain forever on the verge of embracing the legume in all its forms — particularly the solid brick known as tofu.

“It's never an easy sell to get someone to try something that might look unappetizing, and the texture is what the new user has to get over,” said Cindy Silver, corporate nutritionist for Lowes Foods, a Winston-Salem, N.C.-based supermarket chain.

The United States is the world's leading producer of soybeans, growing more than 80 million metric tons a year (China, by comparison, cultivates roughly 20 million metric tons). It has multiple uses — auto pioneer Henry Ford even used soy in the manufacture of his famous cars.

Soy has a presence in just about every store department, and sales of soy-based products vary widely depending on what's on the shelf, and where it is in the store. For instance, consumers who pass by tofu in the produce section will seek out soy beverages at the dairy case.

“Soy milk is easy because you can just swap out,” noted Nancy Chapman, executive director of the Soyfoods Association of North America, Washington. “It doesn't take any effort to reach for soy milk instead of regular milk. It's just as easy to use on cereal or in coffee, and you don't have to wonder, ‘What do I do with this stuff?’”

Such questions are quite common at the retail level, according to Tina Miller, one of five Healthy Living advisors at Meijer, the Grand Rapids, Mich.-based chain of superstores. Miller suspects that one reason for uneven sales throughout the soy category is a lack of inspiration.

“I can pick up soy milk and automatically know what to do with that, but when I look at a brick of tofu, the texture and taste is different and it takes time to get used to,” she said. “Unless they're motivated because they're a health foods consumer, people are going to reach for the real products because the familiarity just isn't there with tofu.”

According to SymphonyIRI Group, sales of refrigerated milk substitutes, including soy, totaled $548 million for the year ending Oct. 31, up more than 10% from the year before — and that's only a fraction of the category. Sales of shelf-stable versions were nearly $197 million, an increase of nearly 24% from 2009 figures..

By comparison, data from SPINS show that sales of tofu for the same period rang in at $62.4 million. The number includes sales of both plain and seasoned tofu. The larger category of meat alternatives (which includes meatless burgers, deli, ground and tempeh/seitan) had sales of $90.4 million — still well below the beverage figures. Nevertheless, the overall market is strong, says Chapman.

“We are reaching, on a regular basis, folks that are vegetarian, always reaching the Asian population and always those who are health-conscious,” she said. “It's a market that's growing, and still has great potential.”

Soy's prospects benefit in large part from its versatility. While Americans might not be consuming tremendously large amounts of traditional tofu or tempeh, soy shows up in many food products as an ingredient. Soy protein isolates, concentrates and flours are widely used in many snacks, cereals and prepared foods. According to Soytech, a consulting firm, the amount of soy protein used in food worldwide reached nearly 2.8 million metric tons in 2009, up by more than 50% over the past decade. Manufacturers add soy as a filler for processed meat products, to fortify beverages and snack items, and as a prime ingredient in frozen vegetarian entrees.

That conventional shoppers are buying and eating soy unwittingly doesn't change the fact that many hesitate when it comes to adopting meat analogs as a regular part of their meals.

“It's a great alternative and will fit into many recipes that call for chicken or beef. It's not as high in protein, but it's a good source,” said Silver.

The Food and Drug Administration takes a positive view of soy. The agency approved a qualified health claim in 1999 stating that “25 grams of soy protein a day, as part of a diet low in saturated fat and cholesterol, may reduce the risk of heart disease.” The endorsement signaled a new era of growth for soy products, and manufacturers reported significant sales increases in the years following the FDA announcement.

“After the FDA granted the health claim in 1999, the market expanded very rapidly because we could use the health claim,” recalled Yoko Difrancia, marketing manager for House Foods America, Garden Grove, Calif. “And then, the market peaked and matured. We need a second breakthrough.”

The official claim highlighted evidence suggesting that soy protein's positive effect on heart health was due to its ability to lower bad cholesterol and triglycerides, and raise healthy cholesterol levels. Nutrition experts also noted that soy is an excellent source of a complete protein, which is unique among plant sources. By itself, soy has no cholesterol and little saturated fat.

“Soy foods are a strong and good source of nutrients like potassium, iron, fiber, folic acid and magnesium,” said Chapman. “Some products are now being fortified with B12. It's the one nutrient that is common to animal proteins, but not available in plant foods.”

Health isn't the only issue supporting soy. Consumers have become increasingly concerned about animal welfare, and they're seeking out vegetarian meal options. Initiatives such as the “Meatless Monday” campaign and reports of colleges, businesses and restaurants creating vegetarian menus have helped maintain demand.

“Vegetarians and vegans are a prime consumer target, as are some of the cultures around the world, such as Asians,” noted Lowes' Silver. “As dietitians go about their job of offering healthy options, more and more people might be inclined to try soy or tofu as part of a meatless meal at least once a week.”

Luckily for the uninitiated, tofu is a master of mimicry and extremely versatile — two attributes that retailers highlight when discussing how easily it can be adapted to American recipes. Besides the traditional silken and firm bricks, tofu can be shaped into hamburger-like crumbles, slices of deli meat or cheese or even hot dogs. It absorbs flavors well and in most cases texture can be disguised as something else.

“Just open a bag of crumbles and use it as ground beef, or you can grill veggie burgers or dogs outside,” said Chapman. “There's tofu that's precooked, precut and already flavored. You just open it up and use it.”

In discussing tofu with Meijer customers, Miller stresses the convenience factor, noting that many items are specifically formulated as a substitute for their meat counterparts.

“I could whip up a Super Bowl Sunday chili and no one would know if I had beef or soy crumbles in there,” she said. “It really works out well for anyone who doesn't have a lot of time to experiment with pressing, marinating and cooking whole tofu. Products that easily replace regular proteins are the ones where we're seeing growth.”

Internal research conducted by House Foods shows that tofu, and even soy in general, still gets a bad rap as a niche product for vegetarians, or a foreign mystery substance. As a result, most manufacturers have invested tremendous amounts of time and energy into making soy more familiar to the American palate.

“Our research and development has been focused on making ready-to-cook or ready-to-eat meals, and products that are more convenient in general,” said Difrancia, adding that House Foods last year developed a line of ready-to-eat noodle entrees called So-Yah! in an effort to make soy and tofu more appealing.

One retailer that has had no problem selling tofu is Sunflower Farmers Market. The Phoenix-based chain of natural food stores recently introduced its own brand of tofu. The five-SKU line includes organic and conventional varieties, and all are certified GMO-free. The category is currently up 34% in dollars and 50% in units over the last 13 weeks, according to Sage Horner, Sunflower's vice president of purchasing and supply chain.

“We transitioned out of some brands and rationalized down to ours, and we're seeing both dollar and unit sales increases,” he said. Pricing is competitive at the chain, where the slogan is “Serious Food… Silly Prices!” Conventional varieties typically sell for 99 cents, and organic is offered on deal at two for $3, or $1.29 each when they're on ad.

“It's price point-driven for us. We have a good, quality product that's been received extremely well,” said Horner.

For conventional retailers, success comes from highlighting soy and tofu's health benefits, developing simple recipes and constantly looking for new products. Dietitians like Miller think manufacturers could do more to promote soy. She would love to see a booklet demonstrating ways consumers can start with simple steps, such as adding silken tofu to smoothies, all the way up to marinating cubes of extra firm tofu for a stir-fry.

“There's not a lot of promotion and education of health professionals on how to use tofu, and there are a lot of dietitians who don't know what to do with it,” she said. “Some of the barriers preventing tofu from getting into the hands of more consumers all focus on educating the educator, and then the consumer.”

At Meijer, Silver believes that sampling is the best way to build interest, and would like to see more manufacturers set up demo programs. In the meantime, she reminds her shoppers that tofu is basically made from soy milk, in an effort to make it more familiar.

“I sometimes ask my group if anyone has used tofu, and how they used it, because that seems effective in breaking down the barriers as well,” she said. “It helps to hear other people say that it's not weird-tasting and it's something their family enjoys… Someone else who's lived to tell about it.”

Soy's reputation as a health food is constantly being challenged, and may be yet another reason why products like tofu aren't as popular as they could be.

Soy consumption has been linked to thyroid damage (resulting in weight gain), the malabsorption of minerals, digestion problems and certain cancers. And, while the Food and Drug Administration granted a qualified health claim for soy and heart health in 1999, organizations that initially supported the claim have gone so far as to reverse their positions. That is what happened in 2006, when the American Heart Association changed its verdict about soy, saying a review of research indicated that soy had little or no effect on cholesterol levels and was unlikely to prevent heart disease.

An area of concern among women has been the effect of phytoestrogens on the body. These plant-based estrogens — know as isoflavones in soy — are believed to mimic natural estrogen, and overconsumption could increase the chances of breast and other cancers. However, recent studies contradict that conclusion; indeed, one released last year found that breast cancer survival rates could be improved with soy consumption. As with everything else, experts discussing soy products counsel moderation.