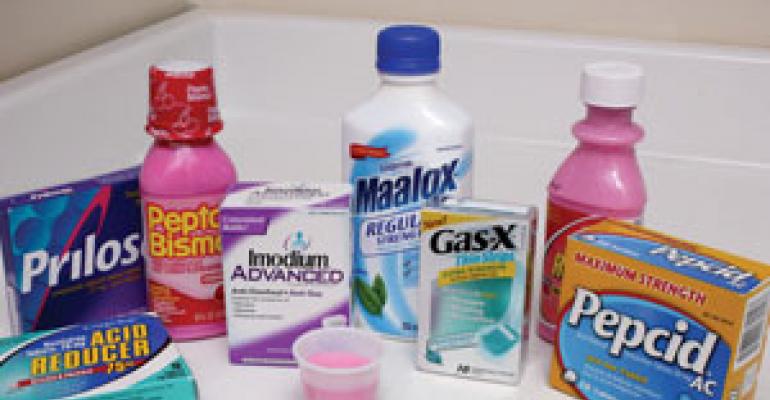 Due to rising health care costs, more Americans are researching their own health conditions gastrointestinal being among the most prominent and are likely to shop retailers that are willing to help them along the way. While sales are up for the stomach remedies category, retailers that aid consumers in the health care decision-making process are at an advantage, retailers and industry experts said.

Due to rising health care costs, more Americans are researching their own health conditions — gastrointestinal being among the most prominent — and are likely to shop retailers that are willing to help them along the way.

While sales are up for the stomach remedies category, retailers that aid consumers in the health care decision-making process are at an advantage, retailers and industry experts said.

Overall, sales for the gastrointestinal tablets category for the 52 weeks ending March 25, 2007, were up 7.9% from a year ago to $1.7 million, according to Information Resources Inc., Chicago. Gastrointestinal liquid remedy sales were up 5.18% to $482.6 million.

In addition, the change of products such as Prilosec OTC, from Procter & Gamble, Cincinnati, to over-the-counter from prescription-only medication, “has definitely opened the category to wider use,” said Jim Linden, director of pharmacy, Nash Finch Co., Edina, Minn.

Prilosec OTC was introduced in 2003. According to IRI, it is the top-selling antacid tablet, up 9.48% from last year to $1.05 billion. It is also the highest-earning single product being tracked by IRI in the category.

“MiraLAX is a long-prescribed formula that chronic users are very familiar with, and will help folks that have tried gritty mixes or can't swallow pills,” Smith said. “The product can be mixed with any liquid beverage.”

This product will boost sales because “patients are always looking for something that will improve their personal situation, so they most likely will try it,” Linden said.

Other products that remain “rocks in the category” at Bi-Lo are Pepcid AC, Zantac, Pepto-Bismol and Tums, according to Smith.

Pepto-Bismol, from Proc-ter & Gamble, was first in the stomach remedy liquid/powder category, up 4.31% to $61.1 million, IRI reported.

The majority of these popular products target heartburn, also known as gastroesophageal reflux disease, or GERD. “It would be fair to say that America, for many health conditions, is undermedicated,” said consultant Jim Wisner, president, Wisner Marketing Group, Libertyville, Ill. “GERD would be among the more prevalent of those, with the risk of esophageal damage — and if you're not treating acid reflux, it's greater.”

“What we see happening across health care is an increasing tide of consumerism,” said David Stefan, executive director of health care practice at J.D. Power and Associates, Westlake Village, Calif.

This trend puts the focus on the customer, how satisfied they are and what their health-related experiences are at retail, he said.

One way to help ensure customer satisfaction is to highlight products based on symptoms, Wisner said. “Direct shoppers to information about certain health conditions, and invite them to get information while they are traveling down the aisles.”

A study conducted by Wisner Marketing Group for Healthnotes, Portland, Ore., and released last year found that over 40% of shoppers in the research purchased a product as a direct result of information they had obtained from a Healthnotes kiosk.

For the study, the kiosks, which deliver health and wellness product information, lifestyle articles and targeted advertising to consumers via a touchscreen, were placed in three drug stores, with three demographically comparable stores chosen as control stores.

The employees in each test store were given training on the kiosk, and in-store signage was used to increase customer awareness. “Healthnotes experimented with directing customers to the kiosks by highlighting the products with a sign that said, ‘Do you want to know about this condition?’ and directing them to a kiosk to find products suitable for a particular symptom or condition,” Wisner said.

Brochures were handed out at the pharmacy drop-off and pick-up windows. The results of the study were compiled from consumer interviews, employee interviews, sales data and kiosk usage data over a 12-week period.

Education for the pharmacists and pharmacy staff on OTC drugs is another important factor, Wisner said. “The majority of medications being taken are still non-prescription, so if you are looking to take care of a patient you need to know about those as well.”

“Publix pharmacists are always available to our customers for counseling on OTC medications as well as to fill prescription needs,” Brous said.

Both Bi-Lo's Smith and Nash Finch's Linden agreed. “It's what makes our pharmacies unique and personalized,” Smith said.

Wilson Health Information, located in New Hope, Pa., has ranked Publix the No. 1 supermarket pharmacy for customer satisfaction — based on responses from about 32,000 pharmacy customers in the top 23 U.S. metropolitan markets — for the past four years, Brous said. “Our customers have recognized the service provided by our pharmacists,” she said.

“Information leads to sales, it couldn't be any simpler than that,” Wisner said. “Going to the doctor is a pain, and if people see something on the market that might let them treat themselves, they'lltry it.”