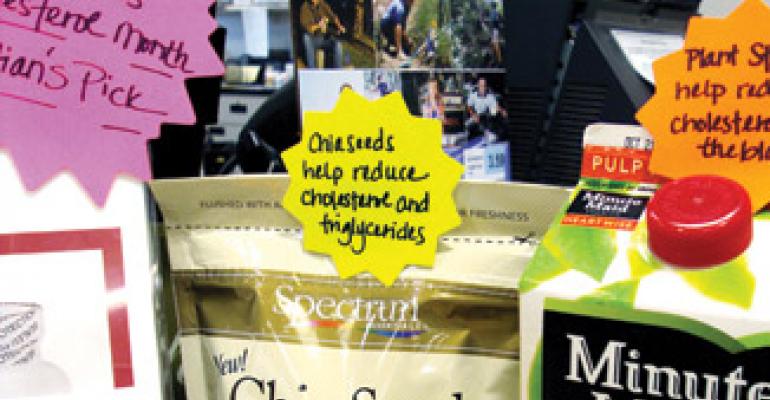 The line between food and pharmacy is blurring as apples, cereal and other foods get space once reserved for health care items

Pharmacy customers can not only fill a prescription, but also buy special-diet foods from a nearby merchandising rack at a Bashas' store.

“Now, if a person is filling his cholesterol medication, he can't help but notice a variety of heart-healthy products,” Barbara Ruhs, Bashas' corporate registered dietician, said

The new schematic is in test at one of the retailer's Chandler, Ariz., units, and will be rolled out to three additional units soon, according to Ruhs.

Gluten-free breakfast, snack and lunch products occupy two facing shelves, while low-sodium and heart-healthy get one section each.

The featured items duplicate products also sold in the main part of the store, and are the top sellers in each category.

The heart-healthy section is comprised of products like high-fiber cereal, low-sodium soup and tuna fish. In the low-sodium area, there are salty snacks, canned vegetables and meal starters.

The new merchandising strategy is part of a larger effort at Bashas' to combine food and pharmacy. The chain is also printing customized food recommendations on the back of prescription advisory sheets. That means that if a patient fills a prescription for medication to help ease migraines, she may get information about how herbal teas or other foods and beverages can help.

The time is right to unify food and pharmacy because people are looking for ways to save on health care costs.

“People are paying much more attention to staying healthy and avoiding going to the doctor,” Ruhs said. “They're being proactive with their health.”

At the same time, joining the two departments can help retailers compete against traditional pharmacies, which have become a bigger threat due to expanded grocery sections.

“We have to defend our turf,” she said.

At the Hy-Vee store on Fleur Drive in Des Moines, Iowa, store dietitian Anne Cundiff works the pharmacy department to tie in food and pharmacy under a common monthly theme. During September, in honor of cholesterol month, the pharmacy counter features several food and beverage items touted for having cholesterol-lowering abilities, including chia seeds, which are rich in omega 3 acids, and Minute Made Heart Wise orange juice, which contains plant sterols.

For diabetes month in November, the pharmacy department will display Hi-Maize high-fiber flour, which is said to control the glycemic index.

Though the displays contain only a few items, they are effective in stimulating impulse sales among those who otherwise would just come in for a prescription and leave, said Cundiff.

She speaks in advance with the store's pharmacists to brief them on what products will be featured in their department in a given month.

“We give them talking points and ways to connect the food with patient needs,” she said.

Merchandising food and pharmacy makes sense at a time when more consumers understand the connection between food and health, according to Cundiff.

“Dietitians and pharmacists can be a wellness team,” she said.

It also positions Hy-Vee as a supermarket that's more than just a food retailer, but a place that cares about its shoppers' overall health.

The greatest challenge is finding enough display space in the pharmacy department, she said. Sometimes, Cundiff will put the food items on tables near the waiting area; other times, directly on the pharmacy counter.

As reported in SN, the chain recently included empty bags of Wegmans Food You Feel Good About Just Picked frozen fruits in one such presentation. The fruits were chosen because they have no sugar added and are free of artificial colors, flavors and preservatives.

Such efforts make sense as long as retailers get the full cooperation from pharmacists, said Bruce Kneeland, a pharmacy consultant in Valley Forge, Pa.

The reason for this is that pharmacists spend most of their time in the background filling prescriptions. While they willingly respond to customer inquires about dosing and potential drug interactions, they rarely initiate a conversation, he said.

That's why management needs to use signage or other tools to encourage customers to approach the pharmacist to get more information on how certain foods can help various medical conditions.

Piggly Wiggly South Carolina, Charleston, S.C., does just that under a new strategy of placing groceries on the counter of its 13 pharmacies.

Each month, about two items that tie in with a common food theme are merchandised at the pharmacy counter with signage encouraging shoppers to get more information from the pharmacist.

Another time, fiber-rich products like Fiber One bars and Cinnamon Burst Cheerios were featured — again with signage encouraging shoppers to start a dialogue with the pharmacist.

The initiative is part of an effort to position Piggly Wiggly as a health and wellness destination.

Scott Wink, Piggly Wiggly's pharmacy director, sends all store pharmacists informational materials and links to webmd.com so that they can educate themselves about the theme of the month.

Greg Brownlee, the pharmacist at Piggly Wiggly's Mount Pleasant, S.C., store, was unsure about the concept when it was first announced earlier this year. He initially thought that Piggly Wiggly expected pharmacists to try to sell products. But once the strategy was fully explained and subsequently rolled out, he embraced it.

“Until now, we didn't have much interaction with customers,” he said.

Thanks to the background information Wink sends him, Brownlee has become more educated about various health topics and feels like he's contributing more to his patients' overall health.

“It's been a learning experience because we often overlooked the food part of it,” he said. “We're bridging the gap between the two areas of the supermarket.”

JACKSONVILLE, Fla. — The melding of food and pharmacy is coming alive not only in retail merchandising, but also promotional activity.

At Winn-Dixie Stores, for instance, shoppers who use their loyalty card to get a seasonal flu vaccination for $24.99 receive five free grocery items.

Valued at $12.71, the free items are a three-pound bag of new crop Eastern Jonamac apples; a 64-ounce container of Minute Maid orange juice; an eight-ounce bottle of Top Care hand sanitizer; a 35-count package of Winn-Dixie disinfecting wipes; and a 65-count or 85-count box of Winn-Dixie facial tissues.

“In addition to receiving the discounted flu shot, our guests get five free grocery items specifically bundled to help protect them and their families during flu season,” John Fegan, Winn-Dixie's vice president of pharmacy, said in a statement. “The fresh fruit and orange juice provide a healthy start to the day and the hand sanitizer, wipes and tissues will help control the possible spread of germs.”

The deal is available to those who get a flu shot on a “walk-in” basis or by scheduling an appointment online at www.winndixie.com/pharmacy.

The “What a Deal” promotion launched Sept. 7 and runs through tomorrow.