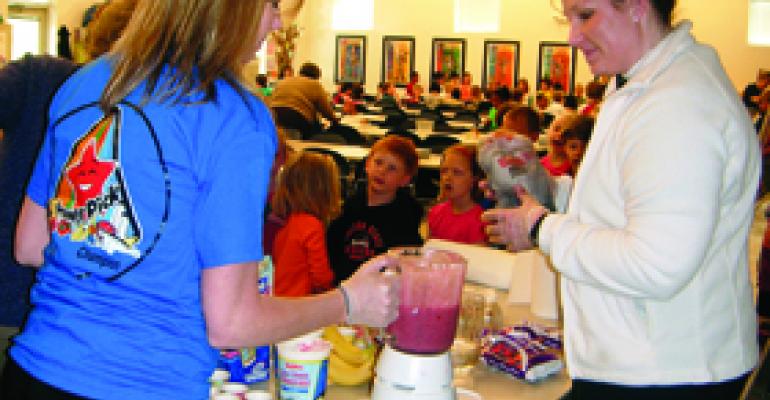 Anne Cundiff, one of Hy-Vee's 150 registered dietitians, is going back to school this fall. She won't be a student, though. Rather, her role is that of a health and wellness teacher to elementary school students. It's all part of Hy-Vee's involvement in the Healthy Schools Partnership, a school-based program that integrates a nutrition curriculum with physical education. Funded through a grant from

Anne Cundiff, one of Hy-Vee's 150 registered dietitians, is going back to school this fall.

She won't be a student, though. Rather, her role is that of a health and wellness teacher to elementary school students.

Through the HSP, registered dietitians teach students about healthy eating and living. Along with using dietitians who work in hospitals, gyms and other businesses, the HSP has heavy input from Cundiff and six other Hy-Vee RDs, as well as one Hen House Market RD.

Cundiff's role is to go into schools and give a 10-minute lesson about healthy eating.

“We teach them about the connection between performing well and eating well,” said Cundiff, who works at Hy-Vee's Fleur Drive store in Des Moines, Iowa.

After running in the pilot phase since 2007, the HSP will officially roll out this fall as part of a two-year longitudinal study of about 2,000 fourth- to sixth-grade students in eight schools in the greater Des Moines area and Kansas City, Mo.

The Center for Weight and Health at the University of California, Berkeley, will evaluate the impact of the curriculum on students' eating habits and physical activity.

During the pilot, students' eating behaviors were analyzed in a variety of ways, including before-and-after lunch tray photos and student journals.

HSP is still in the process of determining the exact measurements for the upcoming research study.

Cundiff was part of the pilot, and looks forward to the launch of the study, saying early intervention is critical in the fight against obesity.

“Kids are in desperate need for dietary help,” she said. “If we can catch them early, it will make a huge impact.”

During her classroom lessons, she discusses and gives out samples of healthy snacks like fruit kabobs with yogurt dip, smoothies, vegetable dip, frozen berries and whole-grain cereal. Hy-Vee donates all samples.

“The program has helped make children more excited about eating fruits and vegetables,” she said.

The curriculum has had a huge impact not only on students, but also school staff, said Rebecca Purifoy, a PE teacher at Pitcher Academy, an elementary school in the Kansas City, Missouri School District.

Purifoy's school cafeteria manager revamped the lunch menu as a result of the HSP pilot. The new menu was received so well that the district named the manager “Cafeteria Manager of the Year.”

Grades four to six were involved in the program's pilot, and will partake when the research study begins in the fall.

“My students enjoyed the information presented, activities in the cafeteria and especially the part when they got to fix snacks,” Purifoy told SN. “I did see a big gain in knowledge as the year progressed.”

What makes the HSP so effective is that it not only teaches kids about nutrition, but also physical activity. This is done through a variety of fun games in PE class, said Purifoy.

One game is a food relay race. Photos of various foods are placed on the floor. Kids race back and forth by grabbing a photo and placing it in the correct food group.

“Most of the intervention is done in PE class,” said Purifoy, who helped develop some of the games used in the HSP curriculum.

“Early on, we teach about Power Picks, which exist in all food groups,” she said.

To encourage students to eat Power Picks, HSP dietitians visit cafeterias and examine student lunch trays. If a student chooses a “Power Pick,” his/her photo is taken and put on a banner displayed in the school.

Physical activity is tracked via accelerometers, a high-tech version of a pedometer that not only counts steps, but also measures the intensity of steps.

To get parents involved, schools host a Family Fun Night, an outreach event designed to provide parents with the key messages that their children are learning. Parents attend food tastings and cooking lessons, and participate in some type of physical activity.

The involvement of the Hy-Vee and Hen House dietitians is an important factor in the success of the program, said Kathryn Thompson, head RD coach for the ADAF.

“Supermarket dietitians are able to take what kids are learning in the classroom and link it to the community,” she said. “It's a great way to reinforce the message.”

Since children heavily influence what their parents buy at food retailers, it makes sense to get supermarket involvement in the curriculum, she said.

“We're making children and their parents much better-educated consumers,” she said.