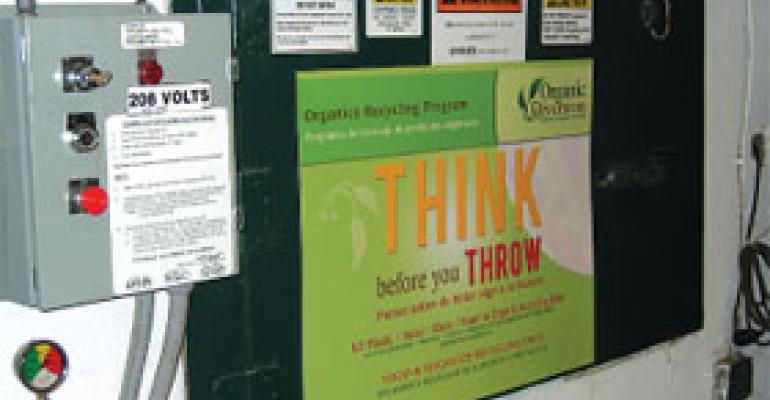 McCaffrey's Market Knows Recycling is good for the environment, as well as for the bottom line. Not only does the three-store chain segregate its trash for recycling, it now sells an all-natural fertilizer product made from its fresh food waste. We've always been actively involved in anything that benefits the community, and this is really an extension of that belief, said Jim McCaffrey, president

McCaffrey's Market Knows Recycling is good for the environment, as well as for the bottom line. Not only does the three-store chain segregate its trash for recycling, it now sells an all-natural fertilizer product made from its fresh food waste.

“We've always been actively involved in anything that benefits the community, and this is really an extension of that belief,” said Jim McCaffrey, president of the Langhorne, Pa.-based independent bearing the family name.

Just last month, McCaffrey's started selling Converted Organics fertilizer, an environmentally friendly brand made from biodegradable waste. This is no ordinary lawn product, however — the dry pellets inside each 20-pound bag were once meat trim, produce department culls and waxed corrugated boxes from the McCaffrey's Princeton, N.J., store.

The benefits for the retailer are threefold: Solid-waste costs are greatly reduced, there's goodwill generated in the community, and the store essentially gets to sell the very same fresh foods a second time, albeit in a different form.

“We'll be able to send about 8 tons a week to the compost center,” said McCaffrey. “That would keep about 90 tons a year out of the trash landfills,” at greatly reduced expense to the chain.

McCaffrey's developed the program working with Organic Diversion, a Marlton, N.J., firm formed earlier this year by Rocco D'Antonio, a veteran of the paper supply business. D'Antonio had worked for years supplying McCaffrey's with all its bags, packaging and trays as business development manager for the Jersey Penn Paper Co. He knew the retailer would be a good candidate for organic waste composting after he saw that the Princeton store alone recycled roughly 9 tons of plastic in 2008 — the equivalent of 1.2 million shopping bags.

“McCaffrey's gets it,” he said of the retailer's attitude about recycling and the environment. “Everything has not only taken hold, it's been growing.”

McCaffrey's was already recycling corrugated cardboard, as well as plastic. Yet everything else was being dumped into the solid-waste compactor and hauled away to landfills. That burdened the retailer with some hefty bills, since two of its three stores are located in Mercer County, N.J., which has the highest waste hauling fees of the state's 21 counties.

The biggest challenge to recycling organic waste inside the store was getting employees to change their behavior. Organic Diversion launched an intensive training program that explained the goal, the process and the importance of pre-sorting waste before it left the store.

“We start with management, then go one step down to the department managers, then we go to associates in a classroom-type setting,” said D'Antonio. “The last part of the training is to go into a department and touch everything, asking ‘Where does this go?’”

Helping to keep the program alive and top-of-mind with associates is a six-person store “Green Team,” recruited from various departments and made up of people whose interest in recycling and environmental causes extends beyond their jobs.

“It's a lifelong commitment with me. Even as a little kid, I couldn't stand it when people littered,” said Anthony Spenillo, produce manager at the Princeton McCaffrey's and leader of the Green Team. “I do my own landscaping and composting at home, so it was natural for me to bring it into work.”

Each department now has visual cues to remind store associates as they go about their duties. Deli, seafood, prepared foods, floral, the cheese counter and even the coffee station are outfitted with colorful posters and bins, one a regular trash can and the other an organic-waste receptacle with a lining.

“The goal is to make sure you're not changing work habits too dramatically,” noted D'Antonio. “You don't want to make someone have to walk across the room to throw something out. Everything is in close proximity.”

Signs on the bins are printed in several languages, primarily Spanish and English — though the store also has a bin printed in Mandarin and English, specially made for the store's sushi counter.

Produce is an exception to the bin rule. Officials anticipate that roughly 65% of the store's total organic waste will come from the department, which in Princeton measures about 1,600 square feet. So, instead of cluttering the back room with receptacles, store associates have been directed to use waxed corrugated cardboard boxes, which are also recyclable under the fertilizer program.

“I pointed out to them that the best way for my produce guys to do it is at their own tables, instead of bringing it all into the back and putting it into the receptacle like the other departments,” said Spenillo, adding that the department carries a shrink load of up to 4%.

“A lot of the stuff we pull is still really good,” he said. “It might have a nick in it or be a bit off-color, but it doesn't meet our standards, so out it goes.”

A significant portion of the culls is donated to local churches and food banks. Whatever is left over goes into the organic composter located in the back of the store. Organic Diversion arranged for one of the two conventional composters to be pulled out and replaced with a self-contained organic system. The firm supplied all the materials, including the 30-cubic-yard bin.

“This is part of our program. We install it, and when we come to pick it up, we drop a new one in so the store is never without a compactor,” said D'Antonio. “The bins will hold anywhere from 6 to 9 tons when it's picked up.”

The waste is carted to Converted Organics, a Boston-based composting company that leases 60,000 square feet inside the Bayshore Recycling campus in Keasbey, N.J., due east of Princeton. The waste is tipped onto the floor, checked for inorganic elements, and then sent into a macerator that acts like a giant Cuisinart food processor. The resulting slurry is poured into a digestor, where beneficial microbes go to work.

“The whole process is controlled by temperature, because we need to get to 130, 150, 160 degrees, depending on the material that goes in,” said Jack Walsdorf, vice president of waste management at Converted Organics. “We need to reach a threshold temperature in order to eliminate all pathogens, like E. coli and salmonella, from the mix. It's a very important step.”

The resulting substance is full of beneficial microbes. The solids are squeezed to extract the liquid, which goes to professional landscapers, while the granular end product goes to the retail market.

“The attraction to the retail market is the fact that this is non-chemical,” noted Walsdorf. “You can put it on and send out your kids and puppies immediately. No 72-hour waiting period, no hazmat suit or respirators to apply it, and it's safe to the water's edge.”

Even if McCaffrey's chose not to sell the fertilizer — many retailers participating in similar programs do not — the business still benefits from paying tipping fees that are significantly lower than those charged for solid waste.

“We discount our fees, because we want a clean waste stream of organic material that's source-separated,” said Walsdorf. “We compensate the supplier of the waste for doing the separating for us.”

McCaffrey estimates the organic composting program will save the Princeton store up to $20,000 a year, while incurring minimal costs.

“Our costs are small — some from advertising and promoting the program, and additional costs related to labor delegated to the implementation,” he said. “There will also be an ongoing cost of labor to use the program.”

Materials eligible for recycling: Primarily food waste and waxed corrugated cardboard, but anything that's not plastic, metal or glass

Projected reduction of waste: Approximately 8 tons a week to the compost center; or about 90 tons a year that would otherwise go to trash landfills.

Not every retailer needs to make compost. A ShopRite supermarket in New London, Conn., has begun donating 50 to 75 pounds of bruised or overripe produce every week to the Mystic Aquarium & Institute for Exploration in nearby Mystic, where it's fed to resident fish and invertebrates. The donated produce, which is unappealing to consumers but still nutritious, is expected to save the aquarium approximately $16,000 in feed costs each year. In turn, the store — a member of Wakefern Food Corp., one of the nation's largest supermarket cooperatives — reduces its waste stream and saves money in dumpster transportation fees.