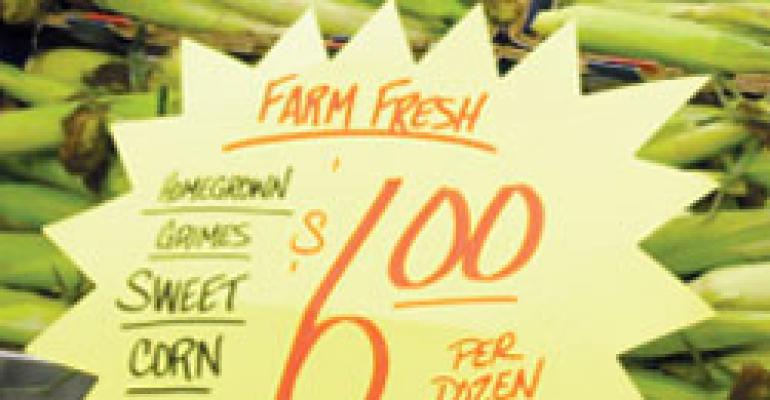 RESISTANCE IS FUTILE in the summertime produce department. Pyramids of white stone fruit, bins of striped melons and clusters of tomatoes on the vine beg to be purchased. Consumers aren't alone in their love of fresh summer fruits and vegetables; retailers love them too, for summer is a time when sales easily top $500 million a week, according to the Perishables Group. Soon, we'll be getting peaches, nectarines, plums nad all those great varieties

RESISTANCE IS FUTILE in the summertime produce department. Pyramids of white stone fruit, bins of striped melons and clusters of tomatoes on the vine beg to be purchased. Consumers aren't alone in their love of fresh summer fruits and vegetables; retailers love them too, for summer is a time when sales easily top $500 million a week, according to the Perishables Group.

“Soon, we'll be getting peaches, nectarines, plums and all those great varieties that have been coming out these past few years, like dinosaur eggs and pluots and the white peaches and nectarines,” said Scott Theisen, produce manager at Blue Goose Market, St. Charles, Ind. “It's really easy to fill your space.”

Like all produce managers, Theisen is already well into planning for this summer. The single-store independent is just now shifting into spring with asparagus and strawberries.

“Strawberry volume is up and prices are dropping, so that sets us up for a good transition into summer,” he said. “Asparagus and strawberries are the two slam-dunk sale items you can put on ad and they're the biggest demand items for a while.”

The summer preparations are also under way at W. Lee Flowers & Co., based in Lake City, S.C. The company operates or supplies more than 90 IGA and independent supermarkets in the Carolinas and Georgia. Cecil Spurlock, the chain's director of produce, is focusing on slightly different favorites to kick off the season.

“We'll really start in late April, though we already have watermelons,” he said. “The average is 16 pounds, they're seedless and we're offering them at $6.99. We did this last year, starting with melons cheaper than anyone else around.”

The produce category could use a good summer. The most recent report from the United Fresh Produce Association found that sales volume in the fourth quarter of 2008 fell 3.6% compared with the same period a year earlier. Sales per store were up 2.3% during that time, but researchers determined that number was due mostly to a 6.1% increase in retail prices. Most experts point to the recession as the primary reason for the fall-off. In South Carolina, unemployment rates are the second highest in the nation, behind only Michigan. In an effort to boost sales of local products, the South Carolina Department of Agriculture has ramped up its “Certified South Carolina” program, introduced only two years ago.

“The South Carolina state program has been awesome this past year,” said Spurlock. “They put together a program that would reimburse some of our advertising costs and they did a helluva good job. They've done tremendous work for our local peaches and watermelons.”

Those two produce items in particular are going to be at the center of several 2009 summer promotions at Spurlock's IGA's. For one, select stores will play host to royalty: the state's reigning Watermelon Queen and Peach Queen.

“When you can get people together in these kinds of times, in an atmosphere that's open, wholesome and points towards food and fun, those become very viable ways of stimulating people's buying habits,” noted Sonny Dickinson, assistant director of marketing and retail merchandising coordinator for the SCDA.

Another strategy increasingly employed by produce departments during the warmer months is making sure there is an emphasis on local produce. At Blue Goose, that means stocking plenty of tomatoes and sweet corn, virtually all of which come from a single farm located about 30 miles from the store, in Huntley, Ill.

“We've been in the produce business so long and we have a great connection with a farmer out west of us, who grows the most unbelievable sweet corn,” said Theisen. “It's our version of the ‘World's Best’ and he does all kinds of vegetables for us.”

The farm, Tom's Farm Market and Greenhouses, also provides Blue Goose with musk melons, asparagus, peppers and hard-shell squash, along with bedding flowers (and pumpkins in the fall). Owner Tom Halat has been farming the land since the early 1960s and over the years has built a close relationship with the store, even though his farm sells the same items from its own roadside market.

“We don't slip anything to Blue Goose that we wouldn't sell ourselves,” Halat said. “We sell what we grow, and our philosophy is also to have the freshest and the best for our retail customers, too.”

After more than 40 years as a supplier, Tom's is well-known among regular Blue Goose customers, who have come to anticipate the arrival of certain items. Theisen works with the store's general manager, Dale Instefjord, to make sure the weekly fliers tease upcoming arrivals.

“I'll go to Dale and tell him to put in a reminder that ‘Tom's corn is coming’ or ‘Tom's tomatoes are coming’ and we'll do a countdown in the department with signs,” he said. “Tom grows a tomato that we just can't keep in the store. It's got an outstanding backyard flavor, and they only have them about three weeks every summer.”

In the Southeast, customers at the IGA stores managed by Spurlock are just as passionate about the huge Jubilee watermelons shipped to the Flowers warehouse by a local farmer.

“We take about as much as he can give us. We sell a lot of melons, and we sell big melons, up in the 30-pound range — they're tough on the back,” Spurlock said.

Another variety that consumers are becoming reacquainted with is a native strain known as the Charleston Grey, a long watermelon with a solid, light green rind.

Organic produce continues to be a popular seller, even during the summer months, when seasonal volumes typically make conventional prices ultra-competitive. Theisen said that organic sales have slipped a bit since the recession, and as a result, the original 12-foot section devoted to organics in his store has been reduced.

“We've seen sales take quite a tumble,” he said. “The section is down to 8 feet right now, at least until things pick back up.”

In hard-hit South Carolina and neighboring states, organics are still viewed by many as specialty items. Spurlock said organic produce sections were added to 11 stores just last year. Results have been mixed, depending on location, but he noted the category is here to stay.

“We chose nine or 10 items we thought would be regular sellers. We do apples, carrots, some oranges, pears, radishes, celery and leaf lettuce, and we try to mix it up a little bit to keep the interest up.”

South Carolina retailers are learning about new varieties of local products, organic and conventional, through programs like Certified SC. Martin Eubanks, director of marketing in the SCDA's Agricultural Services Division, said the retail program is part of a $1.5 million initiative that also includes a foodservice component and a service that links consumers directly to farmers.

“All of these retailers have had local-grown programs of one kind or another, and they've had them for years,” he noted. “We don't see our SC-grown program as overshadowing those efforts; we only want to enhance them.”

Making the produce department more visible during the peak season is one way retailers sell more produce. Spurlock is planning to move his best items outdoors a few times for a farmers' market-type sale.

“When corn hits good, we'll have corn, melons, cantaloupes and green beans,” he said. “We'll get the big sellers and get the margins down to where we can move volume.”