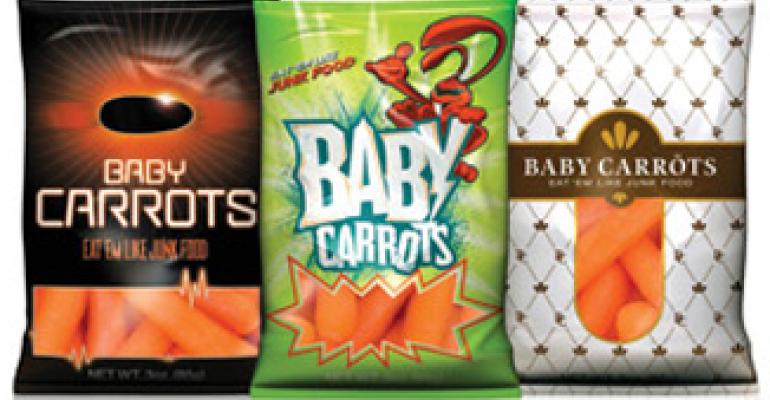 PRETTY COLORS ASIDE, the produce department isn't really designed for kids. With all the focus on childhood obesity these days, however, retailers have learned to get downright playful with packaged snacks that market fun without compromising on nutrition. Kids could certainly use some motivating. According to a recent study commissioned by the Produce for Better Health Foundation, only 6% of Americans

PRETTY COLORS ASIDE, the produce department isn't really designed for kids. With all the focus on childhood obesity these days, however, retailers have learned to get downright playful with packaged snacks that market fun without compromising on nutrition.

Kids could certainly use some motivating. According to a recent study commissioned by the Produce for Better Health Foundation, only 6% of Americans eat the recommended amount of vegetables each day, and only 8% reach the threshhold of fruit. Children between 2 and 12 years old have increased their consumption 5% since 2004, but that growth is overshadowed by the 72% increase in childhood obesity, according to the Centers for Disease Control and Prevention. That's one out of every seven children.

To drum up interest, supermarkets that already stock an assortment of nuts, dressings and non-perishable items in their produce sections have added snacks like freeze-dried fruit packs and all-natural juice boxes. Mike Oliver, produce manager at Pennington Quality Market, Pennington, N.J., said there's been an uptick in sales of these and other lunchbox-sized produce packs he stocks.

“Moms are coming in and picking up more of the small packages of produce for their kids,” said Oliver. “They're really thinking healthy right now, and they seem to be more aware of this whole childhood obesity issue.”

Companies looking to ride this healthy wave include Disney Consumer Products, the branding arm of the well-known corporation, which recently announced it would extend the use of characters like Mickey Mouse, Donald Duck, Goofy and others to more packaged produce companies. DCP, which launched branded produce snacks exclusively with Kroger Co. in 2007, currently partners with Crunch Pak, Church Brothers and several other produce manufacturers, and since 2006 has only allowed its characters and logo to appear on healthy products that meet specific criteria for sugar, calories and saturated fat.

Companies like Funky Monkey and Crispy Green, meanwhile, offer produce with a twist.

“Kids see the product and say, ‘Oh, that's astronaut food,’” said Crispy Green CEO Angela Liu about the packets of freeze-dried fruit her company sells. Since 2004, Crispy Green has offered shelf-stable slices of apples, bananas, pineapples and other fruits in distinctive silver pouches. Two years ago, it added 100-calorie versions with a small amount of added sugar to appeal to kids.

Try as they might, though, companies will always come up against picky eating habits and less-than-stellar parenting. Leah McGrath, dietitian at Ingles Markets, Asheville, N.C., frequently advises customers on how to introduce more produce into their children's diet.

“Kids' palates can be pretty limited,” she said. “They're not exposed to a lot of the different fruits and vegetables they need.”

There's also the junk food market to contend with, which offers more inviting flavors and spends millions more on marketing and advertising each year. According to a recent survey by the YMCA, 62% of parents with children ages 5 to 10 say they let their kids eat junk food one to four days every week. Only 14% say their kids get the recommended amount of fruits and vegetables every day.

The greatest challenge facing produce snack companies, then, is marketing — whether to employ eye-catching packaging and advertising on par with junk food companies, or take the more toned-down approach that many consumers associate with healthy products.

Bolthouse Farms, one of the country's largest packaged produce companies, has decided on the first approach. Last year, it launched a new line of packaging for its baby carrots that mimicked the colorful, edgy designs found on bags of Doritos and other snacks popular with kids. The new motto: Eat 'em like junk food.

“While the functional benefits of carrots are well known, we found we had lost our relevance,” said Brian Reese, Bolt-house's head of marketing. “We're not as fun, we're not as top of mind in the world of snacking because the junk food manufacturers spend hundreds of millions of dollars every year communicating with consumers. Our campaign is designed to unapologetically reinsert ourselves into the snacking occasion.”

Bolthouse's new carrot packaging is currently undergoing a trial run at select retailers, with hopes of eventually expanding to a nationwide rollout. Supporting the effort is an equally hip promotional campaign, including social media, tie-ins with kid-friendly movies like “Hop,” and an online video game.

“It's quite edgy and different from anything else we're seeing,” said Elizabeth Pivonka, president of the Produce for Better Health Foundation.

Research seems to support this notion that, with kids, it's all about the packaging. A 2007 study that appeared in the journal Archives of Pediatrics and Adolescent Medicine found that children ages 3 to 5, when presented with food in a plain package and in a McDonald's package, preferred the McDonald's option on average. They also thought the food tasted better in McDonald's wrappers.

No other company is going for the in-your-face appeal of Bolthouse's new packaging, but retailers are finding success with produce snacks that feature cartoon characters and other colorful graphics on-pack. Pennington Quality Market stocks Cool Cuts by Ready Pac, a line of pre-cut vegetables packaged with either peanut butter or ranch dipping sauce. Packages feature the cartoon vegetables wearing sunglasses and playing sports like surfing, biking and skateboarding.

“A lot of companies have gone the route of merchandising their products with movie or cartoon characters,” said Oliver. “It really helps target kids and move the product along.”

To educate kids and get them interested in the produce department, experts recommend offering samples and coupons — anything to get them trying the product.

“If you want to increase sales in the produce department, let people try the product, including children,” said Pivonka. “Some retailers have also done club cards for kids, so the kids get a reward after they've eaten so many fruits and vegetables.”

Sampling and loyalty programs can be expensive, however, so many retailers opt to do store tours for school groups that let kids identify items and taste them. For supermarkets like Ingles, the hope is to remove the “ewww” factor.

“With kids, it's all about getting them to sample new things, getting them to try things in a different way,” said McGrath, Ingles' dietitian. “Hopefully, when they go home they'll tell their parents about it, and when they're in the supermarket they'll ask to get some of those same produce items they tried on the tour.”

Ultimately, it's the parents retailers must win over. So while colorful packaging and fun flavors that strike a compromise between health and indulgence are nice, the practicality factor might be the most important. Parents want to know if it will save time, save money and fit conveniently in their kid's lunchbox.

“A lot of moms out there say they need help preparing vegetables for their kids, and so these packaged snacks have the potential to be very helpful,” said Pivonka.

It's also important to remember, noted Pivonka, that today's kids will be tomorrow's parents, and that it's worthwhile to entice kids into the produce section so that they'll keep coming back in the years ahead.

The national agenda is swinging toward healthier meals for kids, and the food industry wants to keep pace. In December, the Senate passed a $4.5 billion bill aimed at making healthier school breakfasts and lunches available to more children. Under the legislation, the U.S. Department of Agriculture will develop new nutritional criteria for meals, and those school districts that meet it will receive a 6-cent increase to their federal reimbursement rate. The bill also expands free meals to more than 115,000 low-income students and invests $40 million in a “farm to school” program that will encourage schools to buy from local farmers.

Supermarkets like Whole Foods Market are throwing their weight behind the movement. Last year, the Austin, Texas-based retailer ran a campaign to put salad bars in 300 schools nationwide. Customers donated more than $1 million, exceeding the company's goal. There have also been blogs, recipes, video contests and in-store promotions asking consumers to join the “school lunch revolution.”

Produce snacks offer a healthy packaged solution for parents, but supermarkets also want to help the do-it-yourself types out there. For them, retailers like Farm Fresh Food & Pharmacy and Martin's offer online videos and recipes that make fun dishes out of simple ingredients. Farm Fresh, a Supervalu banner, and its corporate dietitian, Jennifer Shea, recently developed a lineup of healthy snack ideas for children, including vegetable “dippers” using cut celery, carrots and a bowl of yogurt. Ahold USA-owned Martin's, meanwhile, features more than a dozen kids' snack recipes on its website, including “Apple lady bugs” made from halved apples, peanut butter and raisins.

“We had the kids doing a lot of the preparation so it was hands-on,” said McGrath. “When they're having fun and they're with their peers, they can be very receptive to new things.”