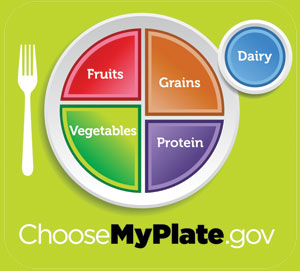 Since its unveiling last summer, the Department of Agriculture’s MyPlate logo has been hailed as a refreshing overhaul of its confounding predecessor, the food pyramid. Organized into four portions of a plate — fruits, vegetables, grains and protein — with a fifth, dairy, represented as the circular outline of a drinking glass, the new visual aims to be everything the pyramid wasn’t: simple, actionable and easy on the eyes. Health experts applaud it, as does much of the food industry. Some have called it a breakthrough in nutrition education.

But for all its acclaim, the colorful MyPlate belies a frustrating truth — that in a nation of ever-expanding waistlines, MOST consumers eat according to the plate a mere seven days out of the year, according to a survey by the NPD Group.

Supermarkets haven’t been deterred from incorporating MyPlate into their wellness platforms. San Antonio-based H.E. Butt Grocery Co. recently rolled out a program called “Healthy at H-E-B” that uses MyPlate as a centerpiece. The chain’s corporate wellness coach, Suzanne Parker, admits that MyPlate’s suggestion that half of a person’s diet be fruits and vegetables, the other half grains and protein, is ambitious. But Parker believes the value of MyPlate is in its overall message, not its details.

“I think we can set a realistic goal of helping people understand portion control, and this is a great tool to do that,” she said.

Retailers are using MyPlate in any number of ways. Bi-Lo introduced color-coded shelf tags that correspond to MyPlate’s recommendations. Schnuck Markets ran a promotion that asked customers to send in pictures of kid-friendly meals that followed MyPlate’s guidelines. The USDA itself has promoted the logo with a contest that asked people to submit clips of themselves talking or singing about the virtues of MyPlate.

There’s certainly a lot of interest to build upon. A study by the communications firm M Booth found that 46% of Americans are aware of the MyPlate guidelines, and 60% of that group says they’d like to follow them or have planned to do so.

“Time will tell if it will have an effect on the way consumers eat, but it’s likely to be an uphill battle,” said Darren Seifer, an NPD food and beverage analyst.

The whole health industry can expect an uphill battle on key funding issues this election year.

With the Farm Bill up for renewal this fall, natural and organic interests have renewed their push for funding increases for sustainable agriculture. But at a time when Congress leans toward fiscal conservatism and voters are calling for decreased spending, a revolution seems unlikely. In fact, President Obama in his fiscal year 2013 budget called for subsidy cuts across the board, part of the $32 billion he’d like to see taken out of the bill. This comes in addition to $23 billion in cuts recommended by a deficit reduction super-committee last fall, some of which targets organics.

Belt tightening isn’t a universal theme, however. The Obama administration has also asked for a sizable 17% increase in funding to the Food and Drug Administration. That should please companies and industry associations, who have called for improved oversight from the agency in the wake of numerous recalls and outbreaks over the past few years. What might not go over so well: the request that the majority of that funding come from increased fees on companies the FDA oversees. 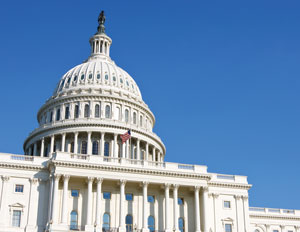 The supermarket industry is among the biggest retail users of power in the United States. As such, it’s also among the largest supporters of clean energy. Retailers have installed solar panels, air curtains, LED lighting and a host of other systems in an effort to reduce costs and the impact stores have on the environment.

“We are in a fierce global race to capture this market,” he testified.

Indeed, Asia has emerged as a major threat to the solar power industry, which has seen prices drop 50% over the past few years. Some observers see the government’s investments as the only way to keep the U.S. green tech sector competitive for now.

“Some of these technologies may not be proven yet, but there’s a clearly understood need to try to change the way we use energy,” said Jeffery Born, a professor in the College of Business Administration at Northeastern University.

Like any emerging industry, green power is high-risk by nature. But stakeholders note that early government support is already helping some segments stabilize.

“Our costs have dropped by more than half,” said Dan Berwick, director of policy and business development for Borrego Solar Systems, San Diego. “The gap that has to be covered by federal or state support is much smaller now.”

What retailers can hope for is that, no matter who’s running the country, continued government investment will yield something of tremendous value.

“The return on that could end up covering all the losses in other areas,” said Born.

Ever sensitive to public opinion, retailers have taken steps to ensure their protein suppliers adhere to animal welfare regulations as well as their own code of ethics — but abuses continue. Wal-Mart Stores found that out in January when the Humane Society of the United States released undercover video depicting abusive workers at one of the retailer’s pork suppliers.

The case demonstrates that stringent purchasing policies imposed by retailers alone may not be enough to protect them from this guilt by association. A range of bills designed to thwart such covert efforts was considered by four state legislatures last year, and additional states are taking up the issue in 2012. Food retailers have been quiet on these so-called “ag gag” bills, even though they potentially have the most to lose, as Wal-Mart recently discovered.

“If there are food safety concerns, this will make it much more difficult to find out about them in the first place,” said HSUS spokesperson Paul Shapiro. “That can pose a very negative reputational hazard for retailers.”

Some bills outright ban photography in facilities or on farms, while others makes it a crime to lie on a job application at any agricultural facility.

London-based Tesco impressed the entire food industry in 2007 when it pledged to affix all 70,000 of its products with a carbon footprint label. The ambitious plan was hailed as a new environmentally sensitive means for consumers to choose the best products, and an inspired way for companies to conduct business.

Earlier this month, Tesco announced it was dropping the plan, blaming the enormity of the task, as well as other retailers for failing to adopt similar goals.

The world’s fourth-largest supermarket company said it is looking at other ways it can educate customers about the carbon impact of various products like carbonated beverages and paper towels.

Customers of H.E. Butt Grocery Co. were dancing in the aisles earlier this month, and it wasn’t because of a sale. More than 25,000 shoppers and employees swayed, clapped and kicked along with the “Cupid Shuffle” at stores across Texas during the four-minute long flash mob to celebrate American Heart Month, as well as the retailer’s new wellness platform, “Healthy at H-E-B.”

After the dance, store leaders invited customers to stick around and learn more about the program and the company’s new health screening services. Numerous stores also uploaded video of their dance scenes, though none have gone viral as of yet.