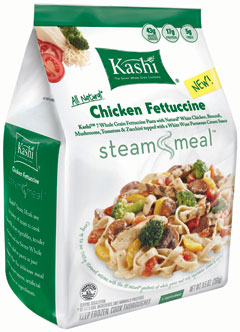 Stouffer’s promises its innovative Steam Perfect Bag protects the flavor and nutrition of the vegetables and other premium ingredients in the company’s new Farmers’ Harvest line of steam meals-for-one.

Kellogg’s-owned Kashi also uses steam as the cooking method for the four new varieties of steam meals that hit the market in late January. All of the dinners are built around Kashi’s signature “Seven Whole Grain blend.”

With such national exposure, it’s likely consumers will become more amenable to steaming their meals, which isn’t a bad thing, according to diet experts.

“It’s a better way to cook because you’re not adding fats to the process, and you’re preserving the nutrients, especially with vegetables,” said Michelle Mix, a registered dietitian and nutrition coordinator at Hannaford Bros., Scarborough, Maine.

Birds Eye pioneered the modern steam cooking category when the frozen vegetable packer introduced its Steamfresh line of vegetables, blends and corn on the cob in 2006. Since then, the brand has grown to include rice blends and pre-sauced vegetables.

Despite the health aspects, steaming has a much more practical side as well.

“The biggest driver to me is the convenience of using your microwave, which is what these products allow you to do,” noted Kara Nielsen, trendologist at the Center for Culinary Development, San Francisco. “The technology is very smart because people don’t even have to get a bowl to put the bag in. They can simply throw it into the microwave.”

At Hannaford, Mix says her clientele isn’t always familiar with steaming and requires a bit of education. She urges them to buy a steam basket but tells them it’s as simple as putting a small amount of water in a pot.

“I tell them that if you boil vegetables, the nutrients leach into the water and you’re essentially throwing away most of the vitamins and minerals that are good for you,” she said.

Nielsen believes the timing is right for steam cooking to become more popular. The continued preference for home cooking and the desire for better diets are two factors that motivate the trend. Steaming can also help manufacturers reformulate their recipes. Refrigerated and frozen entrees often are notorious for their high fat and sodium contents.

“We’re seeing the sophistication of food that goes into the microwave that’s super-convenient, and it also feels fresher,” she said.

Hobbled by the recession and threatened by those big-box stores out by the highway, local food purveyors have been searching for ways to get the communities they serve to patronize their aisles.

They’re about to get mobbed.

“What we need to be doing is spending our money locally so that it stays local and enriches the people in the community,” said Andrew Samtoy, a Cleveland attorney who helped create a new take on the flash mob phenomenon that swaps cash for the flash.

Samtoy developed his “cash mob” idea during a civic association retreat last summer and wasted no time trying it out with his cohorts at a local shop owned by a friend.

“I thought it would be amazing if all 62 of us on the retreat showed up at her store and spent $20 each,” he recalled. “That $1,200 wouldn’t change her business, but it would at least give her a big infusion of cash right then.”

With that initial success, Samtoy helped establish a blog (cashmobs.wordpress.com), Facebook page, Twitter feed (@Cashmobs) and email address to assist others interested in setting up their own cash mob parties. Mobs have helped stores in cities as large as Los Angeles and as small as Muskegon, Mich.

“Getting people in the door is the key,” Jennifer Cross, owner of an antique and furniture store that was recently mobbed, told the Muskegon Chronicle. “I saw a lot of new faces in here today.”

Locally owned businesses that have been mobbed include bookshops, variety stores, restaurants, toy stores and, yes, food stores. The emphasis is on local businesses more than local products, but the two often go together, Samtoy noted.

“It’s impossible for us to get locally made contact lens solution, but what we can do is buy it from businesses in the community that benefits the community,” he said.

Energy for All: Energy Drinks

Consumers of Kraft Foods’ new Mio Energy line of water enhancers may not like snowboarding or mountain biking, but their purchase is energizing a red-hot beverage category.

Seeing an opportunity to expand beyond the core audience of young adult males, manufacturers of traditional drinks are infusing their brands with an extra boost. In addition to Mio Energy, brands like V8, Crystal Light and Celestial Seasonings now come in energy varieties. Lesser-known brands and even private labels like Wal-Mart’s Great Value are getting in on the act, too.

“I think what defines a lot of these products is they’re not perceived as energy drinks per se,” said Tom Vierhile, director of innovation insights with research firm Datamonitor. “They may be powdered beverages, soft drinks or juices that have energy as a side benefit.”

By softening the energy theme, a wider range of companies hope to reach women, Baby Boomers and other consumers who are turned off by the Red Bulls and Monsters that currently dominate the category. To that end, they’ve incorporated all-natural ingredients, vitamins and fruit extracts into their drinks. V8 Fusion+Energy advertises B vitamins and “natural energy from green tea,” while Nestlé’s Jamba All Natural Energy Drinks play up the use of real fruit.

They’re also marketing a less amped-up experience. Crystal Light On The Go Energy, for one, takes a practical approach by targeting busy women who need a little extra momentum to get through their day.

In addition to courting new tastes, these energy offshoots also address concerns that many consumers have with ingesting high levels of caffeine, sugar and supplements. Medical experts have warned against imbibing too many energy drinks, and the banning of alcoholic energy drinks like Four Loko seems to have confirmed those fears.

“Many of these products, like Crystal Light, are a little less aggressive on the energy benefits, so consumers don’t have to worry about the product causing some sort of health issue,” said Vierhile.

Meanwhile, energy drink companies, which account for more than $9 billion in annual sales, hope to expand their appeal while still keeping their edge. Red Bull offers a sugar-free alternative, and marketers have begun targeting coffee-swigging young professionals with drinks like the wildly popular 5-hour Energy shot.

“The trick is to broaden the appeal of the category but not lose the current following,” wrote Euromonitor analyst Richard Heffner in a recent report.

There’s also the possibility of the appeal working the other way — that by introducing energy lines, many feel-good brands could gain a bit of attitude. That’s what Celestial Seasonings seems to be after with its new kombucha shots, which advertise “an all-natural way to keep up the pace.”

Superfruits Go Back to Basics

Globetrotters in the business of tracking down the next big superfruit are circling back to some traditional, homegrown favorites.

The top choices going into antioxidant-based products these days are simple cherries, cranberries and blueberries. The Cherry Marketing Institute notes that tart cherries rank 14th out of the Top 50 foods with the highest antioxidant content. Ocean Spray — known for its cranberry drinks — recently released a line of cherry-flavored juices, and other companies are including the tree fruit in new products.

Increased production costs are partially to blame for the switch, though it seems shoppers have grown tired of trying to keep up with the latest exotic berry, notes market research firm Mintel.

As a result, consumers can expect fewer products containing pomegranates, once the darling of the beverage world and the No. 1 most-used flavor in 2008 and 2009. According to Beverage Digest’s annual new product survey, it fell to No. 18 last year. It’s been the same story for yuzu, goji berries and other exotic, antioxidant-rich fruits.

“They’re plumper and moister than most other dried fruits, so they offer greater appeal to our customers,” he said.