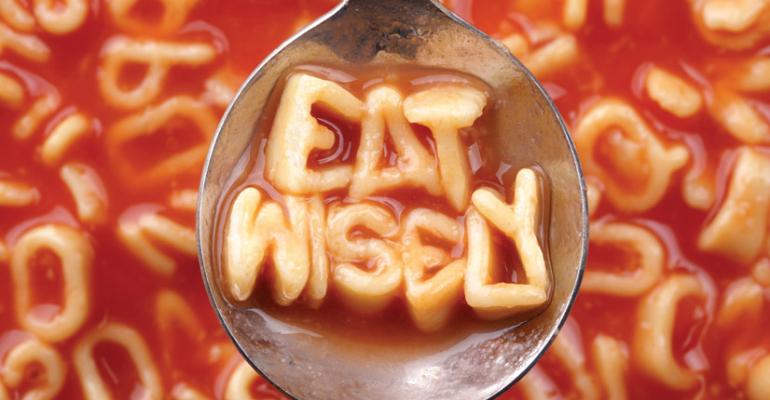 Up front or on pack &mdash; nutrition labels, panels and logos are about to become much more prominent.

In 2011, the University of California at Berkeley co-sponsored a contest that invited entrants to develop a user-friendly alternative to the sterile-looking, numbers-heavy box known as the Nutrition Facts panel.

The competition was inspired by current events. At that time, the Food and Drug Administration was reviewing the panel, and had asked the Institute of Medicine to recommend ways the agency could modernize the way nutrition information was presented to consumers.

The IOM’s final report, issued the same year, called for “a fundamental shift in strategy,” from presenting nutrition data with no context to a system that “encourages healthier food choices through simplicity, visual clarity and the ability to convey meaning without written information.”

Like the UC Berkeley contest, the challenge of standardizing a food labeling system has attracted a wide number proposals from food industry stakeholders. Some are more interested in single issues such as gluten, while others want to make a lasting contribution to the nation’s collective health with wide-ranging nutrition rating systems.

As a result, food and beverages today sport any number of individual or summary labels highlighting everything from fair trade status to calcium content. In the middle of this revolution, government regulators, trade associations, consumer advocacy groups and the private sector run the risk of alienating the very group they are trying to help: The consumer.

“It’s awfully complicated,” said Michael Jacobson, executive director of the Center for Science in the Public Interest. “It’ll be interesting to find out what works and doesn’t work.”

Start at the Back

All nutrition information that appears on food products springs from the panel on the back known as Nutrition Facts. The data box was introduced in 1992 and all stakeholders agree that, after 20 years, it’s due for a major overhaul.

“There are 30 numbers or so, and it becomes very hard to weigh low fat against high vitamin C against no trans fats against high saturated fats,” said Jacobson. “There’s a lot to juggle for anyone who’s not a nutritionist.”

The IOM found the data suffers from a lack of context, and statistics agree. A 2010 study from the International Food Information Council found that a mere 12% of Americans accurately estimate their intake of calories, the single most important component of nutrition.

“People don’t know how many calories they need in a day [even though] they still look at calorie information,” said Wendy Reinhardt Kapsak, senior director of health and wellness for IFIC.

The implications were significant: Consumers did not know how to incorporate calorie information into their diets. Yet, they continually showed a deepening interested about food. The rise of obesity, allergies, diabetes and a host of other food-related issues has created a groundswell of demand for information that is understandable, convenient and, most of all, simple to understand.

In other words, everything the Nutrition Facts panel is not.

“Consumer concerns about the source of their food is meeting up with public health issues,” observed Beth Johnson, president of Food Directions, a Washington-based government relations firm specializing in food policy. “Labeling is the best, most straightforward way to address all of them.”

Comprehending the Nutrition Facts panel in a new way is what made the UC Berkeley contest so intriguing. More than 50 entries were received. The winning label by visual designer Renee Walker was built around various-sized colored blocks. The color of the block distinguished individual ingredients, while size related to the amount of the ingredient in the finished product.

The judges noted that each entry had benefits, but none was perfect. Walker herself noted that something as basic as her tinted boxes could prove problematic for certain segments of the population.

“It would take more time, expert advising, and work on addressing cognitive recognition issues such as color blindness,” Walker wrote in her blog. “No one person has the answer.”

No one label has all the answers, either. Shoppers walking down a supermarket aisle today can find any number of badges and logos that help them make a purchase decision based on health or lifestyle. Numerous non-government organizations now offer certification programs for whole grains (the Whole Grains Council), gluten-free (the Gluten Intolerance Group), sustainable seafood (Marine Stewardship Council and others), fair trade (Fair Trade USA) and natural cosmetics and home care items (Natural Products Association), to name just a few.

Those single-issue verticals satisfy some of the consumer demand for information, but the broader nutrition question has been left to those in the industry with a greater reach — namely retailers and manufacturers.

The retail segment of the industry has developed nutrition rating systems: Hannaford introduced Guiding Stars in 2006, followed by Topco Associates’ NuVal a year later. Some chains like Wal-Mart developed their own nutrition guidance. 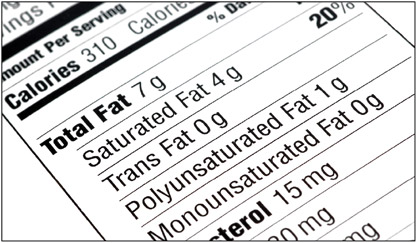 “Many of the supermarket programs are proprietary marketing schemes,” said Jacobson. “They all promote them to demonstrate they’re doing something for their customers’ health.”

Not to be outdone, food processors developed virtual toolkits on their websites and digital platforms to help consumers create healthful meals. Most recently, Nestlé Foods unveiled Balance Your Plate with Nestlé, a national nutrition education program based on USDA’s MyPlate recommendations.

“They’re all ways the retailer and the manufacturer are trying to get helpful and accurate information out there to their customers,” said Johnson, who worked at FDA prior to going into consulting. “Conversely, the consumer is looking to make sure that they can make informed and quick decision at the point of purchase.”

The Holy Grail, however, is putting nutrition guidance right on the front of packages, where purchasing influence can be maximized. The IOM’s recommendation to the FDA included a simplified calorie listing, accompanied by a three-point system that evaluates fats, sodium and added sugars. Regulators are reviewing the finding and have stated they hope to issue a draft proposal by the end of the year.

In the nearly two years since the IOM report, the marketplace continues to accumulate nutrition labeling, certification logos and other guidance. By far the most aggressive push to implement a front-of-pack system comes from the two largest trade groups in the food industry, the Grocery Manufacturers Association and the Food Marketing Institute.

Their program, known as Facts Up Front, is way ahead of the government’s, having just added a comprehensive online component that explains how it works.

“It is, and will be, a ubiquitous program, and the only standardized front-of-pack nutrition labeling program,” said Sean McBride, executive vice president of communications and membership services, GMA, noting that in some categories, the adoption rate is almost 90%.

Fight for the Front

“I find it amusing that the IOM report has been all but ignored,” said Marion Nestle, a professor of food policy and author known for exposing double standards and contradictions on food labels. “It seems to have been preempted by Facts Up Front.”

The IOM report recommended listing only negatives on the front of packages, namely fats, sodium and added sugars. By comparison, Facts Up Front lists saturated fat, sodium and total sugars, as well as the option for manufacturers to promote up to two positive attributes, such as fiber or specific vitamins.

Nestle thinks the added tabs will only confuse consumers. Her 2002 book “Food Politics” charged corporations with using overt and covert tactics to influence nutrition policy and further their business objectives at the public’s expense. McBride notes the FDA has written a letter officially recognizing Facts Up Front because it is based entirely on data from the Nutrition Facts panel.

“It takes the Nutrition Facts panel information, condenses it into the most important pieces, in a simple and easy format,” he said. “FDA has said it’s anxious to see Facts Up Front in the marketplace and to see how consumers react to it.”

While the debate has been sharp, it has not been politicized to extent that other common welfare issues such as gun control have. Overwhelming evidence of the obesity epidemic and the rise of diet-related diseases like diabetes have compelled all parties to move in the same general direction — towards informative, transparent labeling. The point of debate right now is how best to convey the information shoppers need.

“They don’t want to be told what to do,” said McBride of GMA’s findings. “They want to be provided with the tools and the information to make decisions as the decision-maker for their families.”

No one doubts that the consumer is the ultimate driver. Even though they say they want the information, they may not be sure how they want to use it. And so the experiment with labels goes on.

“We have to use as many tools as we can,” said Johnson, the consultant. “Labeling can provide consumers with the right information to make the right choices.”

Sidebar: More Than a Spoonful

There’s nothing sweet about recent statistics from the Centers for Disease Control and Prevention showing that adults are getting nearly 13% of their daily total calories from added sugars. Younger males are consuming even higher amounts.

Current dietary guidelines state that adults should get no more than 15% of their calories from added sugars and solid fats — combined.

Added sugars have emerged as a key differentiator among competing front-of-pack nutrition label programs. The Institute of Medicine’s report to the Food and Drug Administration recommended making added sugars one of the three nutrients on which a product should be evaluated.

The Facts Up Front system, created jointly by the Food Marketing Institute and the Grocery Manufacturers of America, has opted for listing total sugars.

Some dietary experts believe the distinction is important.

“Naturally occurring sugars like the kind in fruit are accompanied by vitamins and other nutrients,” said Marion Nestle, a professor of food policy and author. “You worry a lot about added sugars. They’ve never been singled out and listed.”

Other stakeholders note that properly counting calories addresses the sugar problem, since all sugars — natural or added — contribute to calories.

Either way, the FDA will likely specifically address the question of added sugar when the agency issues its guidelines for FOP labeling sometime this year.