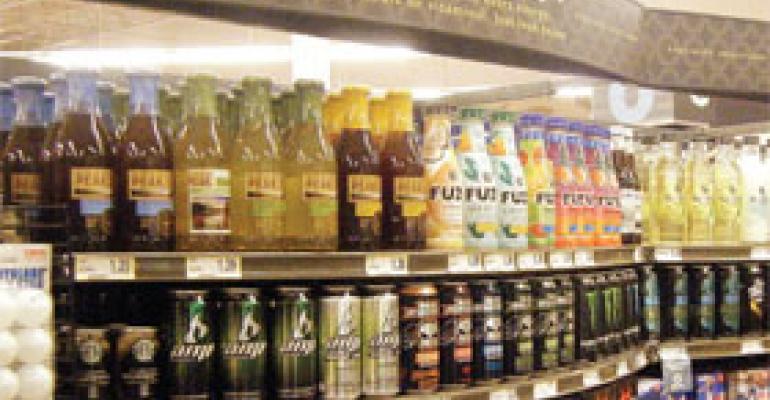 THIS IS NOT YOUR TEENAGER'S super-caffeinated energy drink. More adult, healthful formulations have come to market in the past year, touting herbal ingredients and vitamins, reduced sugar and calories, and other characteristics that promise to expand the appeal of these beverages to new demographics. While supermarket sales of mainstream brands such as Monster and Red Bull continue to increase annually,

THIS IS NOT YOUR TEENAGER'S super-caffeinated energy drink.

More adult, healthful formulations have come to market in the past year, touting herbal ingredients and vitamins, reduced sugar and calories, and other characteristics that promise to expand the appeal of these beverages to new demographics.

While supermarket sales of mainstream brands such as Monster and Red Bull continue to increase annually, the category is quickly maturing and there is concern that manufacturers may not be able to sustain growth without new customers. Up until now, almost all energy beverages were targeted toward young men, with names like Full Throttle, Amp and Rockstar. And, until recently, most contained high levels of sugar and caffeine.

However, consumers are beginning to read ingredient labels and are seeking new benefits from their beverages of choice. As a result, the top claims for new energy drinks launched from March 2008 through March 2009, according to Mintel International Group's Global New Products Database, include: added vitamin and/or minerals (83 new products); low, reduced or no sugar (78); low, no or reduced calories (41); no additives or preservatives (40); low or reduced carbs (28); all natural (26); kosher (24); other functional (20); organic (19); and on-the-go (16).

“[Manufacturers] are trying to make energy drinks appear healthier, more natural and better for you. They are trying to bring in more people who simply want a lift,” said Tom Pirko, president of beverage consulting firm Bevmark in Buelton, Calif.

“The driving trend seems to be products with functional benefits, instead of just something sweet to drink for a while,” agreed John Clevenger, managing director of management consulting firm Meridian Consulting in Wilton, Conn.

“We do have the versions with less sugar and fewer calories in Monster and other brands, and they are doing well,” said Eichorn. He believes demand for more healthful versions of energy drinks can be traced to the popularity of vitamin-enhanced waters and healthier sports drinks, such as Gatorade's successful low-calorie G2.

“This has happened in pretty much every beverage category, because people are looking for that,” Eichorn said.

Although Big Y's corporate dietitian, Carrie Taylor, has not seen an influx of functional energy drinks, she has seen a growth in the vitamin-enhanced water category.

“With added vitamins and minerals, the beverage itself becomes a functional food. This holds true for nutraceutical beverages like Joint Juice Fitness Water with glucosamine for joint health,” Taylor said.

“I think it has kind of peaked. It went up for a few years; now it is fairly flat,” Eichorn said.

Although the category experienced 363% sales growth in all outlets from 2003 to 2008, it cannot maintain its high growth rate, according to Mintel International's 2008 “Energy Drinks — U.S.” report.

“The high price of energy drinks, compared with other non-alcoholic beverages, is the biggest barrier in consumer trial and acceptance,” the report stated. Energy drinks sold in food, drug and mass merchandiser outlets carry a 258% price premium over fruit juices, according to Mintel.

In addition, energy drinks need to appeal to consumer groups other than teenagers — a population that's expected to drop by around one million over the next four years — and those interested in improving their health.

“Racy marketing and the presence of high amounts of sugar and caffeine do not garner universal appeal, especially amid the growing consumer trend towards attaining holistic health,” continued the report.

Meanwhile, the functional energy drink trend has not necessarily taken off in supermarkets. Many are devoting only 4 or 8 feet to the main energy drink brands, and realize there are too many varieties of energy drinks on the market.

“There must be 500 of them out there; it is mind-boggling,” said Ross Nixon, executive vice president and chief operating officer of Dahl's Food Markets in Des Moines, Iowa.

Dahl's carries the top sellers, such as Red Bull and Monster, and has taken some reduced-sugar line extensions from the brands. However, Nixon declines to meet with representatives from unknown brands. There are just too many new ones, with innumerable benefits to choose from, he explains, which makes it overwhelming for buyers.

Shoppers can be just as frustrated as retailers by the complexity of the energy drink category, according to consumer research conducted by Meridian Consulting. “They find it very confusing to shop. They find that most retailers just throw it on the shelf, but shoppers would like to know more about the products,” Clevenger said. As a result, he suggests grouping all functional beverages together — enhanced waters, healthful sports drinks and functional energy drinks — in one section.

“Consumers make a clear break between mainstream beverages and emerging or alternative beverages. If you do a better job of grouping or explaining these products, you will find more people buying them,” Clevenger said.

“The clearer the message, the easier it is to understand and the better the sales. You have to get beyond the catch-all [energy drink] that is high in antioxidants, natural, organic and everything else,” Pirko added.

Along with that, advertising and marketing messages around functional energy drinks also have to be as clear as possible. “[Beverage companies] are communicating with consumers on shelves, the Internet and cable TV in a way that is very highly focused,” Pirko said.

To maintain high sales and profit margins in the energy drink category, consultants and grocery merchandisers suggest the following strategies:

• Add energy drinks at refrigerated beverage cases at the front end. Big Y in Springfield, Mass., is expanding its selections at coolers near checkouts from sodas and bottled waters to include individual energy drink cans. “That should help our energy drink sales,” said Bill Eichorn, grocery category manager for Big Y.

• Offer different levels of pricing within the category. More retailers are segmenting to include three groups: top-performing products with premium prices that consumers can “grab and go”; mid-level or “everyday” pricing; and cut-rate pricing that is comparable to pricing on soft drinks. By offering three different pricing levels, shoppers will not dismiss the category as being “too expensive,” said Tom Pirko, president of beverage consulting firm Bevmark.

• Promote energy drinks with price and frequency, featuring them regularly in circulars. Costco Wholesale, for example, displays Monster at the front of some of its stores for $1.15 each when buying by the case. Bashas' in Chandler, Ariz., and Big Y promote energy drinks in their circulars on a regular basis. “Monster started promoting with us in the circular a couple of years ago, and sales went through the roof. Promotion is key, especially in this economy,” Eichorn said. Bill Terry, beverage buyer for Bashas', says that the retailer's energy drinks are discounted two or three times a month.