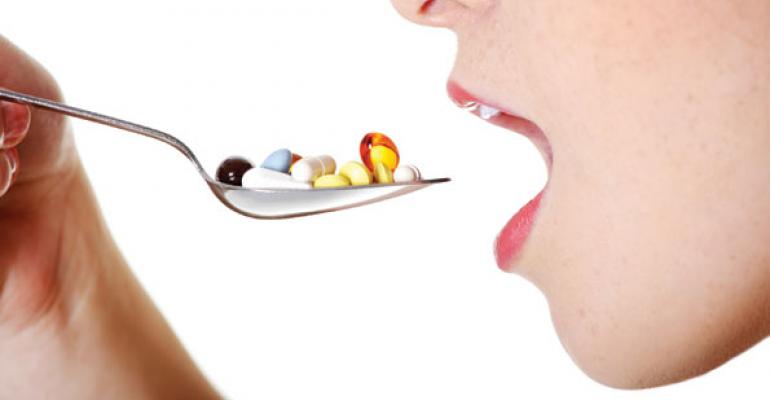 &nbsp; While dietitians stress that whole foods are best, vitamins and supplements gain momentum in supermarkets.

Sales of vitamins have risen steadily in supermarkets over the past year.

Select supplements, like fish oil, vitamin D and calcium are faring particularly well. So are liquid forms of everything from multivitamins to vitamin C with citrus bioflavonoids. Even vitamin E is making a comeback after medical claims of overdose deaths sent shoppers into a scare, retailers told SN.

While sales are up, some stores have noted a slight shift in shopper spending habits from manmade supplements to foods naturally rich in vitamins and minerals — and fortified foods — as in-store dietitians continue promoting a food-first approach.

“All dietitians recommend that supplements are not a fix for a bad diet, but instead are needed to fill nutrition gaps that may occur,” said Tina Miller (right), healthy living advisor for Grand Rapids, Mich.-based Meijer.

“Shoppers are very interested in multivitamins in our stores, particularly those that are need-specific like senior vitamins, men’s or women’s. Vitamin D, calcium, vitamin C, glucosamine and probiotics are popular too.”

The trends at Meijer are indicative of those in most supermarkets. According to figures from SymphonyIRI Group, a Chicago-based market research firm, sales of vitamins increased 6.8% to $1.1 billion in grocery stores during the 52 weeks ending March 18, 2012.

Liquids have caught consumers’ attention for several reasons, one of which has no medical backing, said Miller.

“Some people believe that liquids are superior quality whole food extracts and are more completely absorbed, but there is no data to support these claims,” she said. “Liquids do work well, however, and are great for those who have difficulty swallowing pills. Most cost two to three times more than capsules though.”

At Fresh Encounter, Findlay, Ohio, sales of nearly all types of vitamins have gone up since 2010, said Mike Needler, executive vice president of the chain. Certain items are flying off the shelves at the supermarket’s two stand-alone vitamin and nutraceutical stores called “Apple a Day.”

“Recently, we’ve experienced a significant increase in sales of high-end, holistic or natural multivitamins that have no dyes and are not highly processed, with bonding agents,” said Needler. “Fish oil, krill oil and flax are still going strong too. Coconut oil in pill and liquid forms is also a hot item as studies reveal that it can help slow the onset of dementia and Alzheimer’s, lowers triglycerides and can aid in weight loss.”

He said consumers are more educated about the benefits of individual supplements thanks to programs like the “Dr. Oz Show” and “The Doctors.” Skyrocketing health care costs have had an impact on shopping trends as well.

“As consumers encounter increasingly high medical bills, they are turning to vitamins as a means of being proactive rather than reactive,” he said. “They’re spending a little on vitamins now vs. a lot on doctor bills later.”

Prevention is a top priority for people purchasing from FreshDirect, an online, home-delivery retailer based in New York City. Fish oil and flax oil are two of the biggest sellers there.

Maggie Moon, corporate nutritionist for FreshDirect, believes that these sales trends are directly related to ongoing research on the health benefits of omega-3 fatty acids.

“We also do well with prevention-minded vitamins such as basic multivitamins, Airborne and Flinstones gummies,” she said. “This points to a welcome shift in shoppers’ interests in wellness over cure. They’re understanding that vitamin supplements are most useful when they provide nutrients that can be challenging to get from foods in our regular diet.”

Moon cited vitamin D, folic acid and plant sterols as examples of what people most commonly need to complement their daily food consumption. Plant stanols and sterols are in such high demand that even CPG manufacturer Procter & Gamble has gotten in on the action.

The company’s Next Chapter line includes Zyflamend, a proprietary blend of 10 botanicals sold as an anti-inflammatory item. Along with multivitamins, Zyflamend is one of the current top-selling SKUs made by P&G.

Scott Wink, director of pharmacy for Piggly Wiggly Carolina Co. concurred. However, he reported a slight decrease in vitamin sales due to some shoppers selecting fortified foods in lieu of supplements.

“The increased availability of nutrient-rich and organic products may be steering people toward spending their supplement dollars on slightly more expensive food products,” he told SN. “People are also interested in probiotic yogurts, vitamin-rich Luna Bars and fortified beverages, all of which are new alternatives to the traditional supplement. This may be shifting dollars out of the supplement category and hiding them in those traditional grocery department figures.”

Few shoppers purchased vitamin E at the chain after medical reports linked the overdoses of the vitamin to some deaths several years ago. But Wink is optimistic that sales will rebound.

“Most people understand that prescriptions and supplements have limitations as to how much should be taken,” he said. “So while vitamin E sales are decreasing now, in the long term people should be more confident in the lower-dose products and demand should come back quickly.”

Fresh Encounter experienced a temporary rise in vitamin E sales recently when the once-deemed “heart healthy” supplement became a prostate cancer preventative product. Then, some evidence surfaced suggesting that too much vitamin E can actually cause prostate cancer.

“It’s amazing how responsive shoppers are to the latest studies. Any kind of publicity can easily shift trends in this category, which is why marketing works so well when it is out there,” said Needler. “With Procter & Gamble now in the VMS category and its massive marketing push for the company’s New Chapter brand, I expect overall sales to go even higher in upcoming years.”

“As people age, which we all do, there is an increased need for supplements, like lutein and zeaxanthin for macular degeneration or glucosamine and chondroitin for joint ailments,” said Wisner. “Plus, most pharmaceuticals leach nutrients from our systems, so anyone taking prescription medicines will need supplements.”

Even over-the-counter antacids pull out calcium and inhibit absorption of B-12, requiring people to take vitamins to regain what they’ve lost, he added.

In-store dietitians have been focusing efforts on educating shoppers about this reaction. Many are counteracting consumer concerns about dangerous drug interactions that have some shoppers scared to take supplements at all.

“Supplements can interact with medications and shoppers are becoming more aware of this. Our registered dietitians suggest that shoppers bring a complete list of their medications to our in-store pharmacists to ensure that they are safe,” said Miller. “I often recommend that people throw all of their prescriptions and supplements into a brown bag to bring with them so the pharmacists can see what and how much of  everything they’re taking.”

With proper education, shoppers tend to feel more confident in their vitamin purchases. When they do, they turn their attention to savings, said Wisner. This, he feels, is where many supermarkets are missing a major opportunity to make money.

“If consumers are taking supplements every day, they benefit from buying larger, value-sized packages. With something as expensive as supplements, people don’t want to go to a supermarket and spend twice as much for a tiny bottle that will only last them a few weeks,” he told SN. “So, they’re bypassing supermarkets and buying bulk at Costco or Wal-Mart, choosing a several-month supply whenever possible.”

“Space may be an issue at supermarkets, but it makes sense to at least have bulk bottles of the top-selling supplements in order to capture more of the market share,” said Wisner.  Because supermarkets specialize in food, this may not be the top priority, he added.

Consumers share a similar perspective, said Miller. While she expects shoppers to continue consuming vitamins, she expects more people to adopt the food-first focus in the future.

“I believe that we will see continued growth in functional foods, those that impart a health benefit naturally, like fiber in flaxseed,” she said. “Enriched foods with cholesterol-lowering plant stanols and sterols — think Smart balance products — are also likely to do well as consumers try even harder to get their essential nutrients from closer to the original source.”