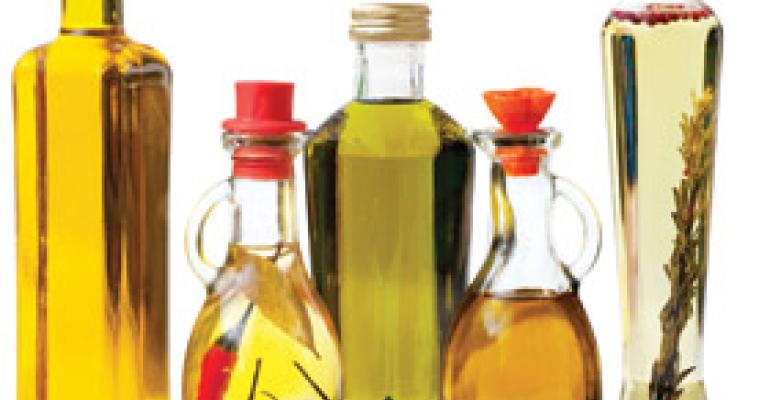 CONSUMERS WANT THEIR BODIES to be well-oiled machines, and they mean that literally. First there was olive oil, which grew to become a kitchen staple prized for its rich flavor and health benefits. As that category has matured, shoppers' tastes have migrated to a variety of plant and seed-based oils like hemp, coconut, avocado and flaxseed, among others. Each offers a unique profile in terms of nutrition,

CONSUMERS WANT THEIR BODIES to be well-oiled machines, and they mean that literally.

First there was olive oil, which grew to become a kitchen staple prized for its rich flavor and health benefits. As that category has matured, shoppers' tastes have migrated to a variety of plant and seed-based oils like hemp, coconut, avocado and flaxseed, among others. Each offers a unique profile in terms of nutrition, taste and application. Some thrive in the saucepan, while others are better for drizzling atop a salad or a bowl of yogurt. No matter how they're doled out, its clear culinary oils have come a long way from the deep fryer.

“People have gotten pretty creative with these healthier oils,” said Summer Auerbach, chief of operations at Rainbow Blossom Natural Foods, a whole health supermarket with five stores in the Louisville, Ky. area. “They're mixing oils into garlic infusions or blending them with basil and straining them out and using that as a drizzle on top of soup. It's a separate category that has become really strong for us.”

The rising star lately has been coconut oil, which used to be a nutritional villain due to its saturated fat content. Recent studies have shown that the unrefined fats contained in coconut oil may actually be beneficial, and high-profile endorsements from the likes of Dr. Oz have spurred mainstream interest. These days, consumers use it as a cooking oil, a supplement and even as a lotion. Retailers like Whole Foods Market are seeing double-digit growth as a result.

“Seven years ago everyone was wondering what coconut oil was, and now it's our most popular oil,” said Auerbach.

A lineup of similarly distinct oils have proliferated throughout stores, turning culinary oil into a connoisseur's category akin to wine or cheese. There's avocado oil, which has a high smoke point and can be used to sear meat. Sunflower oil is multifunctional and has a mild flavor. Hemp oil has a nutty taste and a low smoke point, and goes well atop salads and other vegetables.

Each of these new-age oils serves as a low-fat, low-calorie alternative to regular cooking oil, and each advertises functional ingredients like omega-3s and antioxidants. Studies have shown that hemp oil, for instance, is a good source of omega-3 and omega-6 fatty acids. Mike Fata, president of the hemp food manufacturing company Manitoba Harvest, says his hemp oil sales have grown by 40% to 50% each year, and is now carried by more than 5,000 retailers in the U.S. and Canada, including select Kroger and Publix Super Markets stores. Demand is such that supermarkets don't mind having to stock the oils in coolers separate from other types in order to preserve freshness.

“We launched in the natural channel, but now the majority of our sales are in the grocery channel because consumers are getting more familiar with the product,” said Fata.

All these newcomers are helping to unsettle olive oil sales, which have dropped over the past few years and now sit at just above $700 million, according to SymphonyIRI Group, a Chicago-based market research firm. Many believe the demand that fueled interest in the oil's health benefits has finally matured, but retailers and manufacturers still think the category has legs. When consumers began cooking at home more during the recession, they did so with the help of olive oil.

“Americans know their olive oil,” said Patricia Darragh, executive director of the California Olive Oil Commission. “They know their brands, and they equate them all with health.”

Supermarkets have leveraged that awareness by expanding their offerings. Fairway Market in New York, for instance, stocks more than 100 different types of olive oil ranging in price from $10 to $40, including 14 own-brand oils. At Jungle Jim's International Market, Fairfield, Ohio, shoppers can choose from 230 varieties of olive oil. Buyer Wayne Seibert said his section runs 32 feet, with 4-foot splits dedicated to categories like Greek, Spanish and Italian olive oils, as well as flavored varietals like lemon and spice-infused.

“My customers come in because of the variety, and they shop the whole section,” said Seibert. “The Italian oils get shopped the most, but the Spanish and Greek olive oils definitely have a following.”

Awareness of domestic olive oils is growing, according to the COOC's Darragh. She noted that California, which produces 99% of the olive oil produced in the U.S., currently has 25,000 acres dedicated to extra-virgin olive oil olives, and expects to increase by 8,000 acres per year.

Olive oil is also gaining notoriety for its sustainable qualities.

“Olive trees last for centuries, and they use much less water than other fruit and nut trees,” said Darragh.

Despite all these avenues for growth, though, purity issues have dogged the olive oil category. Problems with adulteration in the 1990s led the European Union to establish a task force to investigate producers. The International Olive Council, whose members account for 97% of global olive oil production, has developed standards and monitoring. Domestically, COOC established its own mandatory standard in 2003 for the state's producers, and last year the U.S. Department of Agriculture announced certification for different grades of olive oil, ranging from refined to extra-virgin.

Recent reports, like one from the Olive Center at the University of California-Davis, claim there are still quality problems with imported olive oils. The IOC and other industry players claim otherwise.

Retailers, meanwhile, agree that no matter what the regulatory landscape is like, the burden falls to them to know their producers.

“If a vendor comes in and presents an oil, we do as much research as we can to make sure that everything is up to standard,” said Seibert.

Once vendors make the cut, they'll often return to Jungle Jim's to do tasting demos. Seibert also makes sure his staff is up to speed on the available selection and trends within the industry.

“We're always looking for customers who will have questions about the section,” he said.

Dipping stations offer a way for retailers to engage shoppers and showcase their wide selection of olive oils. Darragh noted that an increasing number of gourmet retailers also host tasting events, where customers sample different flavors of olive oil and learn what foods to pair them with. The popularity of these events has given rise to a new class of retail stores like Paso Robles, Calif.-based We Olive, devoted solely to selling olive oil.

With so many different oils to choose from, education is key for retailers. PCC Natural Market and Whole Foods Market offer online guides to the wide selection of oils they carry. PCC features a chart showing the cooking temperatures for each oil, and has a page outlining how to store various oils, the difference between refined and unrefined oils, and more. Whole Foods' guide includes everything from culinary tips to a rundown of the types of fats found in the oils it sells.

At Rainbow Blossom, education means everything from in-store classes about various oils and their health benefits to making sure staffers in the grocery and supplement departments are interacting with customers. Oftentimes, the best strategy is to let them taste the product.

“One of the standard things we'll do is take some flax oil, put some crushed garlic and black pepper in there and put that out as a dipping oil with some bread,” said Auerbach. “That way, they get a sense of the flavor and also use it as a serving idea. We'll do that at fairs, in stores, pretty much anywhere we want to start a conversation.”

Most shoppers associate olive oil with far-flung countries like Italy, Spain and Greece. But there's a growing industry right here in America, too — in California, to be exact — and industry officials are anxious to spread the word.

“We're one of the fastest-growing agricultural products in California right now,” said Patricia Darragh, executive director of the California Olive Oil Commission. “We have 25,000 acres planted right now strictly for extra-virgin olive oil, and through 2020 we're predicting an increase of 8,000 acres a year.”

California currently accounts for 99% of domestic production, but only 1% of total consumption at retail. To grow that number, the COOC and its producer members market around the purity of their product. In 2003, the commission developed its own mandatory standard for extra-virgin olive oil, which includes a tasting panel and chemical analysis. Darragh said the standard is even stricter than the one maintained by the International Olive Council, and that it could provide a helpful contrast to imported oils, which have faced adulteration scandals over the years.

Along with the olive trees, there's a unique olive oil culture growing in California. Dedicated retailers like We Olive, based in Paso Robles, are beginning to spring up, offering regional olive blends like the Alta Cresta Tuscan Orchard Blend. It's not uncommon, either, to see kitchens with a stainless-steel fusti that holds several liters of olive oil.