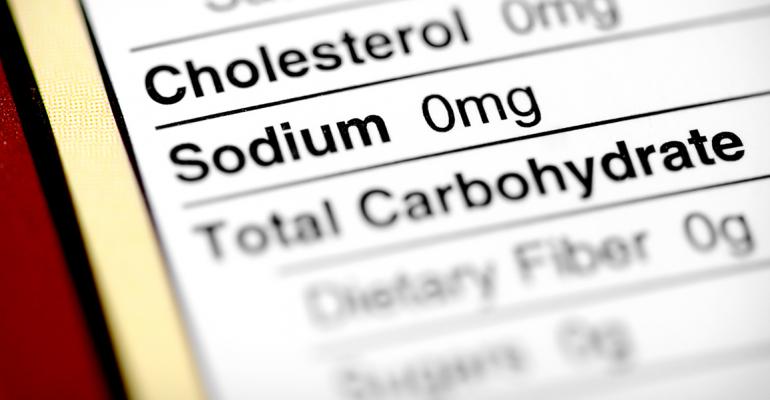 The Grocery Manufacturers Association responded positively to the FDA’s issuance of draft sodium reduction targets for 150 categories of processed, packaged and prepared foods, and the opening of a public comments period on these voluntary reduction targets, Tuesday.

“GMA and its member companies are committed to continue our efforts to provide consumers with healthful choices. We welcome a dialogue with FDA on its sodium reduction targets and look forward to working with the agency to ensure the best and most recent science is taken into account when determining sodium intake levels for optimal health for all Americans,” said Leon Bruner, chief science officer, GMA, in a statement.

“Success in cutting sodium consumption will require a holistic approach that includes actions by manufacturers, retailers and restaurants and that addresses consumer behaviors and preferences.”

The FDA draft targets include two-year and 10-year goals for the industry and are intended to help Americans gradually reduce sodium intake from the current average of 3,400 mg per day to 3,000 mg per day and eventually 2,300 mg per day, respectively. The latter is the level recommended by experts.

“The targets are intended to complement many existing efforts by food manufacturers, restaurants and food service operations to reduce sodium in foods,” said FDA commissioner Dr. Robert Califf, who is also a cardiologist who suffers from hypertension, during a call with media. “Sodium comes from a lot of different types of foods, not just the ones we think of as high in sodium. Additionally sodium has important functions in many foods such as taste, texture and microbial safety and it can’t simply be removed without careful consideration to these factors. Not only is this approach more precise than a one size fits all strategy, but it also recognizes that different foods have different potential for sodium reductions. As a result different categories have different sodium reduction targets.”

The FDA developed the voluntary draft targets after analyzing the current range of sodium in food categories, along with considering scientific research and after discussions with industry experts. Salad dressing and bread are two of the included categories.

“We looked at the amount of sodium in salad dressings and there was variation from 150 milligrams of sodium per 100 grams up to over 2,000 milligrams, so with that type of variation it’s clear that we can make progress, so the [salad dressing] targets we’re issuing would have a greater decrease,” explained Dr. Susan Mayne, director for the Center for Food Safety and Applied Nutrition, FDA. “With wheat bread our analysis showed a range of 220 milligrams per 100 grams of bread up to 671 milligrams, so these are examples of products where it’s very appropriate to lower the sodium amount.”

Califf noted that many top-selling pretzel products have already met the short-term targets for sodium reduction that are being proposed by the FDA. Bruner likewise highlighted the industry's efforts.

“GMA members are continuing to improve the nutritional profile of their products and have made more than 30,000 healthier product choices available to consumers between 2002 and 2013 by reducing sodium, calories, sugar and saturated fat, and increasing whole grains, fruits and vegetables,” said Bruner.

“These include 6,500 product choices with reduced sodium, as GMA member companies have been reformulating products to provide lower sodium options to help consumers achieve healthy sodium intake levels. A 2014 study shows that the food and beverage industry reduced sodium in products purchased by consumers by 16 percent over five years (between 2008 and 2013) – a total of 28 million pounds. This is equivalent to over 100 mg sodium per person per day.” The FDA would not provide a timeline for when the voluntary targets would be established or whether the voluntary targets could possibly be finalized before the change in administration. “We can’t speculate on timelines,” said Mayne. “We expect that we’d finalize the two-year [targets] prior to ten-year, but we don’t know how much time will be needed,” she said.

There are 39 countries that have set sodium reduction targets, 36 of which are voluntary.