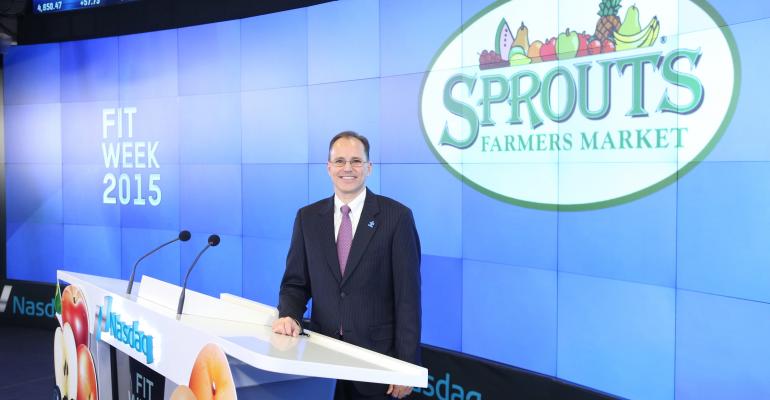 In an effort to better accommodate convenience minded shoppers at dinnertime, Sprouts Farmers Market is investing in additional grab-and-go options ranging from sushi to rotisserie chicken, officials of the retailer told SN in an interview Thursday.

“We've traditionally done really well with the 12 o'clock customers with lunches and sandwiches,” Donna Egan, spokeswoman for the Phoenix-based natural foods retailer said. “But we're working to improve the offerings around 5 o'clock or 6 o'clock.”

The revamped prepared food offerings at Spouts are rolling out through store renovations and new store builds with expanded prepared foods in mind. The offering is targeted toward helping shoppers do more of their overall shopping at Spouts while responding to consumer demand for greater convenience and on-the-go lifestyles typical of younger shoppers, Egan said.

Sprouts officials were in New York Thursday to ring the opening bell of the Nasdaq stock market as part of Nasdaq’s annual “fit week” events. Janet Little, Sprouts’ director of nutrition, said the convergence of healthy eating and convenience was driving food trends, noting for example that pouched fruits and vegetables are a hot seller at Sprouts’ 190 stores today.

“Before this was largely a trend for athletes and infants, but we’re seeing it become more popular for adults due to the fact that its so convenient,” Little told SN.

Little said the company this year is focusing its health and wellness message around the importance of small changes in diet and exercise as a means to better health, calling the campaign, "Every Meal is a Choice.”

“We’re helping people to make wiser choices by saying that making little changes in your dfiet and lifestyle can lead to large rewards,” she told SN. “Oftentimes you see at new year [that] people want to radically change their diet, and find that by the end of January they're back to their old habits. So what we're trying to do is educate people to choose wisely, make small changes, not big dramatic ones. You're more liable to stick to small changes, and over time, that builds a healthier lifestyle. Avoid the extremes.”