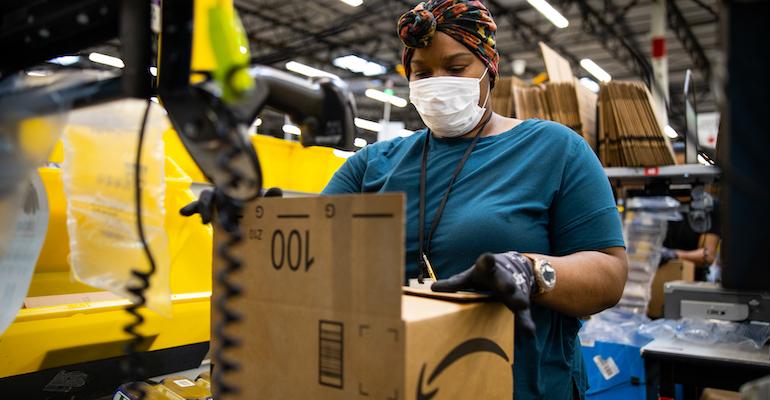 Amazon
As of April 1, the worker vote at Amazon's JFK8 warehouse in Staten Island stood at 2,654 for and 2,131 against forming the Amazon Labor Union.
Issues & Trends

Workers at Bessemer, Ala., warehouse reject unionization for second time

Amazon is weighing its next steps after workers at a fulfillment center in Staten Island, N.Y., voted to unionize, which would mark the e-tail giant’s first facility to vote for union representation.

As of Friday, the vote at the Staten Island warehouse, dubbed JFK8, stood at 2,654 for forming the Amazon Labor Union (ALU) and 2,131 against, according to published reports. National Labor Relations Board (NLRB) certification of the vote is pending.

Related: Amazon warehouse workers in Alabama give thumbs-down to union

Sixty-seven ballots in the April 1 vote are being challenged, reports said, but those ballots are well short of the 523 vote differential to impact the result. Overall, about 8,325 workers were eligible to vote.

“Amazon Labor Union (ALU) has made history by becoming the first to successfully unionize an Amazon facility in the United States and, in doing so, they will inspire Amazon co-workers across the country,” United Food and Commercial Workers International (UFCW) President Marc Perrone said in a statement. “Even in the face of millions of dollars in illegal, union-busting campaigns and consultants, they have shown it is possible to win by standing up for each other. The entire UFCW family of 1.3 million essential workers is thrilled to have them as a partner in our continued mission to improve the lives of all Amazon workers.”

ALU is being led by former JFK8 manager Christian Smalls, who was dismissed by Amazon in March 2020 for alleged noncompliance with the company’s social distancing guidelines.

Seattle-based Amazon on Friday expressed disappointment with the result at JFK8 but said it may challenge the vote, citing potential influence by the NLRB.

On March 17, an NLRB regional director filed a petition in U.S. District Court for the Eastern District of New York that called on Amazon to rehire an employee who had been fired from the Staten Island warehouse. Yet the employee termination occurred nearly two years ago, while the petition came just two weeks before the union vote. Amazon noted that the National Retail Federation on April 7 sent a letter to congressional leaders requesting an investigation of the NLRB lawsuit, while an earlier blog by the U.S. Chamber of Commerce questioned the timing of the NLRB’s petition in relation to the upcoming vote.

“We’re disappointed with the outcome of the election in Staten Island because we believe having a direct relationship with the company is best for our employees,” Amazon said in an April 1 statement. “We’re evaluating our options, including filing objections based on the inappropriate and undue influence by the NLRB that we and others (including the National Retail Federation and U.S. Chamber of Commerce) witnessed in this election.”

Meanwhile, workers at Amazon’s fulfillment center in Bessemer, Ala., appear to have given a thumbs-down to representation by the Retail, Wholesale and Department Store Union (RWDSU), which would mark the second time that the facility’s employees have rejected unionization.

Of the 1,868 ballots counted through March 31, 993 workers voted against the union versus 875 in favor, with 416 ballots being challenged and 59 ballots voided. Approximately 6,100 employees at the Bessemer warehouse, known as BHM1, were eligible to vote. 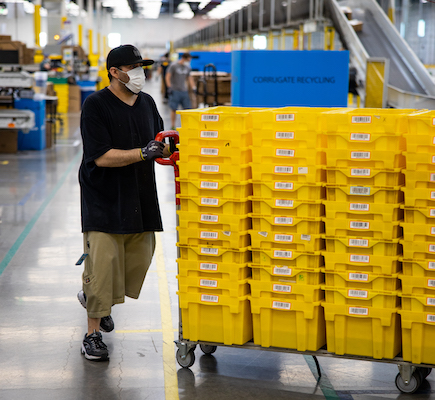 Employees at Amazon's fulfillment center in Bessemer, Ala., appear to have rejected unionization with RWDSU for a second time. (Amazon)

New York-based RWDSU, which is affiliated with UFCW, reported that a hearing on the challenged ballots from the March 31 vote is pending. The election result also awaits NLRB certification.

“Every vote must be counted. Workers at Amazon endured a needlessly long and aggressive fight to unionize their workplace, with Amazon doing everything it could to spread misinformation and deceit. We will hold Amazon accountable, and we will be filing objections on their behavior,” RWDSU President Stuart Appelbaum said in a statement on Thursday.

“Workers will have to wait just a little bit longer to ensure their voices are heard, and our union will be with them at every step to ensure their voices are heard under the law,” Appelbaum added. “What we do know is that this moment is historic, and the workers in Bessemer, Ala., have inspired working people all over the country and all over the world to fight for change at their workplaces, including other organizing at Amazon around the country.”

In April 2021, employees at Amazon’s Bessemer facility voted more than 2-1 against joining the RWDSU. At the time, the rejection of the union dealt a big setback to labor leaders, who saw a chance to organize workers at one of the world’s largest companies, which has been accused of engaging in anti-union practices.

“In the end, less than 16% of the employees at BHM1 voted to join the RWDSU union,” Amazon stated after the initial RWDSU vote last April.

Though last week’s vote in Bessemer remains unclear, Washington-based UFCW noted that the organized labor push at Amazon will continue.

“Whether in Alabama or New York, the movement to lift up essential workers at Amazon is real,” Perrone stated on Friday. “Most importantly,” he added, “these latest unionization efforts are just the beginning. It highlights the renewed power of workers and the determination of America’s entire labor movement to build a better and more just America.”