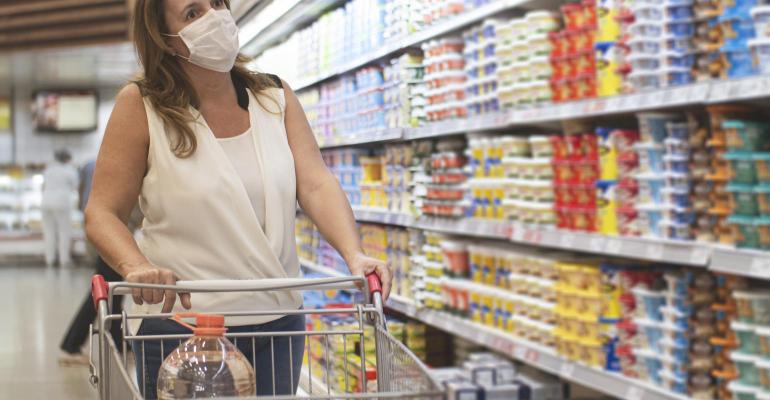 wsfurlan/iStock/Getty Images Plus
The FMI survey found that 69% of shoppers wear masks all or most of the time while in indoor, public spaces, compared to 13% who wear masks some of the time, and 18% who rarely or never wear masks.
Issues & Trends

For many shoppers, a return to normal has been put on hold

FMI report shows more than half of Americans remain very or extremely concerned about COVID-19, putting a damper on back to school and the office

After a year and a half of COVID disruption, many Americans were looking forward to a return to more normal lifestyles this fall, with going back to school and offices on the horizon. The introduction of vaccines was making that look like a reality earlier this summer, but since then the surge of the Delta variant and a continued reluctance on the part of many Americans to take the vaccine have put a damper on those plans.

A new report from FMI-The Food Industry Association, U.S. Grocery Shopper Trends Tracker: Back to School/Back to Office, shows just how much continued consumer concern over COVID is having an impact on daily lives and grocery shopping behavior. Among key findings of the survey, which was fielded this month:

Related: Mask up again, in areas where COVID cases are climbing, the CDC says

“For almost 18 months, through the evolution of information about COVID-19 and the introduction of vaccines in the U.S., some Americans have been able to foresee a return to their definition of normalcy,” observed Steve Markenson, director, research & insights, FMI, in a blog post. “The weeks leading up to Labor Day often mark a return to routine. This fall, offices where employees have been able to work from home have begun to schedule steps toward a return to office life. Many children will head back to in-person learning after making memories on summer vacations. Respecting Americans’ continued anxieties about staying safe and healthy, will these opportunities make it possible to imagine a light at the end of the tunnel and a return to a new — or next — normal? Grocery stores and other businesses could look forward to some degree of normalcy but also an imperative to plan for some rapid adjustments to align with this resumption of demand.” 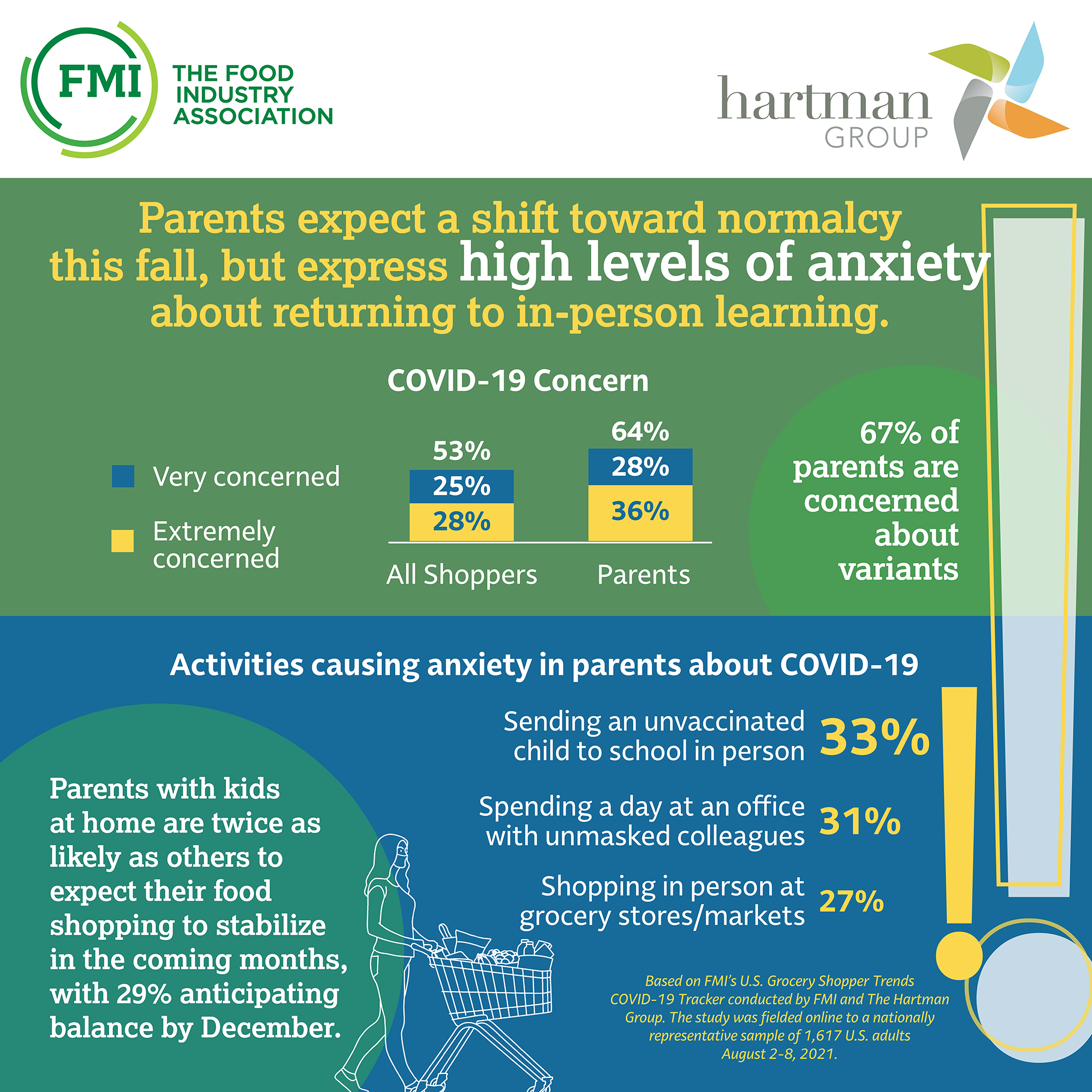 Related: For retailers and consumers, ‘living with COVID’ means a polarized path ahead

Grocery shoppers are still concerned about COVID-19, and even more are concerned with emerging variants such as Delta, the survey found. However, overall concern is down significantly versus February and the portion of shoppers who are extremely concerned with COVID-19 has declined to its lowest point since the onset of the pandemic in 2020. Concern is higher among households with children where 63% remain extremely or very concerned. This is true of variants as well, with 67% of households with kids extremely or very concerned. These are among many signs that while some shoppers view COVID-19 as something in the past, others see it as a burgeoning concern.

The report further noted that shoppers feel that going into stores is an acceptable risk, and masks can assuage remaining anxieties. Most (60%) now say it is acceptably safe to shop in person at food stores/markets, up from February 2021. Ordering online and picking up at the store continues to be regarded as safer, while there is less comfort with indoor gatherings either at a restaurant (25% risky) or hosting large groups (28% risky). Americans tend to show even more wariness of perceived risks beyond these consumer activities. Almost as many would consider it risky to share an office with unmasked colleagues (34%) or send an unvaccinated child to school (37%) as would consider these acceptably safe (39% and 38% respectively). Then again, those who actually face these decisions (parents and workers) do tend to perceive these risks as a bit more acceptable.

THINGS FOOD RETAILERS CAN DO TO ATTRACT IN-PERSON SHOPPING

Despite some ongoing wariness of shopping in stores in general, most shoppers say that what retailers do can make a difference to them, the FMI report found. Shoppers broadly agree on the value of sanitation and hygiene. Distance from staff and distance from other shoppers tends to be favored over more typical measures to connect with and support shoppers in the store. Retailers may need to find new ways to meet the needs for in-store service and connection in this context of perceived risks.

Mask requirements make the vast majority of shoppers feel safer. Shoppers differ in how they assess a risk of shopping where they may be unvaccinated shoppers or staff. But there is overwhelming recognition that mask requirements make for a safe store, and lead to far less anxiety. The survey found that 69% of shoppers wear masks all or most of the time while in indoor, public spaces, compared to 13% who wear masks some of the time, and 18% who rarely or never wear masks.

Despite concerns and setbacks in the fight against COVID, food shopping is back to normal for half of shoppers, with 36% saying shopping is already normal or stable, on top of 13% who claim it was never disrupted by the pandemic in the first place. This places food shopping among the earlier areas of daily life to achieve some degree of stability in a still-volatile pandemic context recently marked by the emergence of the Delta variant. Another 36% don’t expect that food shopping will achieve stability anytime this year. That leaves only one-out-of-seven shoppers (16%) who expect any resolution to their disrupted food shopping between September and the end of 2021.

Data used for this report was captured August 2-8, 2021, online among a national sample of 1,617 grocery shoppers. Research was conducted by FMI-The Food Industry Association, with analysis conducted by The Hartman Group.