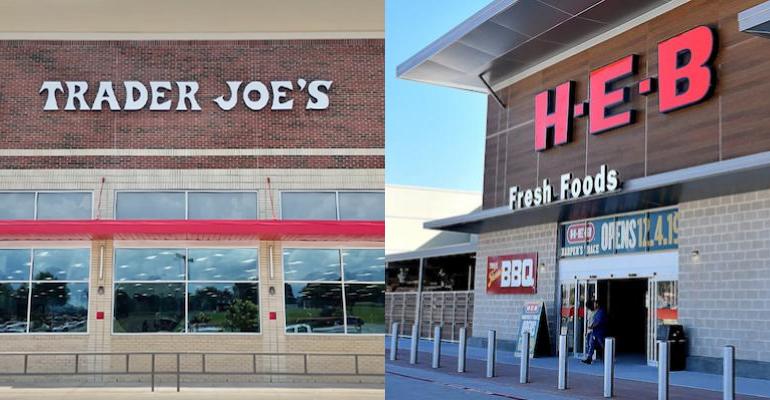 Trader Joe's/H-E-B
Trader Joe's and H-E-B came in first and second on the 2022 Axios-Harris Poll 100 across industries. Overall, 12 food, drug and mass retailers made the list.
Issues & Trends

Wegmans, Publix and Kroger also among the top 25 companies

Trader Joe’s and H-E-B finished atop this year’s Axios-Harris Poll 100, an annual ranking of the reputations of the most visible U.S. companies across industry sectors.

New York-based brand marketing network Stagwell Inc. said Tuesday that grocery retailers are “riding reputational highs” more than two years after the onset of COVID-19. Amid the burst in food-at-home demand and product shortages triggered by the pandemic, regional supermarket chains are particularly being recognized for “weathering the supply chain storm,” according to the marketing firm.

For the 2022 Axios-Harris Poll 100, three supermarket chains — Trader Joe’s, H-E-B and Wegmans Food Markets — were ranked in the top five, while two other supermarket retailers — The Kroger Co. and Publix Super Markets — came in among the top 25 on the list.

“As Americans move on from COVID, they are looking at corporate reputation through a more practical lens,” The Harris Poll CEO John Gerzema said in a statement. “Companies delivering on time and keeping their promises despite supply chain issues are being held in high regard. Businesses that also do their part to create a better world — whether through sustainability or taking a stand on authentic social issues — also are being rewarded."

This year’s Axios Harris Poll 100 was based on a two-step survey of 33,096 U.S. adults conducted March 11 April 3, 2022. The study starts with an initial survey of the public’s top-of-mind awareness of companies that excel or falter in society, Stagwell reported. Next, a second group of respondents ranks these 100 “most visible companies” according to seven criteria of reputation to determine a final ranking.

Cincinnati-based Kroger, the nation's largest supermarket operator, which came in 25th on the list, noted that it also ranked among the top 10 in the areas of citizenship and trust.

"Kroger's inclusion in the Axios Harris Poll 100 is testament to our amazing team of associates across the company and underscores the critical role that Kroger plays in the future of food," Keith Dailey, group vice president of corporate affairs at The Kroger Co., said in a statement. "With Zero Hunger | Zero Waste at the center of our ESG strategy focused on people, planet and systems, we are working to create a more equitable and sustainable food system to feed Americans for generations to come."

Overall, a dozen food, drug and mass (FDM) retailers made the 2022 Axios Harris Poll 100, led by Trader Joe’s at No. 1, H-E-B at No. 2 and Wegmans at No. 5. Amazon — which sells groceries under its brand via Amazon.com as well as its Amazon Fresh and Amazon Go store banners — came in at No. 7.

“It’s back to basics with companies that offer quality products and are guided by steadfast values riding to the top,” commented Mark Penn, chairman and CEO of Stagwell, which includes The Harris Poll. “Those that became enmeshed in political quagmires tended to be set back.”

On the 2022 list, Amazon and Walmart were again the two most-visible companies in the nation, followed by Apple, Facebook, Google, Target, Nike, Microsoft, McDonald’s and AT&T, according to Stagwell. Meanwhile, companies making their debut in this year’s Axios-Harris Poll 100 included Trader Joe's, Spotify, Big Lots, Shein and Subway.

In addition, the scores of the top 10 most visible and reputable companies — Trader Joe’s, H-E-B, Patagonia, Hershey, Wegmans, Samsung, Toyota, Amazon, Honda and Sony — were separated by only small degrees, ranging from just under 80 to just over 82.

“To excel at reputation, companies must deliver high marks on business performance, corporate character and trust,” stated Stagwell Vice Chair Ray Day. “While you can build a brand, you earn a reputation. Companies with strong reputations have a price advantage, a competitive advantage and a talent advantage. That’s why reputation needs to be a priority from the board room to the C-suite.”