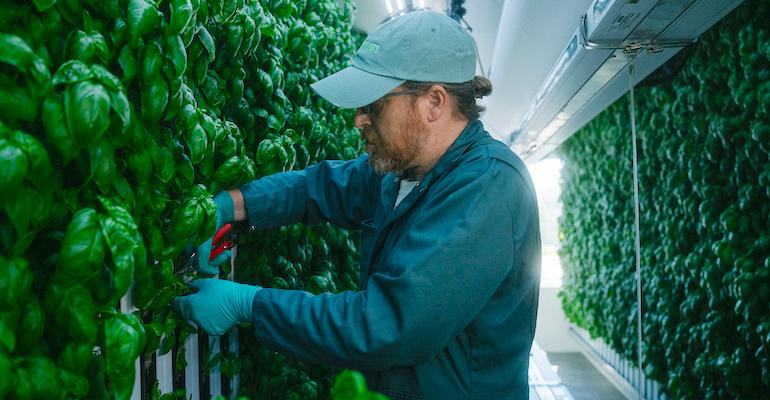 Under a partnership with New York-based Square Roots, announced Thursday, UNFI said the first Square Roots farm, about 20,000 square feet in size, is slated to open at its Prescott, Wis., facility in 2023. Produce from that indoor farm will serve UNFI's retail customers in Wisconsin and Minnesota, including the Twin Cities metropolitan area.

Pioneering a vertically integrated model for indoor farming, Square Roots can quickly deploy its modular, cloud-connected farms in any location on a small footprint, UNFI noted. The indoor farms provide optimal conditions to grow fresh produce consistently throughout the year. Crops are harvested and packed inside the Square Roots facility, ready for distribution to customers on the same day of harvest.

“Today’s consumer is focused on the quality and freshness of their produce and relies on their local grocer to provide consistent access to high-quality, locally grown food, all year round that won’t spoil the day after they bring it home,” Dorn Wenninger, senior vice president of produce at UNFI, said in a statement. “Our relationship with Square Roots and their innovative indoor farming model not only strengthens our supply chain and gives back days of freshness to consumers, but also furthers our ambitious ESG initiatives and helps UNFI make progress toward our goals to reduce waste, lower greenhouse gas emissions, and advance sustainable agriculture and operations.”

Square Roots said its farms grow a broad range of leafy greens, microgreens and herbs via an ultra-efficient hydroponic system that uses significantly less water and land than conventional field farms. The company’s farmers use proprietary software to manage every aspect of growing, from planning production tasks to monitoring plant health.

Square Roots produce is pesticide-free and Non-GMO Project-verified, the companies said, adding that all Square Roots farms also are USDA Harmonized GAP+ Certified for the highest levels of food safety.

“Whether we’re learning lessons from COVID-19, or considering the future impact of climate change, it’s clear that we need more resilience in our food system,” stated Square Roots co-founder and Executive Chairman Kimbal Musk. “With this partnership we can now bring local food, grown by local farmers, to UNFI’s network of retail customers and their shoppers, consistently and reliably, all year round.”

UNFI added that the Square Roots partnership stems from its “Better For All” initiative, in which the distributor aims to tighten relationships with produce suppliers to build an “efficient, expansive, high-quality” supply chain network to cut the time it takes to deliver produce to retail customers. For example, in early August, UNFI announced that it implemented new technology and processes to shorten certain delivery times by more than a day and realize the full potential of its data points to deliver fresher produce to stores.