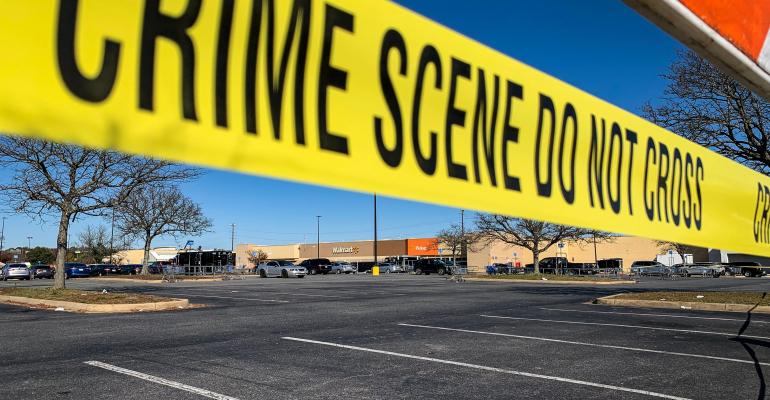 Bastien Inzaurralde (Getty Images)
Crime scene tape blocks the parking lot outside of a Walmart following a mass shooting the night before in Chesapeake, Virginia on November 23. A gunman killed at least six people at a Walmart store Tuesday just ahead of the Thanksgiving holiday in the second mass shooting in the United States in four days. Police later identified the gunman as an employee at the store.
Issues & Trends

Store manager targeted employees in a break room, according to reports

A mass shooting at a Walmart in Chesapeake, Va., Tuesday night left seven people dead, including the gunman, according to local reports.

The shooting comes as a man accused of killing 10 people at a Tops supermarket in Buffalo, N.Y., in May of this year is expected to plead guilty on Nov. 28, and three years after a mass shooting in a Walmart in El Paso, Texas, that left 22 dead. Both the Tops shooting and the 2019 Walmart shooting were reportedly racially motivated. It’s not clear what the motivation was for Tuesday night’s shooting at the Chesapeake Walmart.

Reports said the shooter was an overnight team manager who killed six store employees with a handgun and wounded several others before shooting himself. The shooting reportedly took place in a break room.

In a statement posted on Twitter, Walmart said, “We are shocked at this tragic event at our Chesapeake, Virginia store. We’re praying for those impacted, the community and our associates. We’re working closely with law enforcement, and we are focused on supporting our associates.”

The company could not be reached for further comment.

The shooting comes just a few days after FMI-The Food Industry Association announced that three Midwestern retailers—Heinen’s Grocery Store, Dierbergs Markets and Schuncks Markets—had signed up for an active shooter preparedness program that FMI offers in partnership with The Power of Preparedness (TPOP).

The training is an on-demand e-learning program that is specialized for the food retailing industry and seeks to provide tools that can help save lives in these situations, Dan Stechow, president and CEO of TPOP, told SN.

The course is designed as a series of short tutorials followed by a pop quiz, designed to hold workers’ attention and provide memorable, actionable advice, he said. An entire course covering situational awareness, verbal de-escalation and active shooter preparedness takes about 30-35 minutes.

“It has to be something that is memorable, and easily recalled in an emergency,” he said, noting that TPOP subscribes to the “run, hide, fight” philosophy when it comes to active shooter situations.

“If a shot goes off in the next room, you really only have to remember those three words,” he said.

The company expects to make more announcements soon about other food retail organizations that have signed up for the training, as well as some large restaurant companies, Stechow said.

“Is our company growing? Yes, and in some ways, that’s a tragedy,” he said. “I’d love to be out of business.”