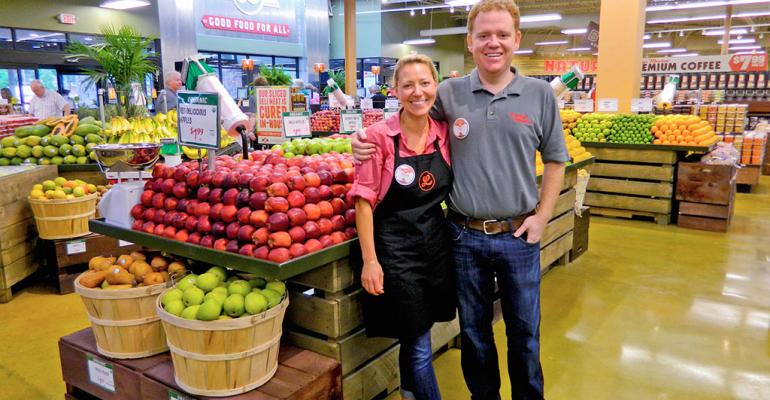 &quot;I can&rsquo;t speak for Kroger, but I can tell you we saw eye to eye on various pieces of the industry, and we agreed&nbsp;that our team members and associates are paramount to the success of our respective companies.&quot; &mdash;BO SHARON, LUCKY&#39;S

The surprise partnership between the largest U.S. supermarket operator and an upstart natural chain out of Boulder grew out of common interest in a vehicle providing value-prices and on-trend food, but was sealed only after their respective leaders saw eye-to-eye on ethics and culture.

“We got to know each other personally, and that was important to me,” Bo Sharon, co-founder and CEO of Lucky’s Market, told SN in an interview, describing how he and senior executives of Kroger — CEO Rodney McMullen and CFO Mike Schlotman — had a series of conversations earlier this year, including a tour of Lucky’s newly-opened outlet in Coral Springs, Fla. “I can’t speak for Kroger, but I can tell you we saw eye to eye on various pieces of the industry, and we agreed that our team members and associates are paramount to the success of our respective companies. So we shared a lot of the same ethics. They are very relationship-focused, and so are we.

“I think we were kindred spirits,” he added. “It was evident that they cared just as much who they were doing business with as I did.”

Those discussions led to Kroger’s decision to make what it called a “meaningful investment in Lucky’s, which will significantly accelerate Lucky's Market's growth in new and existing markets.” Lucky’s will continue to operate under its current management team, the companies said.

Sharon declined to say whether Lucky’s was actively seeking a partner when Kroger reached out to initiate discussions. However, he noted their agreement would help Lucky’s achieve two goals that would be difficult without its help — to offer competitive retail prices, and the ability to build additional stores and density.

“The business intelligence, the efficiencies and the scale of Kroger have various benefits to us. We’re 17 stores, they’re over 2,200,” Sharon noted. “The purchasing power, [and] the ability to drive retails downward are all things that that our customers will be experiencing.”

What Lucky’s has built to this point — largely through foreign investors participating in the federal EB-5 program — has appeared to have impressed Kroger. Lucky’s offering combines the indulgent spin on natural/organic and prepared foods offered at stores like Whole Foods with a similar focus on produce prices of Sprouts. It has a line of more than 200 better-for-you SKUs under the ‘L’ private label and stores — averaging 30,000 square feet — resemble a farmer’s market with touches such as garage door entrances, and fresh items merchandised in field bins, barrels and wooden crates.

Sharon and his wife Trish are trained chefs who have made prepared foods a signature feature of the Lucky’s offering — an aspect of the business natural products consultant Jay Jacobowitz called “the strategic point of the spear in the fresh quality foods movement.” At Lucky’s this includes scratch-made meal solutions and sides and specialty offerings like house-smoked bacon.

Sharon insisted the offering at Lucky’s was not crafted in pursuit of trends but in the spirit of a “cultural awakening” around food that has coincided with the chain’s growth. Sharon and his wife founded the company as a revamped convenience store outside of Boulder in 2003.

“Everybody says that we’re on-trend now but we’re just doing what we’ve always done,” Sharon said. “Maybe we were ahead of our time, I don’t know.” Sharon said Lucky’s competitive spirit was forged as it struggled to gain the attention of a demanding food community around its original store in Boulder. As Lucky’s grew it has assembled experienced management including veterans of other area natural chains like Wild Oats, Sprouts and Sunflower Markets.

“We founded this company in Boulder, one of the natural food epicenters of the U.S. It’s intense. And we operated as an independent grocer with one store among three Whole Foods, an Alfalfa’a, two King Soopers, a Trader Joe’s, and a Safeway. And one of those Whole Foods is one of the best in the nation I’m told. So, we’ve never been shy to competition,” Sharon said. Stores have evolved so as to better distinguish themselves behind private label items, signature departments and areas like wine and beer and GMO-free candy, “which is really starting to take off now,” Sharon said.

“Our private label program continues to expand. We’re up to more than 200 SKUs our ‘L’ label brand and we’re getting into unique items, really broadening where it becomes a little more of an adventure,” he added.

Sharon confesses that the company occasionally struggles to get its prepared foods at the right price points.

“We make all of our foods on-site and we’re constantly refining them,” he said. “Since my wife and I are chefs we like to push the envelope a little bit, trying to get restaurant quality food without the restaurant price. Sometimes I think we pushed too hard and realized we can’t offer it at the price we need.”

Kroger earlier this year converted one of its QFC stores near Seattle to a new concept called Main & Vine that has a similar emphasis on private label, prepared and local foods, as Lucky’s. At 27,000 square feet, it is also around the same size. Sources have speculated that Kroger could eventually use Lucky’s as an expansion vehicle in places like Florida. “Primarily they want to learn about operating a small fresh store,” one analyst told SN. “But Florida is a nice side benefit.”

Lucky’s operates three stores in Florida and has announced four additional locations. Sharon said Lucky’s was working on additional stores that have not been announced yet.

"[Kroger’s] ability to help us accelerate our growth was exciting to all of us to say the least,” Sharon said. “As we grew this company from one store to where we are today, we were always careful about who we do business with — from vendors to team members. We started as a handful of people who grew this company into where it is today. Was there apprehension? Not once we got to meet the Kroger folks. We speak of Kroger as a massive company you have to remember they are individuals and those individuals are truly people we see eye to eye on. They’re good people. That squashes any apprehension of bringing in a partner.”